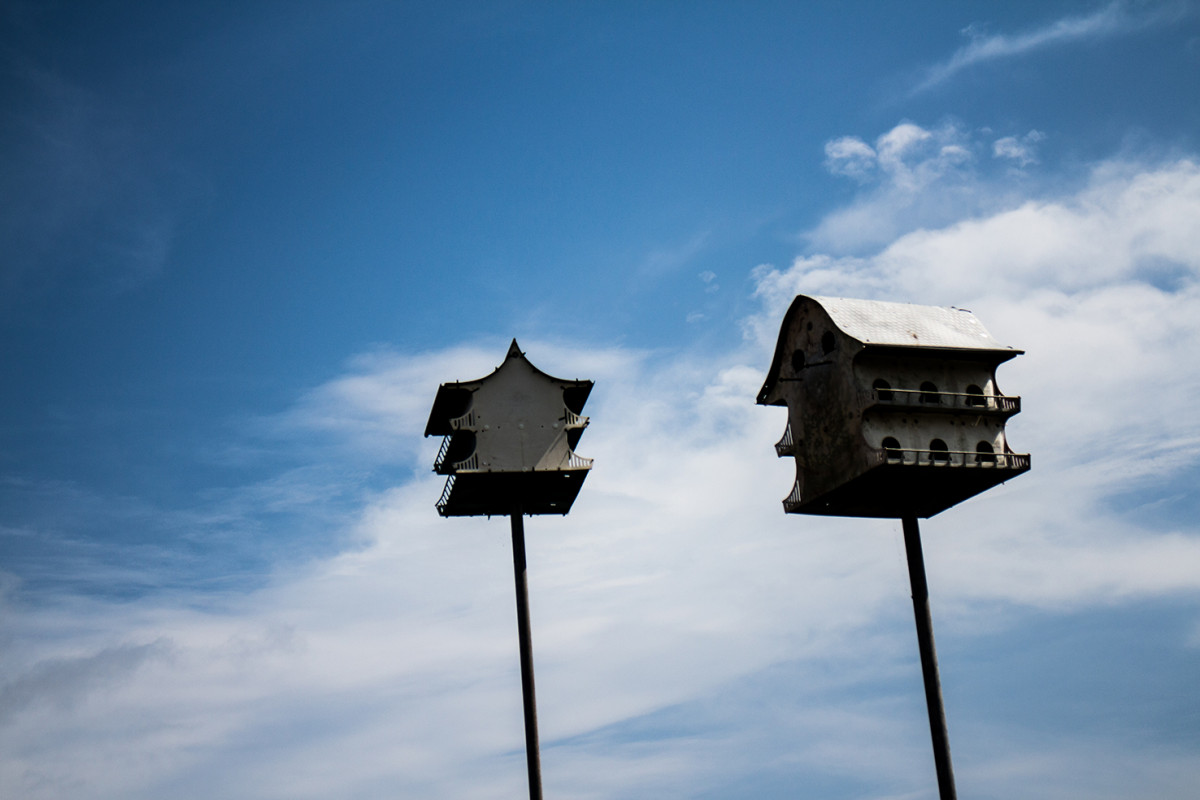 I didn’t make it too far into far into Louisiana before finding my first stop; Merryville Historic Museum. These guys are nice enough to put up cyclists in a little cabin, and they have a warm shower, couldn’t ask for more.

I was sharing with another cyclist who turned up at the same time – Mark McGhee, a bloke from somewhere in Kansas (it’s ok, I bet no one remembers Grimsby either). He was riding a recumbent around the perimeter of the US, a ride that’ll add up to around 12000 miles. I think that pretty much got me to Thailand. We talked bike for a few hours and had a wander round the museum, an experience that Mark pretty accurately described as ‘like wandering around my mom’s attic’. 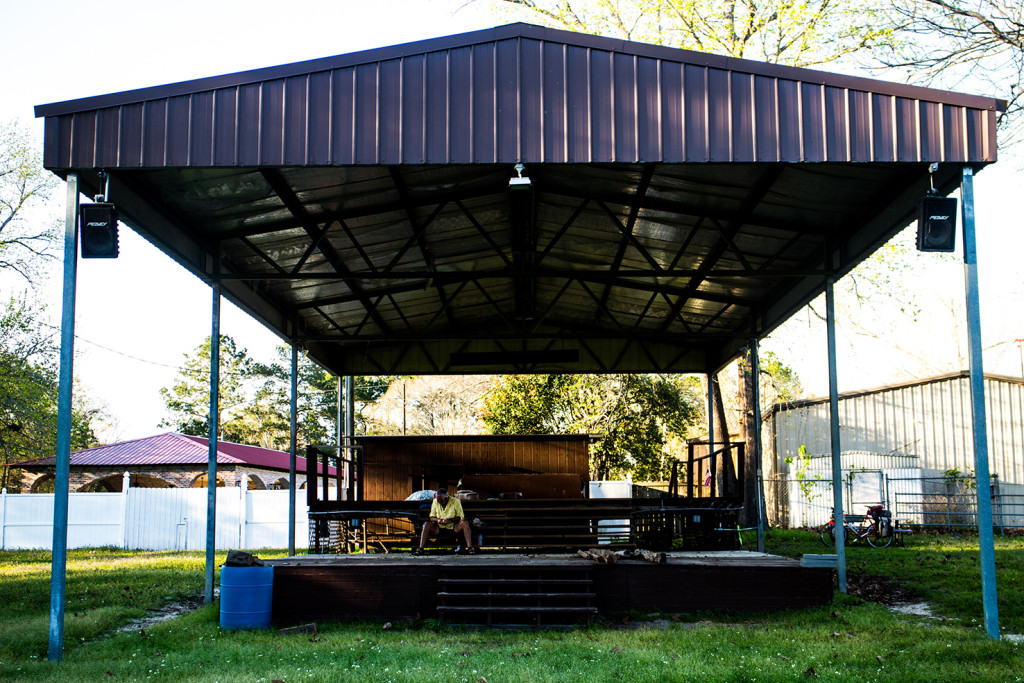 The crowd will turn up one day. 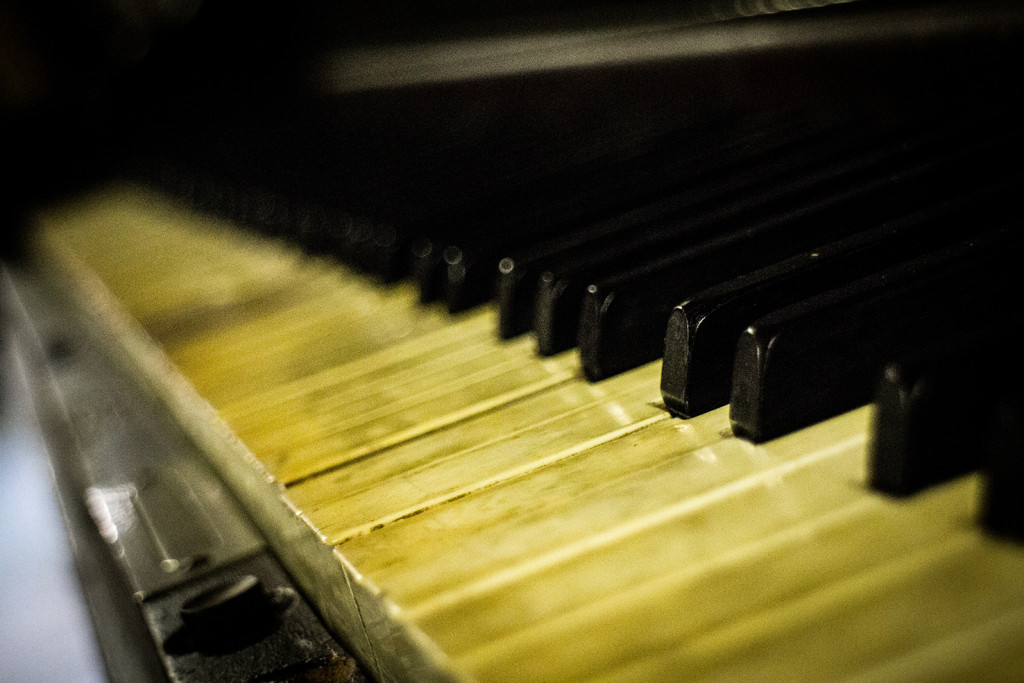 You’d have thought they’d have cleaned things up before sticking it in a museum. 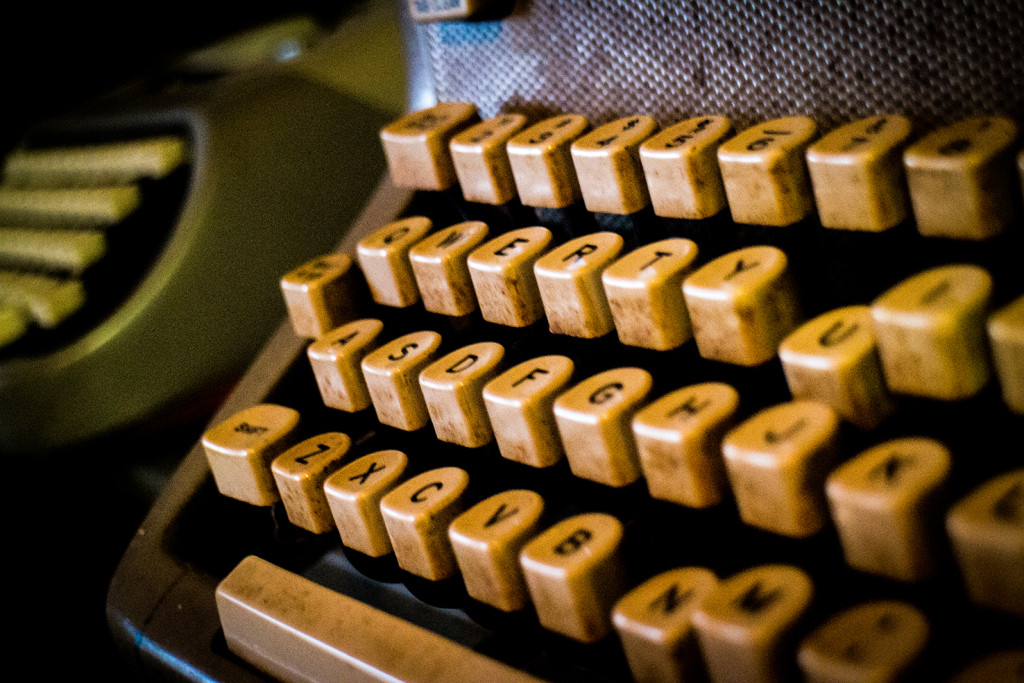 This, much like everything else, didn’t seem to work. 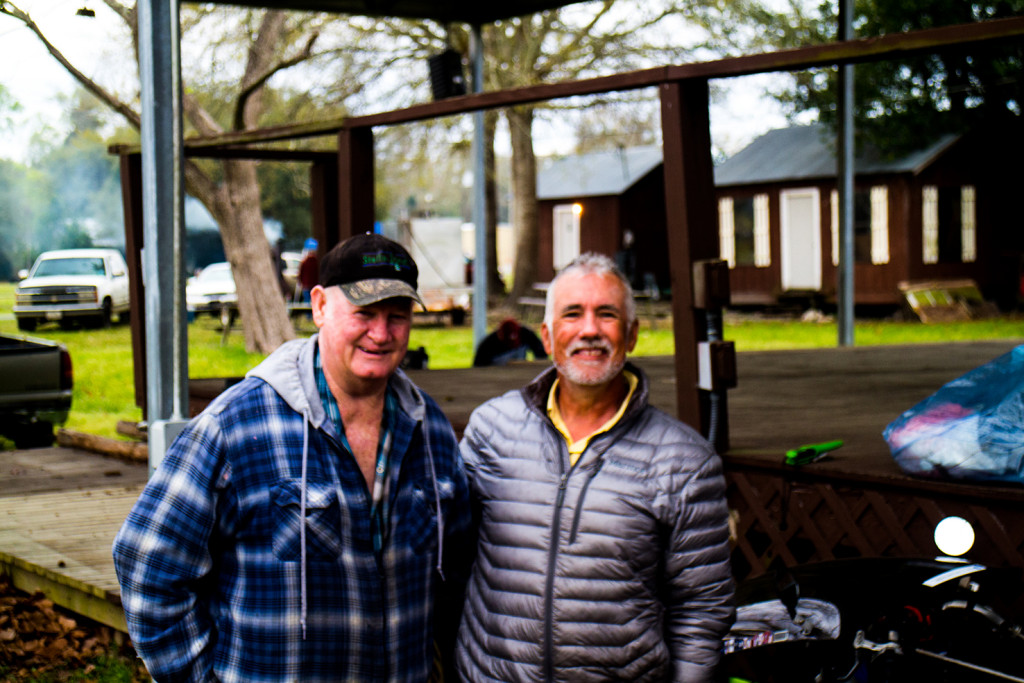 Mark (right), and a guy who I couldn’t understand because his southern drawl was too strong.

Seems I’d run out of luck with the weather, for the next two days I was riding in wind and drizzle, so it was time to pull out the waterproofs. At this point I’m not sure if they even work anymore, and even so, it’s almost a decision to either get wet from rain or wet from sweat, which is like having to choose between a slap in the face or a kick in the junk. 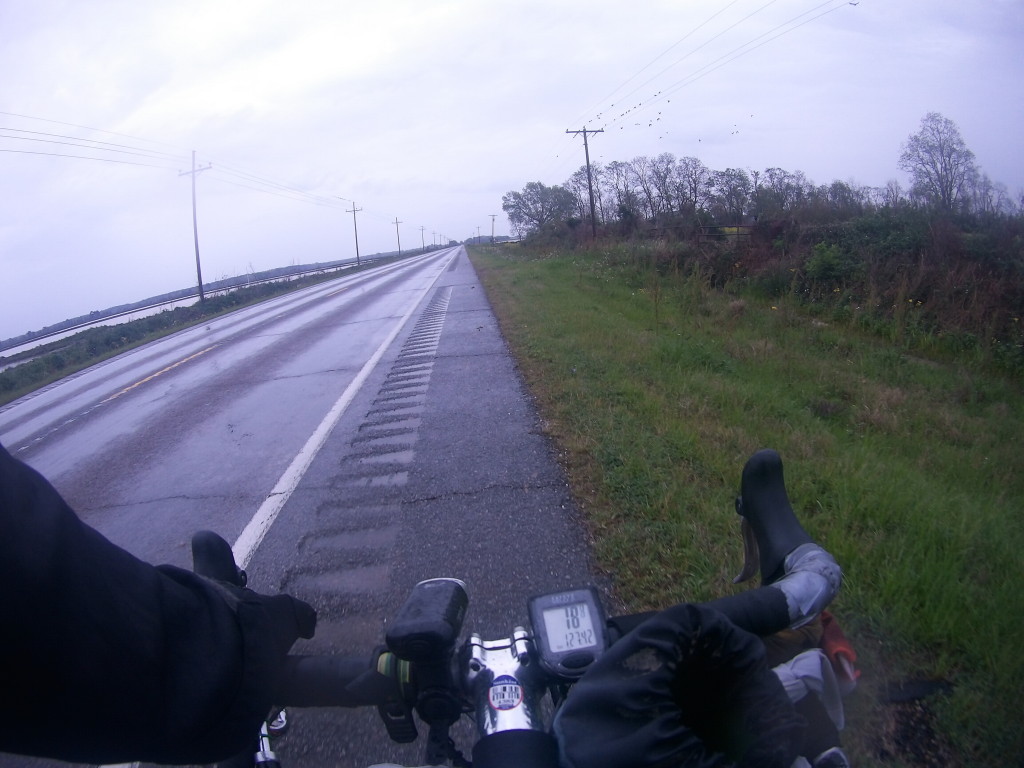 I had lots of this to bike through.

Either way, it was a shit couple of days immortalised by the fact I’ve got minimal photographic evidence of it. Seems I only take photos of the good times, but it ain’t all milk and honey, lemme tell ya.

Wild camping was off the menu for me in west and south Louisiana. In the west the land is mostly crawfish ponds; rice paddys which are then flooded and churned to feed crawfish. They eat a lot of crawfish in Louisiana. In the south, most of it’s swampland, and only Rodney plonkers go camping in swamps.

Fortunately I was lucky enough to have a string of Warmshowers hosts who were nice enough to keep me out of the wind, rain and humidity.

First up was Sarah in Opelousas, who I only managed to chat to for an hour or so. She had a ludicrous training schedule on the go, which consisted of getting up to ride at three in the ruddy morning. That’s not the crack of bloody dawn, that’s the middle of the night. This meant I missed the chance of a photo opportunity.

I skipped through Lafayette, it was a largely grey, uninspiring place that seemed to have a long set of run-down suburbs to crack through before a half decent centre. That sounds like the description of an awful chocolate bar. 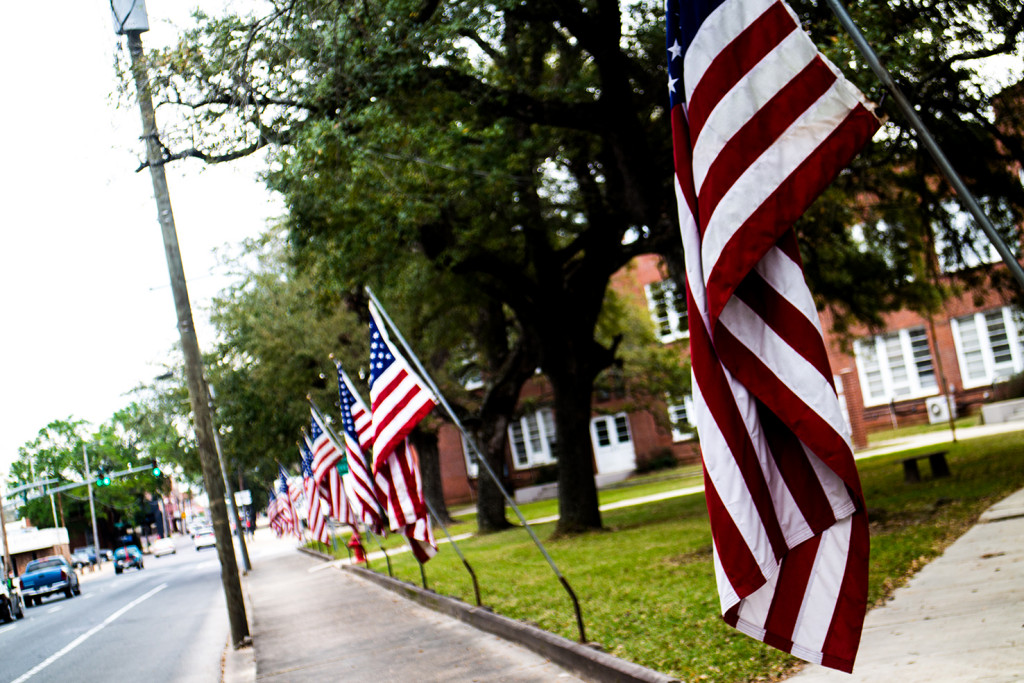 ‘Do you think we have enough flags outside?’ 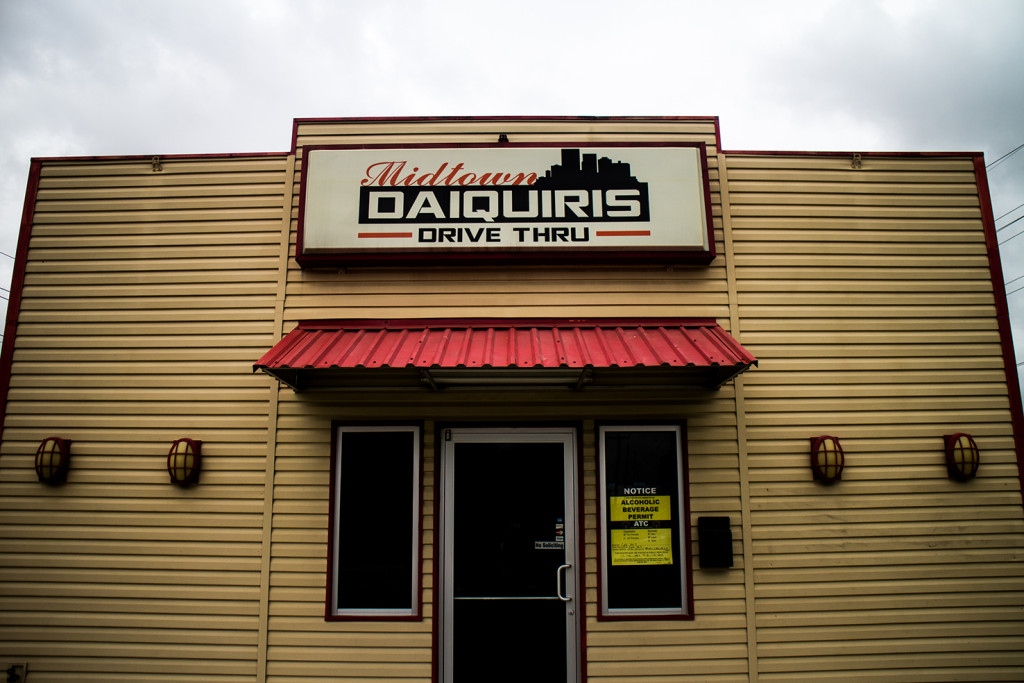 The grey, uninspiring road continued all the way to New Iberia. Fortunately I was staying with Will and Kathy who were totally inspiring hosts. They were lovely to spend time with, totally welcoming, and I could’ve chatted with them for a lot longer, but that’s the nature of the game. Their place was interesting too; completely filled with antique fans, I’m talking hundreds. The childish voice in my head told me to turn them all on, it took all of my willpower to ignore it. 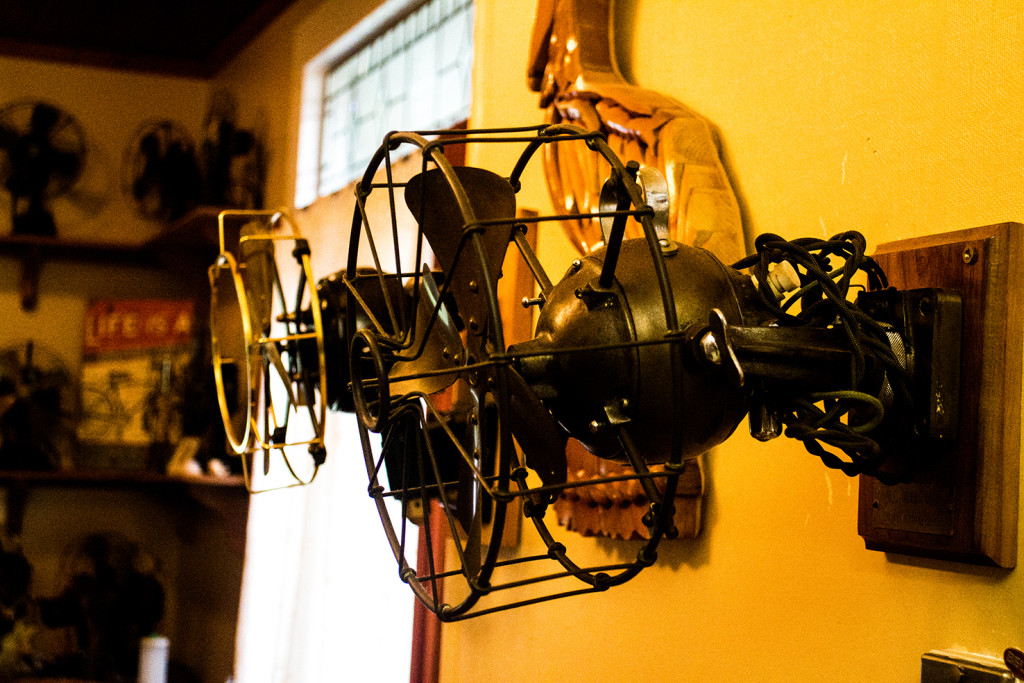 This one was from a big famous ship that I’ve forgotten. 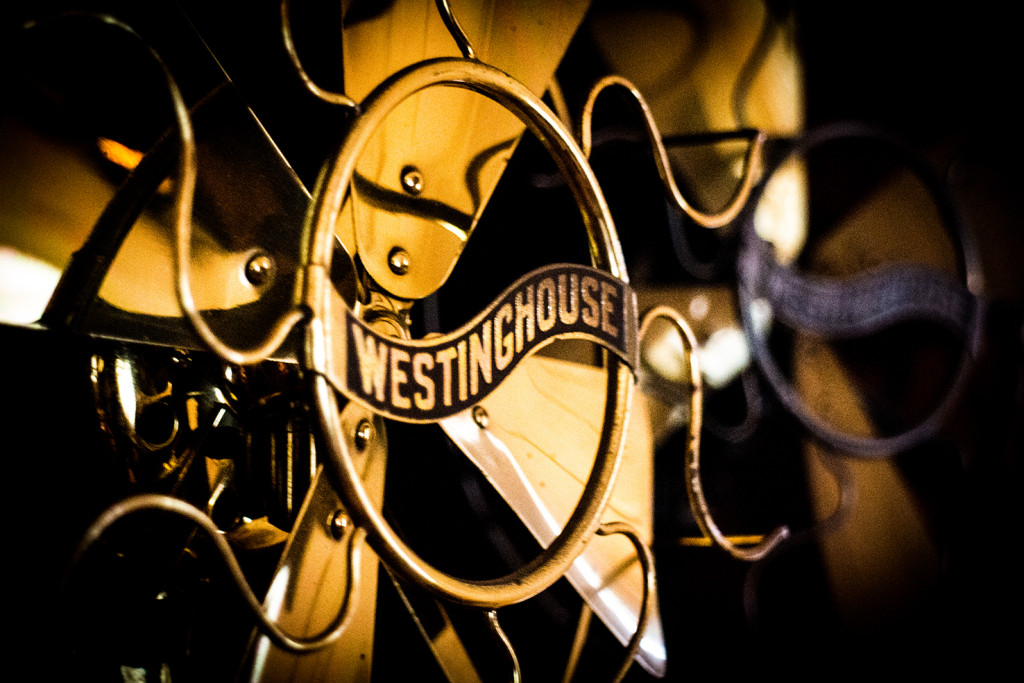 I liked this one. 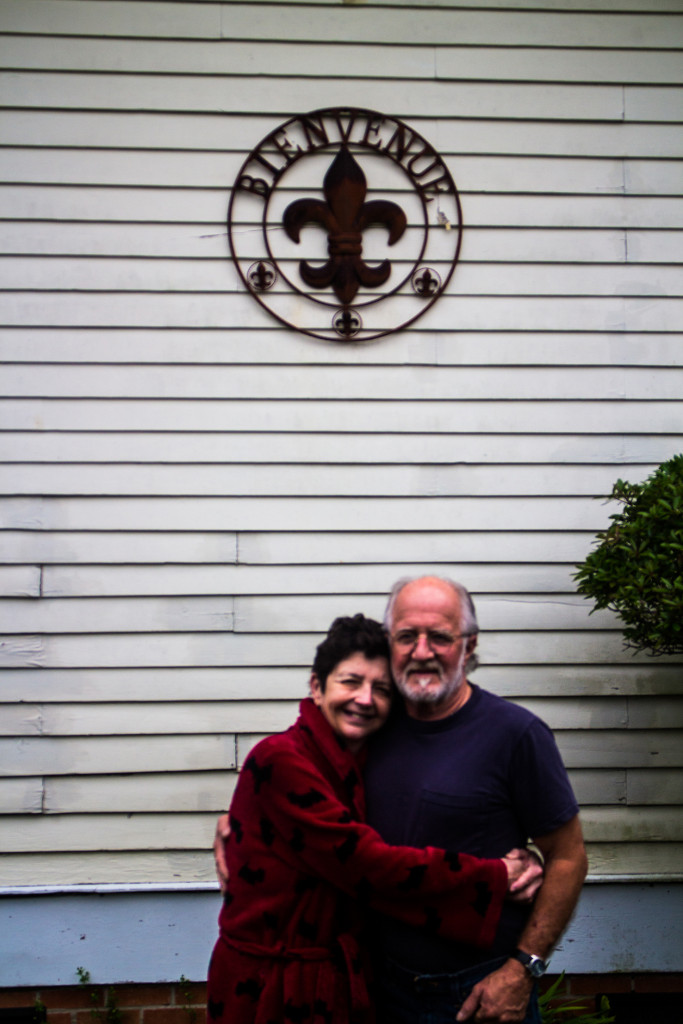 Ironically, I had headwind the next day all the way to Houma, where I was staying with Ray and Vanessa. At this point I was starting to think I controlled the direction of the wind with the way I was cycling. I did read somewhere there’s a prevailing westerly wind. Lies, chocolate covered lies. 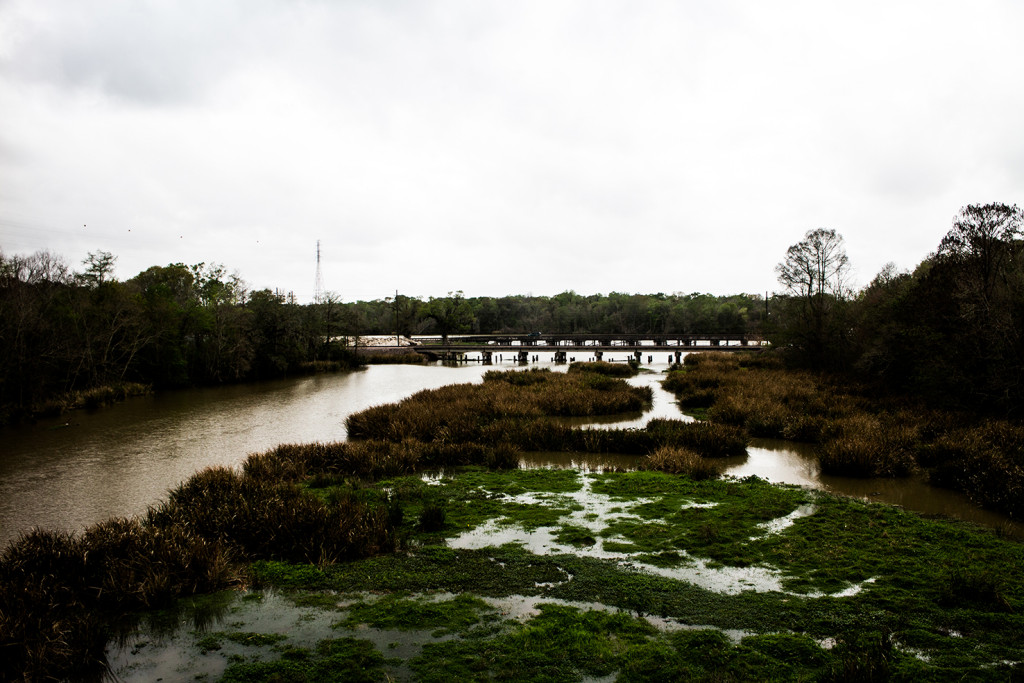 There was a lot of swamp around.

I managed to get to Ray and Vanessa’s just before the thunderstorm I’d been trying to outrun decided to flex it’s muscles. I’d also managed to meet both Ray and Vanessa on separate occasions before I’d even got there. I suppose when you’re hosting a guy who’s cycling really far, chances are he’s the bloke with all the bags strapped to his bike gunning it down the shoulder of an extremely busy road. 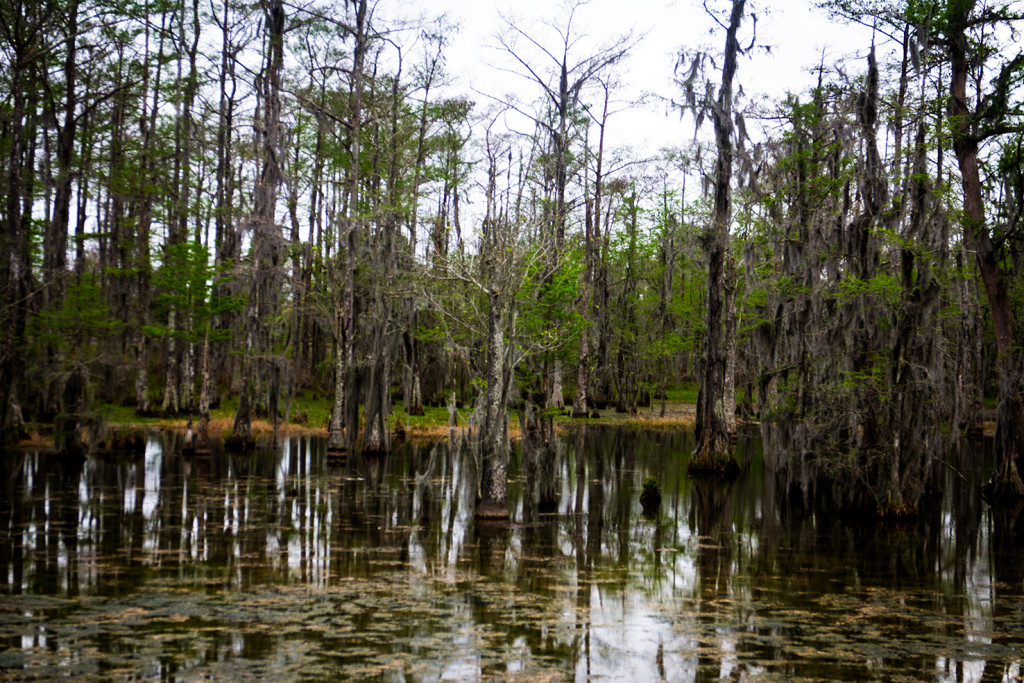 Warmshowers make cycling solo a whole lot easier. Not only in the sense that you get to hose yourself down and sleep in a normal place, but also in the way of genuine conversation (I’m not including talking to myself in a Scottish accent here). I swear people who host me must think I’m this extroverted, chatty bloke, but it’s probably because I’ve been on my own for days on end. 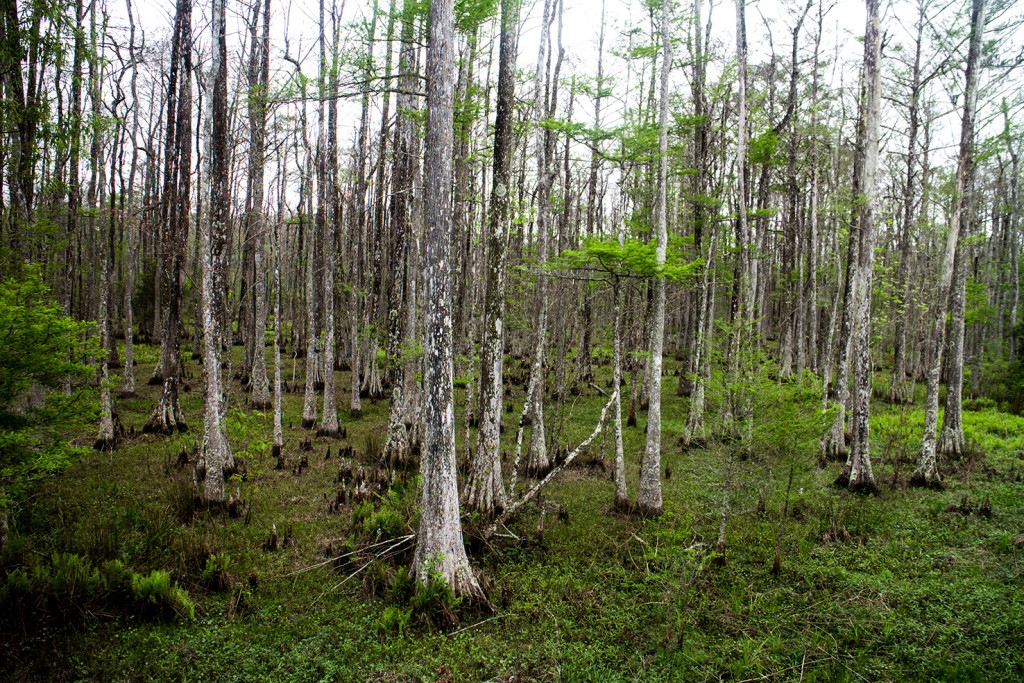 There were a few little alligators around. They’re bloody hard to get a photo of though.

Seeing as though Ray was living the early retirement dream, he joined me for a ride the next morning. Lucky really, as I did’t have any kind of route planned, which is nothing new. If Ray were to come out of retirement, he should probably become a tour guide. We went on a ride that meandered through swamps, sugar cane refineries and wound up in a little swampside dive bar that boasted the world’s best Bloody Marys. As someone who dislikes Bloody Marys, this one was alright, which kind of suggests it’s up there.

After our lunchtime energy drink, Ray pointed me in the right direction and I went on my way. Unfortunately, just as I decided to split, so did my front brake cable, and the cable housing wasn’t playing fair which ruled out a roadside repair. 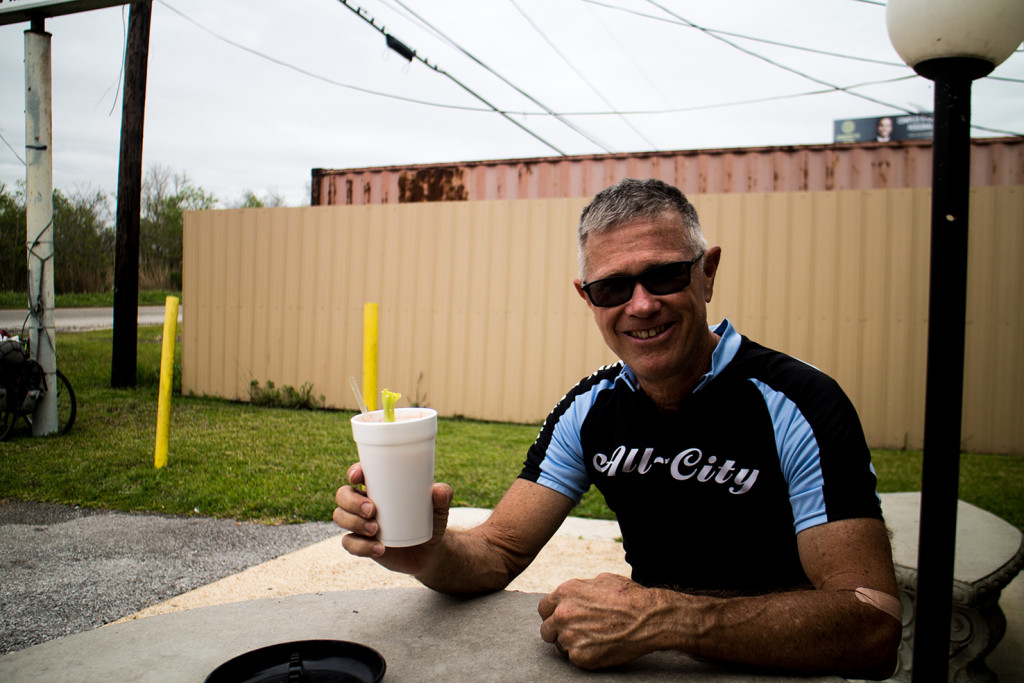 Just like every other American city, New Orleans was a complete ball-ache to cycle into. A copper stopped me just as I was eyeing up one of the bridges over the river. He told me that this bridge was my only shot at cycling over, and that if I stopped for any reason he’d have to come get me, and he wouldn’t be happy. I was more worried about the decline on the other side; halting the Buggernaut on a downwards trajectory with only a rear brake would be no mean feat. I asked what pedestrians did in order to cross the river.

Of course. Americans wouldn’t use their bloody legs now, would they?

N’awlins was alright once you got into it. It had something that resembled character which most American cities lack, I had good fun sweeping round winding roads that were lined with overhanging trees in some funky neighbourhoods. Unfortunately my downtown motel was five miles downtown in a shitheap of a suburb. I only stayed for two days. I cut it short after listening to a bloke trying to kick down a nearby door down whilst yelling death threats for three hours in the middle of the night. I just stuck my earplugs in. By the number of coppers around in the morning, it must’ve escalated. City life, eh?

Post-N’awlins it was pretty much swampy coastline all the way out. There’s a surprising amount of knackered houses and debris remaining from Hurricane Katerina. In the poorer areas of New Orleans and Louisiana they didn’t have the cash to rebuild, so they probably came back to recover what they could before moving elsewhere, and seeing as the state doesn’t have the cash, the damage remains. 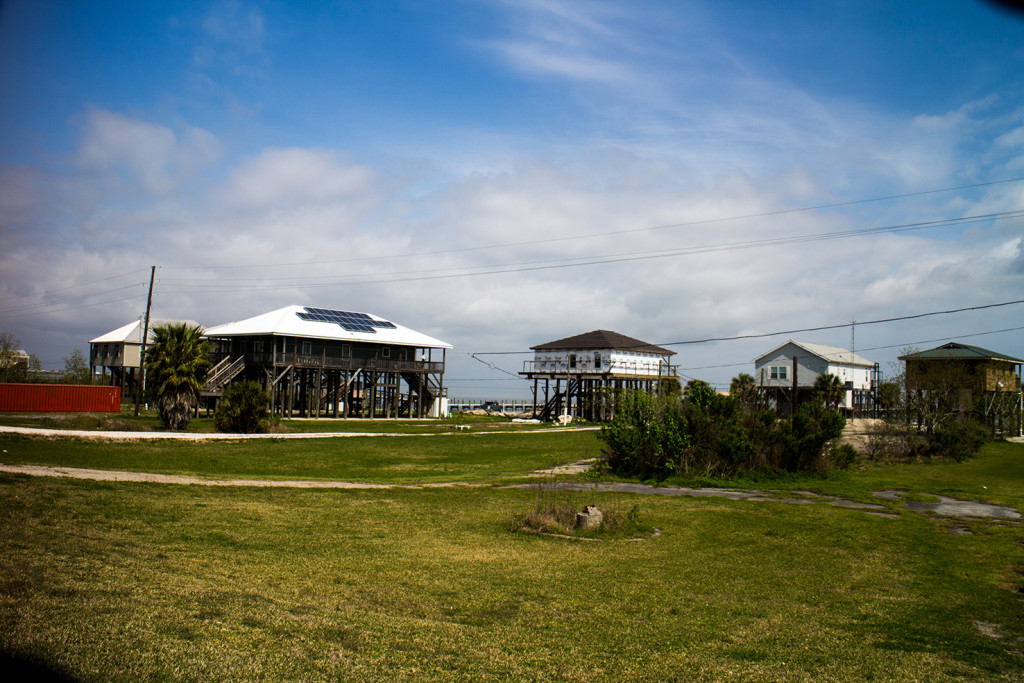 Lots of houses on stilts around here. I never figured out why.

On a slightly cheerier note, just before the Mississippi border I saw a bunch of turtles basking on a cypress tree root. As I passed they all panicked, pulled their in their limbs, lost balance and fell into the water with a comical plop.

I was giggling for hours. 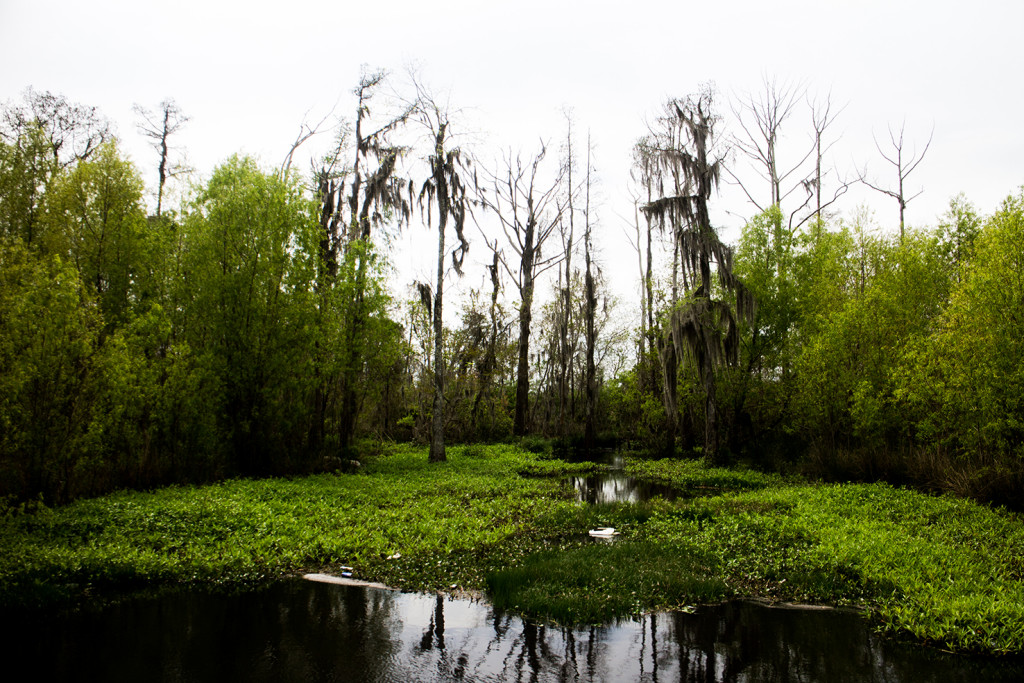