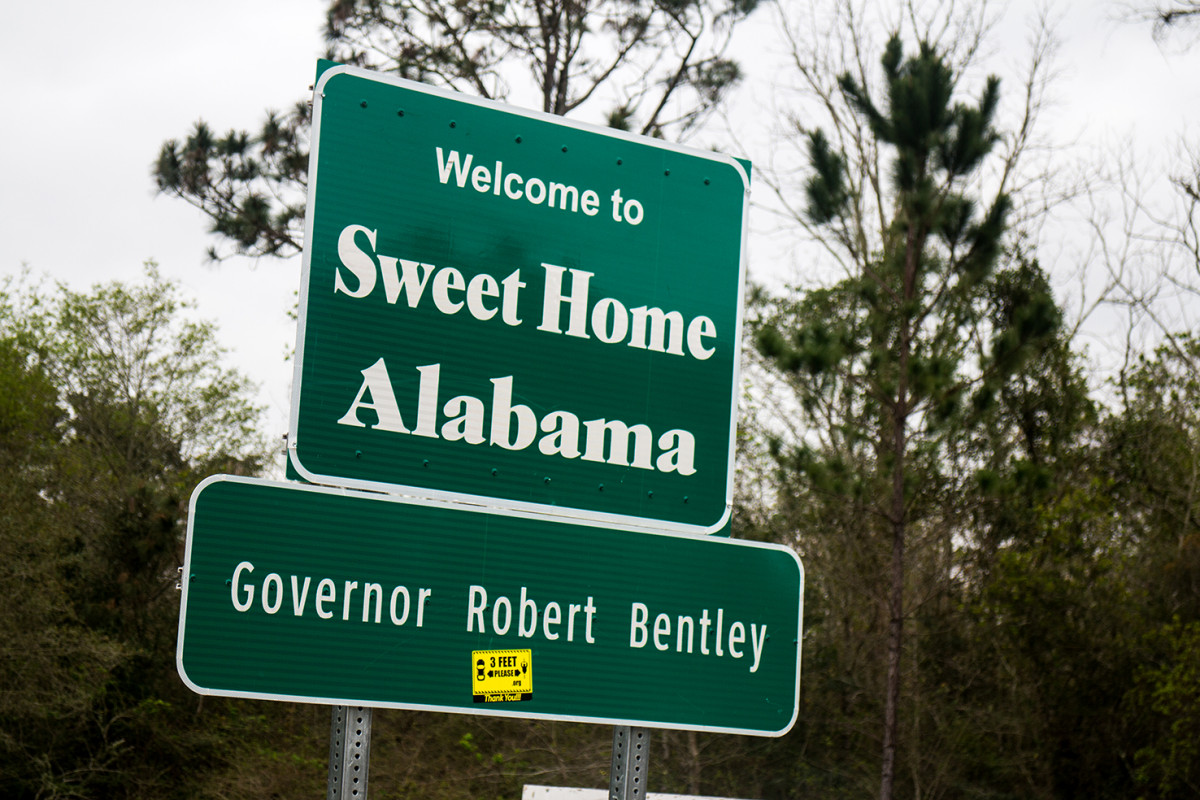 I’d put a lot of thought into how to deal with them just after I crossed into Mississipi; I’d strung up my food to give them a fun plaything and collected a pile of small stones to throw at the little bastards. In the end I’d needn’t do either, the torrential rain kept them at bay, and it was close to running me out of town – my campsite was nearly flooded by the time I gave up waiting and high-tailed it. 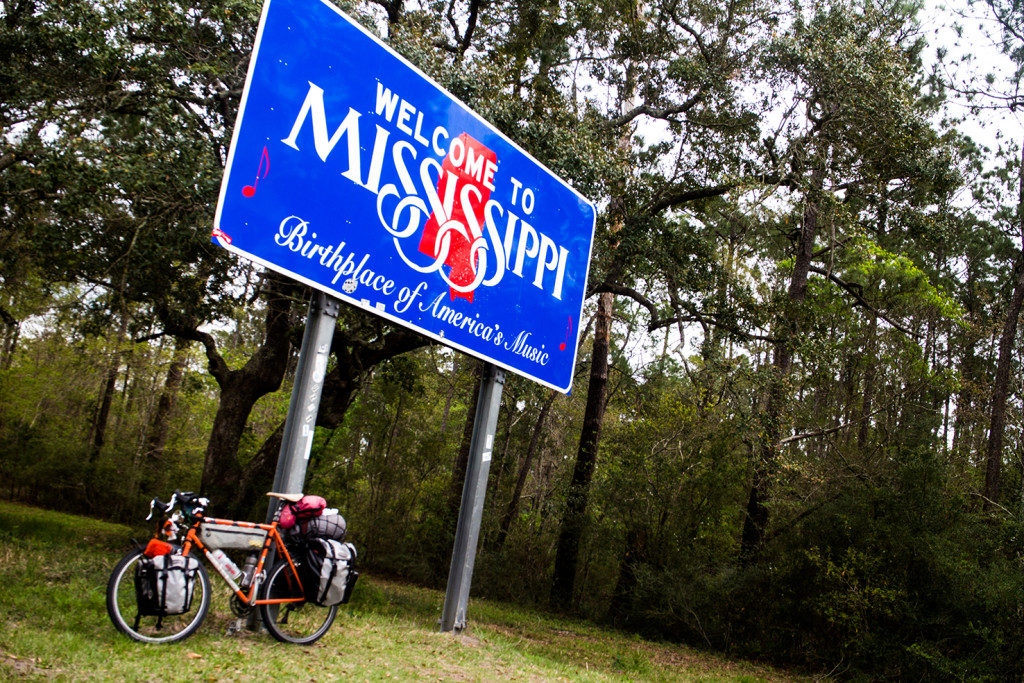 One strung up bag of food. 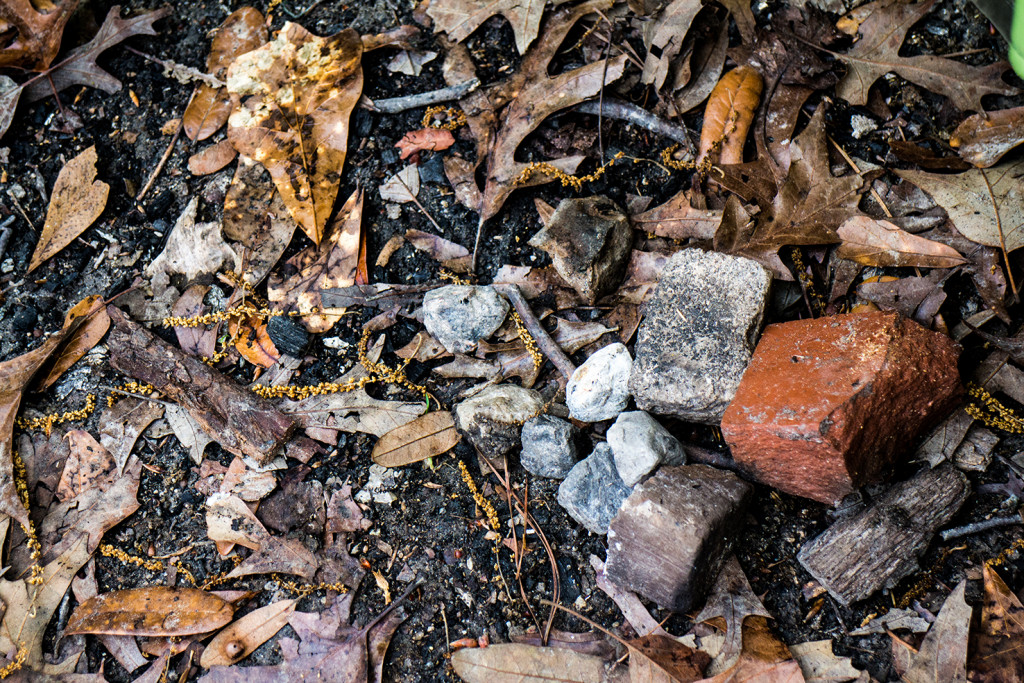 A collection of rocks to throw at raccoons. 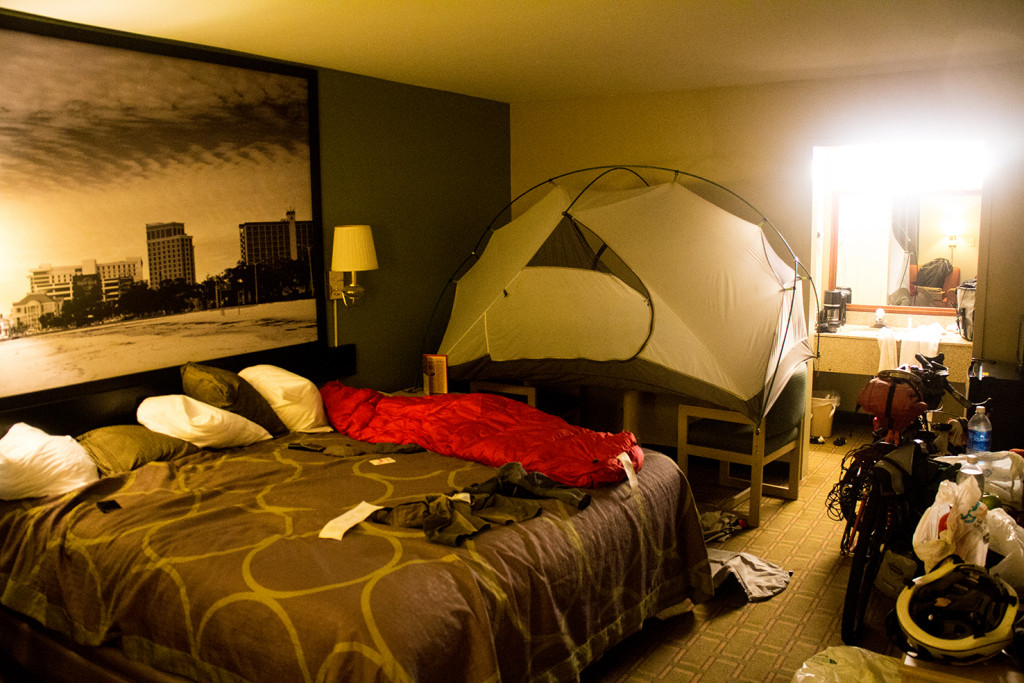 This is how I hotel.

Subsequently, I have pretty drab memories of Mississipi. I spent a lot of time in various McDonalds sipping one dollar coffees whilst drying out and soaking up free wifi.

By the time I reached Dauphin Island the weather had dried up a bit. Warmshowers had lead me to Jon and Jan’s place, which is apparently another Southern Tier staple. They’re hardly ever there, so they let you camp underneath their house on stilts, which in cycle touring terms is relative luxury. 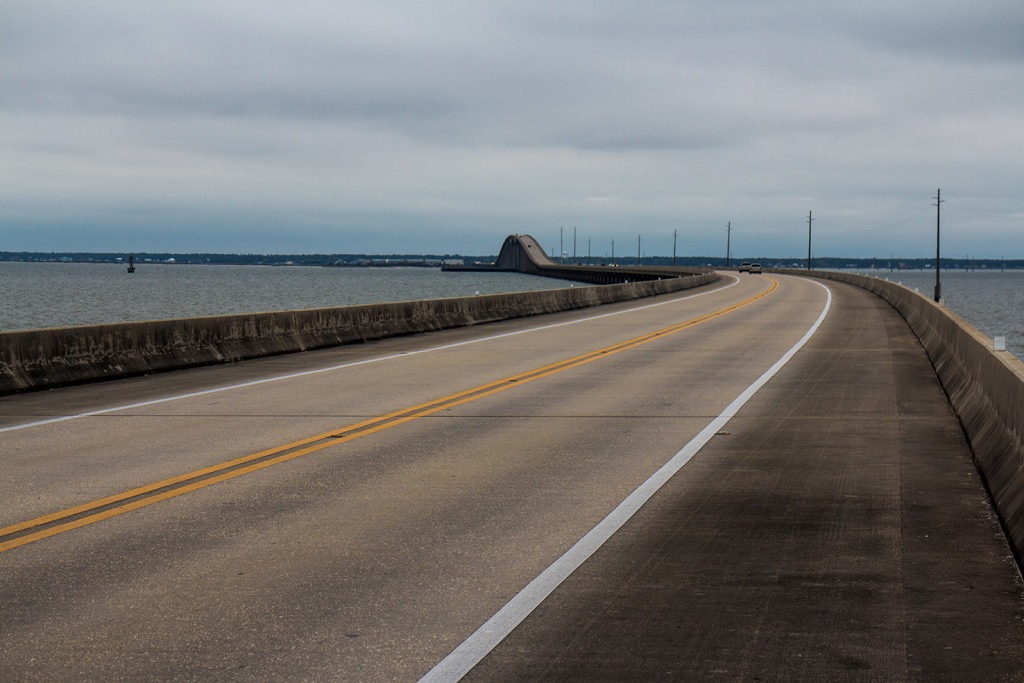 The bridge to Dauphin Island. 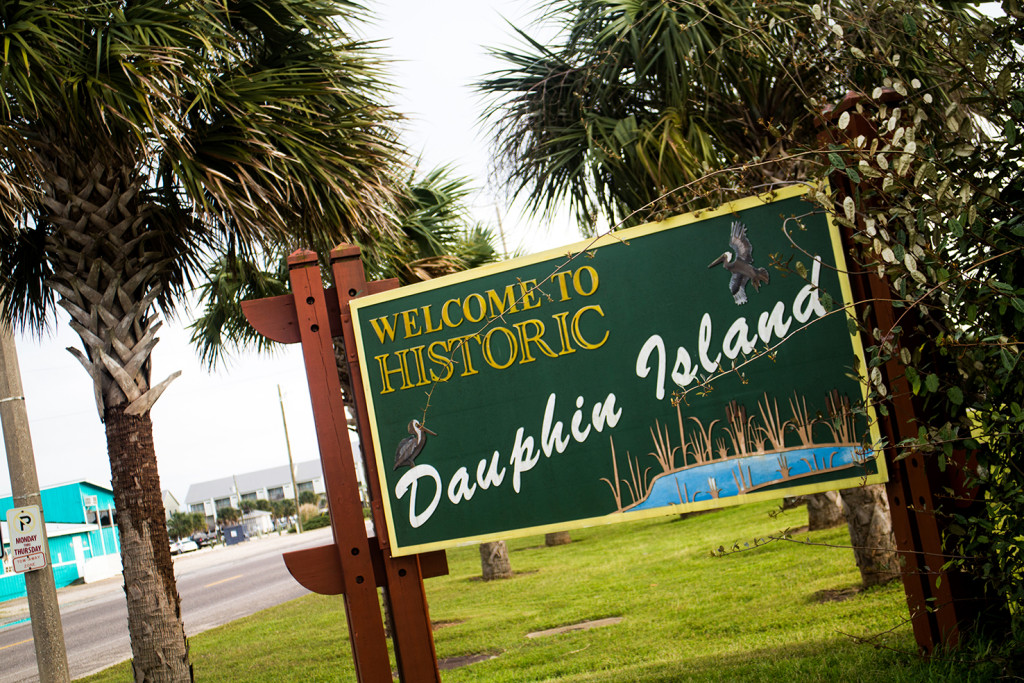 Lot of money around here. 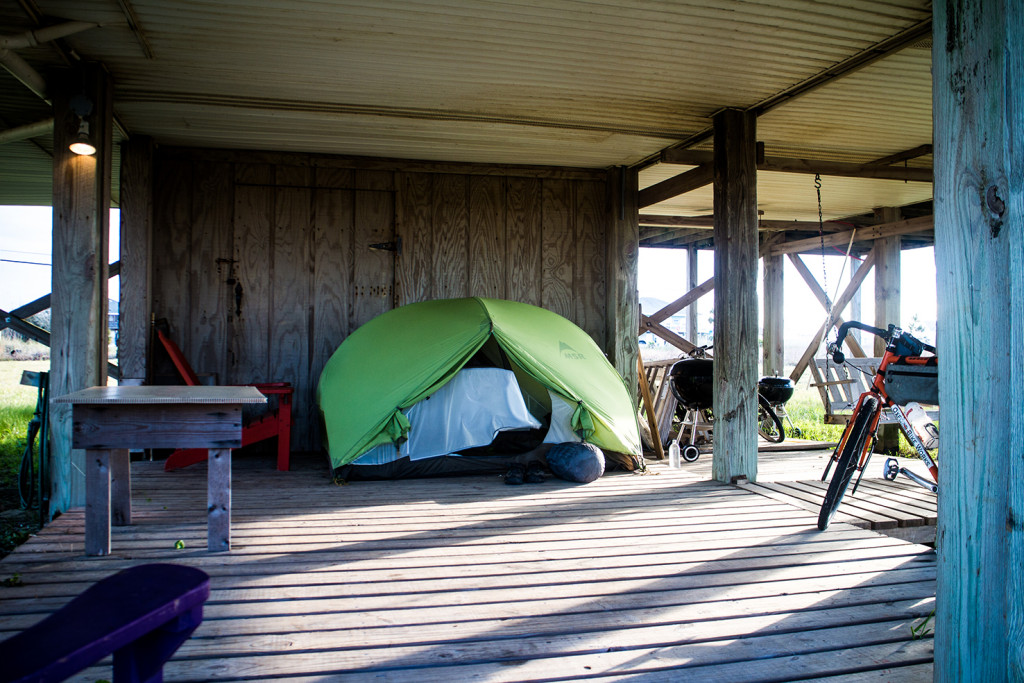 My lodgings for the evening.

It was a short ferry ride over Mobile Bay to Fort Morgan. Apparently my ability to spot decent wild camping sites is stronger earlier in the day. There’s plenty around Fort Morgan, if anyone reading this is cycling through. 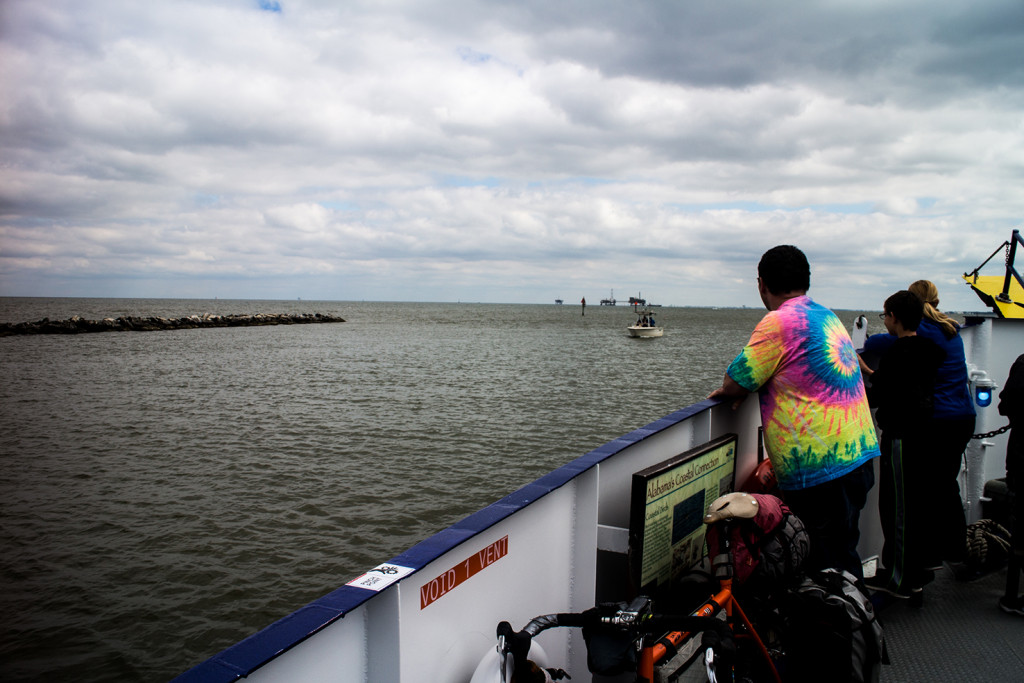 An unremarkable ferry ride made remarkable by a fat guys tie-dye t-shirt. 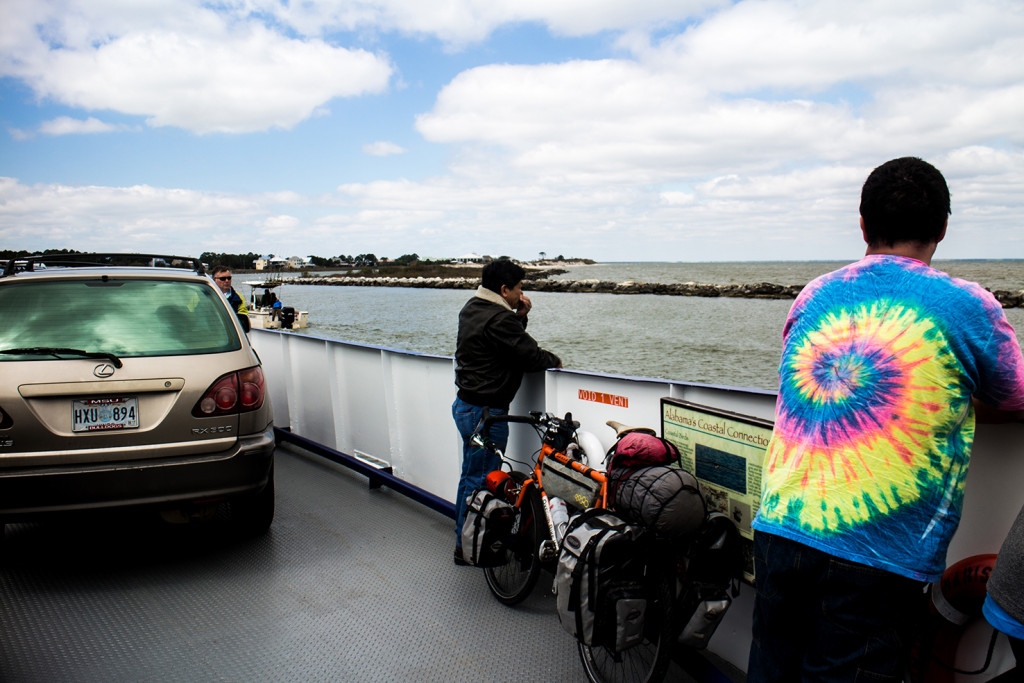 Had to get another shot.

I bumped into some British lads heading the other way along the peninsula. I’m not going to lie, it was nice to hear a familiar voice, and judging by their reaction they thought the same; as soon as I’d said ‘Alright mate’, he shouted –

‘Are you British?!’ before spinning round and confirming ‘He’s fucking British!’ to his mate.

We could’ve done with a bit longer than twenty minutes at the side of the road, they were sound lads. They were also meant to have been staying at John and Jan’s the previous night, which would’ve been a right laugh. Unfortunately it wasn’t meant to be, so we traded tips on what’s ahead and parted ways.

Shortly after I headed inland a bit towards Foley, where I had a Warmshowers host called Justin. Justin managed a bike shop, and as I turned up he asked me if I needed any work doing. I took one look at the Buggernaut, as it politely sat outside, and declined the offer. At that moment it was running just fine, but in the back of my mind I knew something would break, like when you’re trying to let the dog out for it’s last leak of the day, only to be spurned and then wake up to a sodden carpet in the morning.

Justin was a lovely bloke, incredibly intelligent, and also involved in loads of local community projects. He’d recently cut and cleared a huge trail around some local forest, which if I wasn’t lugging around a 50kg bike I’d have had a go on.

As the night progressed however, Justin told me some incredibly violent stories from his childhood. The main one being about when his soccer coach was attacked and killed by a machete-wielding meth addict, and how he and his 12 year old teammates all reacted; some running, some vomiting, some losing consciousness, and some being rooted to the spot in fear (Justin).

It was probably a mixture of the ludicrousness of the story, and my incredibly dry sense of humour that lead me to ask — ‘Do you still play soccer at all?’

Despite this, Justin was a cracking host. I’d probably say this though — Justin, if you’re reading this, just tone it down on the ultra-violent stories a touch. 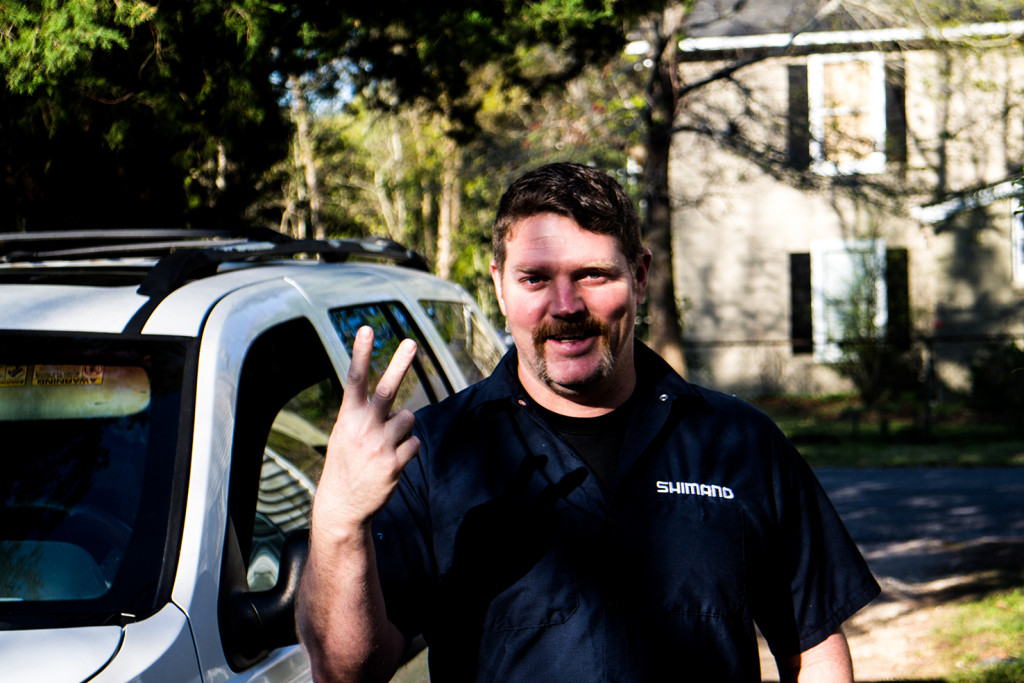 This is Justin. He liked me. Honest.

Alabama was a hell of a lot better than I’d anticipated, didn’t see that one coming. My lasting memory of crossing the bridge into Florida was a seagull being an absolute dick and repeatedly dive-bombing a couple of dolphins below. Animals being dicks — always entertaining. 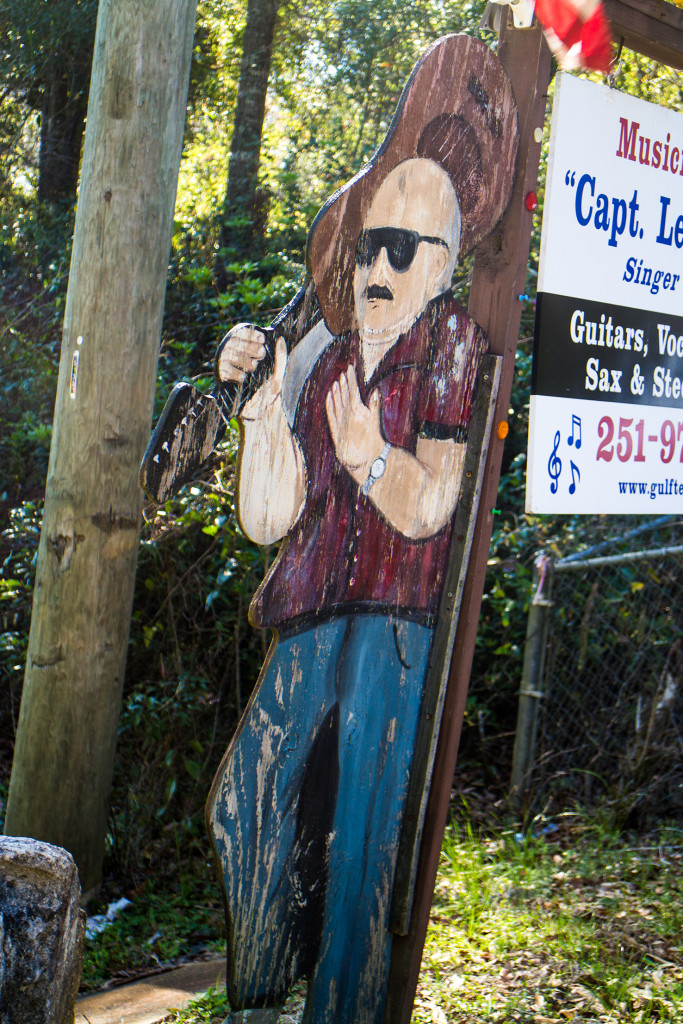 Mike Briggs has been moonlighting in Alabama. 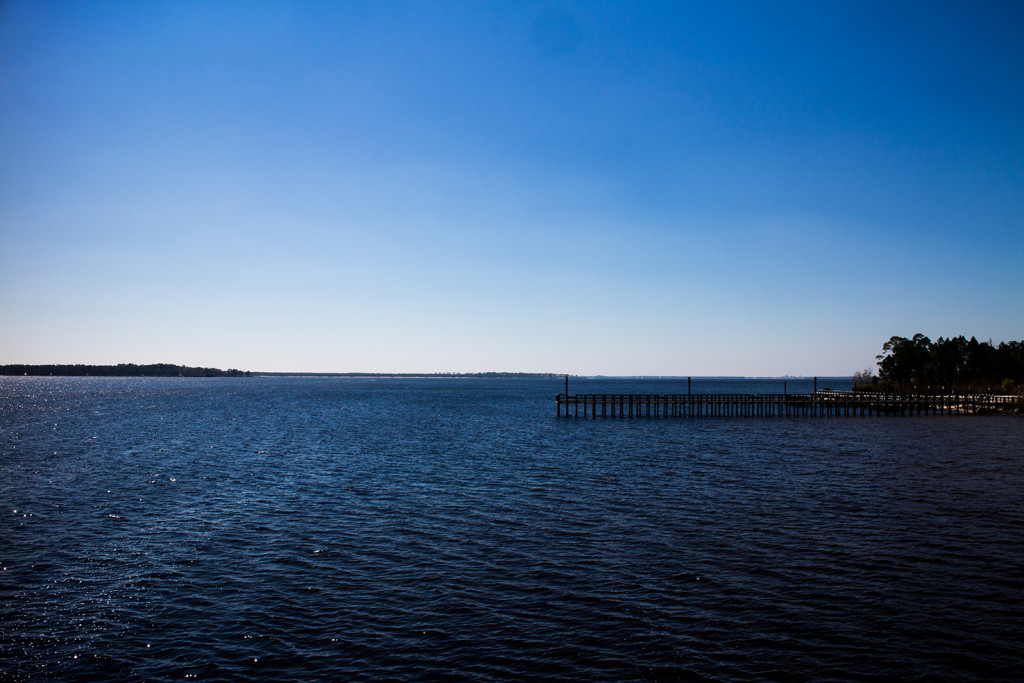 I think this was an attempt at photographing some irritated dolphins.