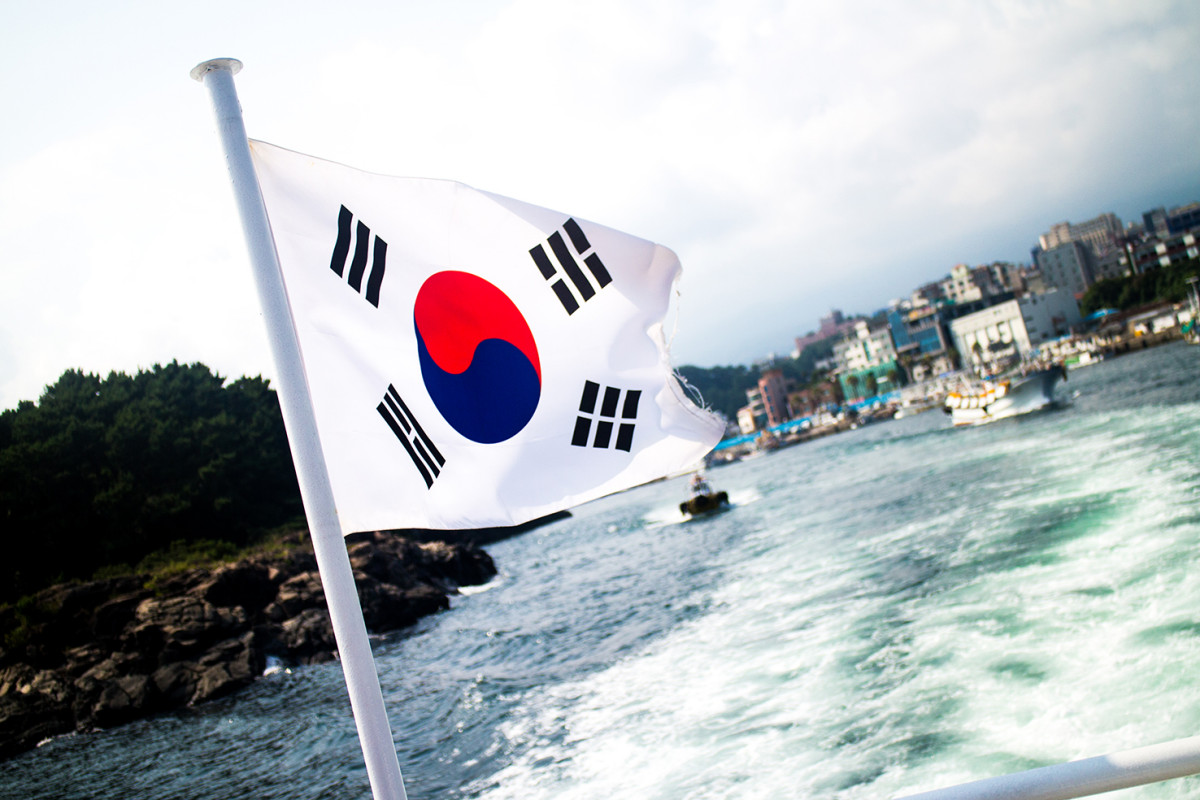 ‘You are going to hell.’

Some of the first English words spoken to me in South Korea. Maybe I shouldn’t have told him I just wasn’t that religious, or maybe he should tone down his sales pitch.

Top tip for cycle tourers flying into Incheon airport — it’s probably not worth unboxing your bike in the lobby like an excited five year old at Christmas, the airport’s on an island accessible only by motorways and road traffic police will pull you as soon as you give it the beans towards the bridge. That just leaves you the train, which is a pretty slick operation, but you’re only allowed bikes on at weekends; I got lucky. 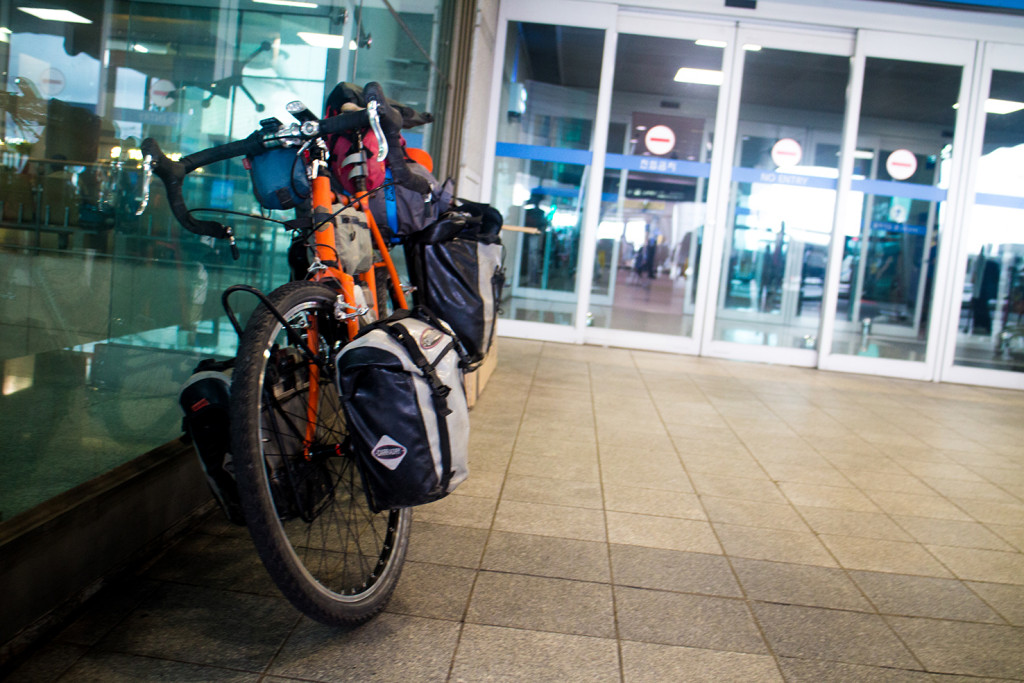 As far as city riding on a touring bike wider than Bernard Manning’s arse goes, Seoul was alright, and in comparison to the mosh pit of some Eastern European or Asian cities it was like ballroom dancing. Fun times don’t last though, and as I was rolling down some roads lined with decent looking bars and cafés I overtook a garbage truck that chewed into some bags and fired out some stinking yellow sludge all over me. Face, glasses, the lot. For the rest of the ride I just sounded like Joe Pesci on Home Alone.

I tend not to talk about cities all that much, but Seoul is worthy of a mention. Maybe it’s because I was expecting something far more chaotic and comparable to Chinese cities, but it just seemed a bit more civil and dignified than I’d expected.

After a couple of city days mostly wandering around, drinking and eating the weirdest food I could find it was time to climb aboard The Tangerine Dream for part two. 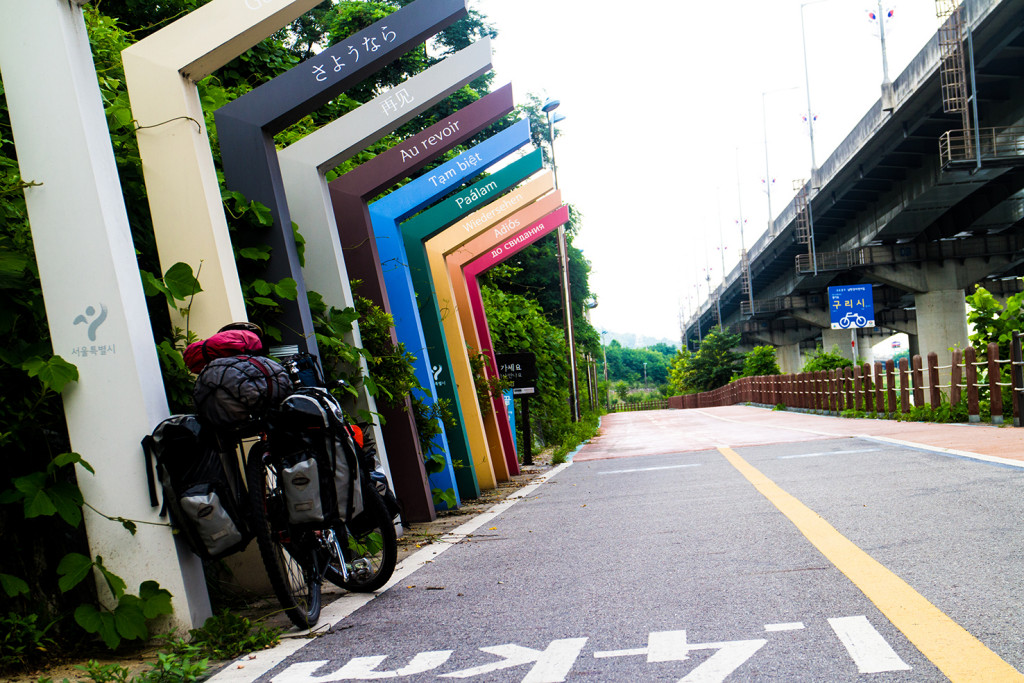 The plan then. The plan was to get myself down to the South Coast, and seeing as though the South Koreans have opened up a dedicated cycle path from Seoul to Busan, it’d be rude not to take them up on the offer. I’d not be going all the way though, I’d be going off-rails to jump on a ferry over to Jeju to have a good old fashioned knees up with Korea’s finest ex-patriots Callum Hornigold and Bex Wells. Then I’d get myself a ferry back to the mainland, ponder over to Busan and somehow manage to get over to Japan. Easy.

Time to get out of Seoul. 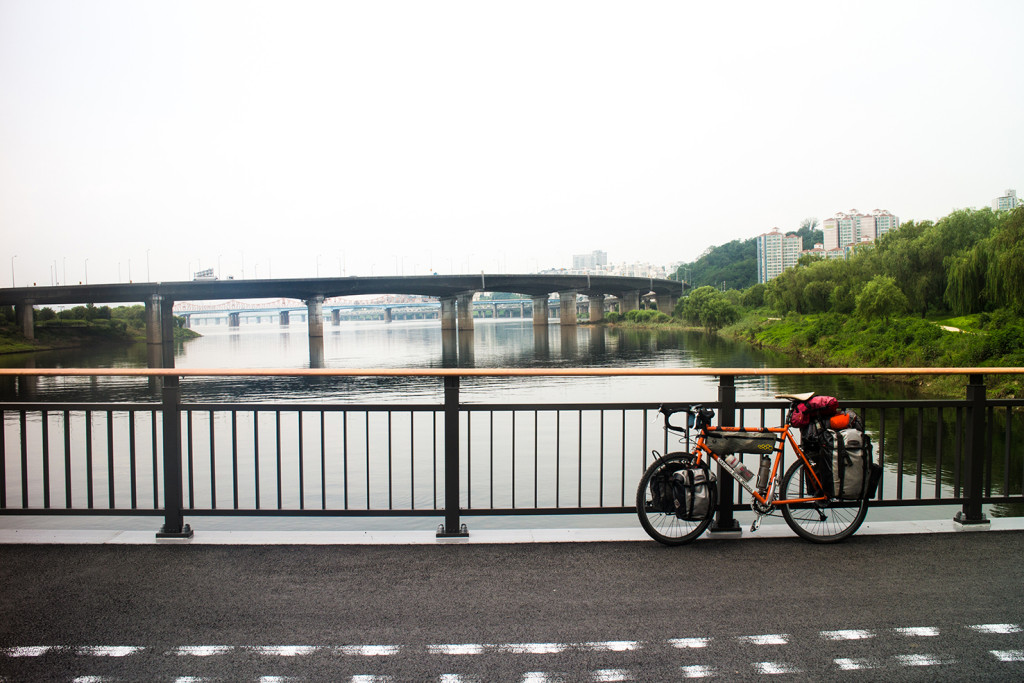 Getting on the cycle path to Busan is simple — go to the river and cycle along it in the clearly marked path in an Easterly direction. Can’t go wrong.

It was twenty kilometres later when I checked my GPS to find out I was on the wrong river and heading out towards North Korea. Bollocks.

First impressions of the Four Rivers cycle path to Busan were pretty good. It gets a lot of use; there’s plenty of people rolling up and down, although they all seem to be decked out head to toe as though they’d wandered into the nearest bike shop, emptied their wallet on the counter and uttered ‘cycling’ through a dribbly grin towards a shopkeeper with blisters on his hands from rubbing them together so much. Ever seen a handlebar mount for an iPad? I’ve seen plenty. 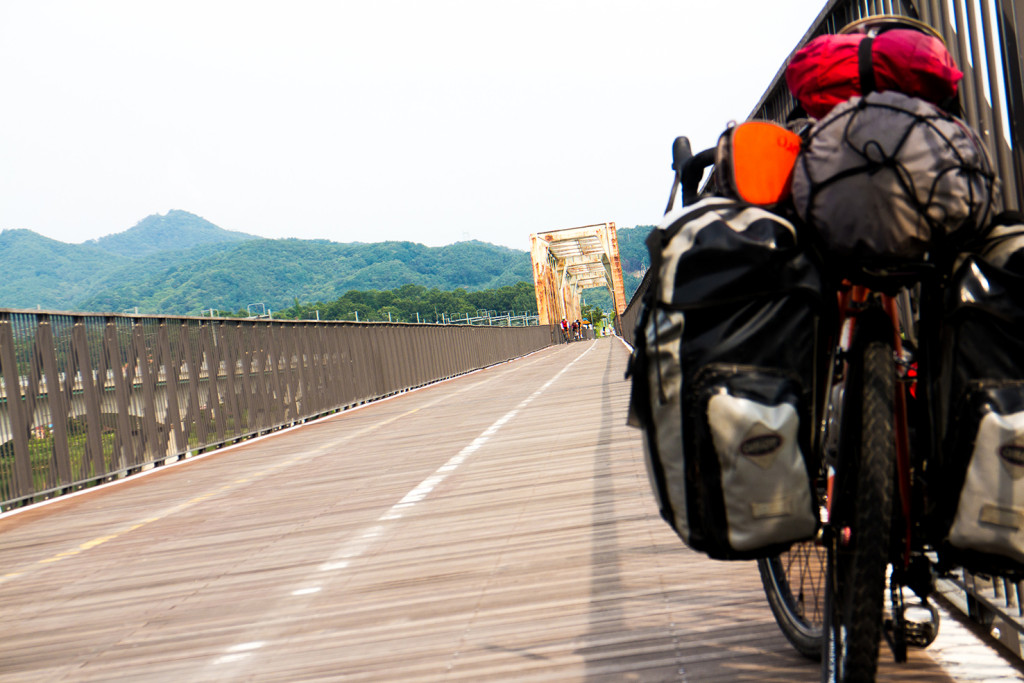 There’s plenty of stuff to keep you entertained on the path. You’re next to a river all the time which manages to meander through plenty of parks that have water stops. At the beginning you can pick up a nice little passport which you’re supposed to stamp in little telephone boxes along the way, and if you collect them all you get a shiny medal to take home along with a sticker for your bike. Obviously I missed the first one, so I sacked off the entire thing. 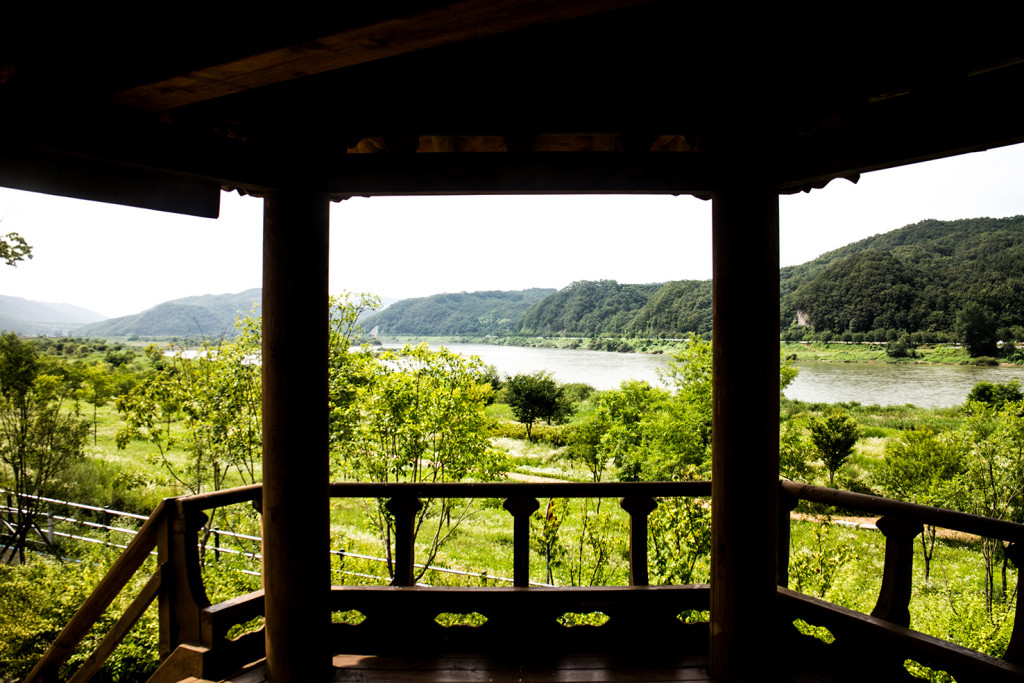 The Koreans have put a lot of elbow grease into making this path top notch, Some stretches are old train routes that have been redeveloped which go over wooden bridges and through LED lit tunnels, others are sections that overhang the river following the hillside. It must’ve cost an arm and a leg, and after chatting to some English speaking locals, apparently it was the former government that got the wheels moving on it, and that the new regime have put the brakes on a bit. Even so, there’s new routes on the East and West coasts opening in the next couple of years. 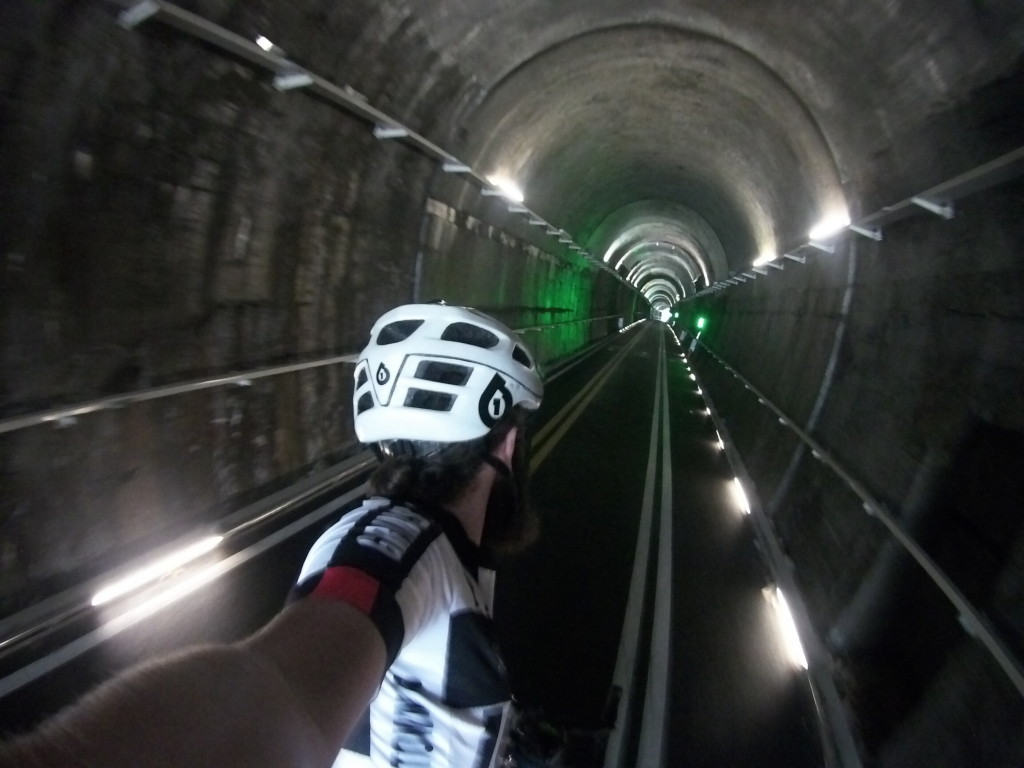 I was worried about the camping situation in Korea, with it been pretty small and rather densely populated and all. Fortunately, finding somewhere to stick a tent wasn’t that much of a problem, plus no one seems that fussed about having a sweaty, hairy bloke on their patch, and usually you can bag a place with a tap nearby for a rudimentary hosing down. 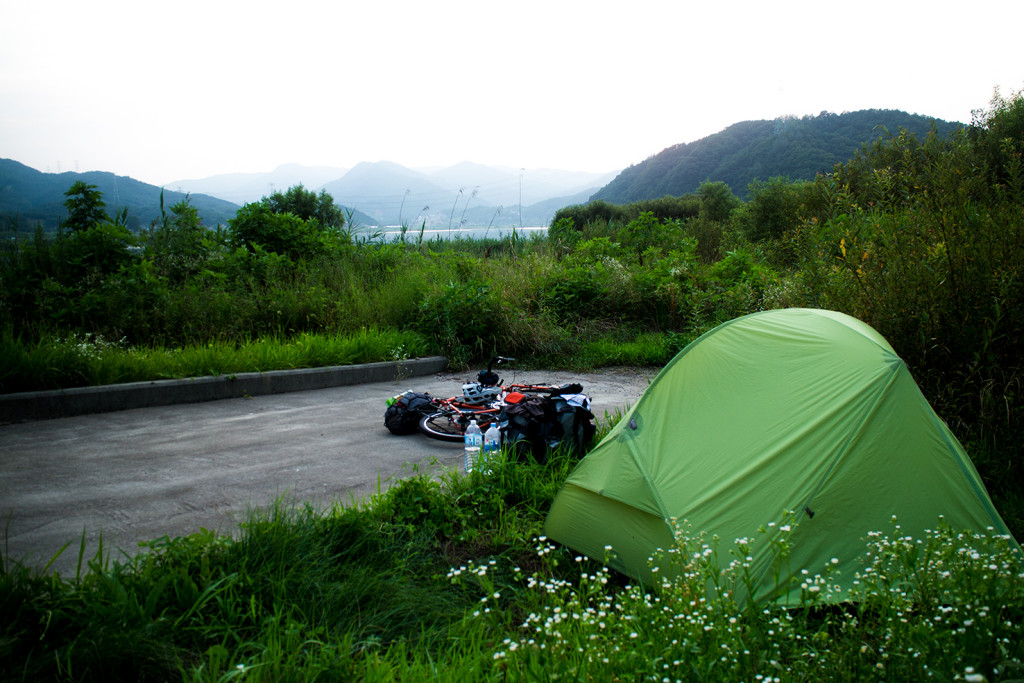 The morning I was woken by two Korean women shouting ‘YAA-HO!” repeatedly.

On the second night I managed to roll up to a few roadside pagodas and met another cyclist heading for Busan called Jong Kul, a teacher from Seoul. He had a fun bag of tricks including some chilli jam that was far more chilli than jam, and a big bottle of barcoli, Korea’s second alcoholic beverage. 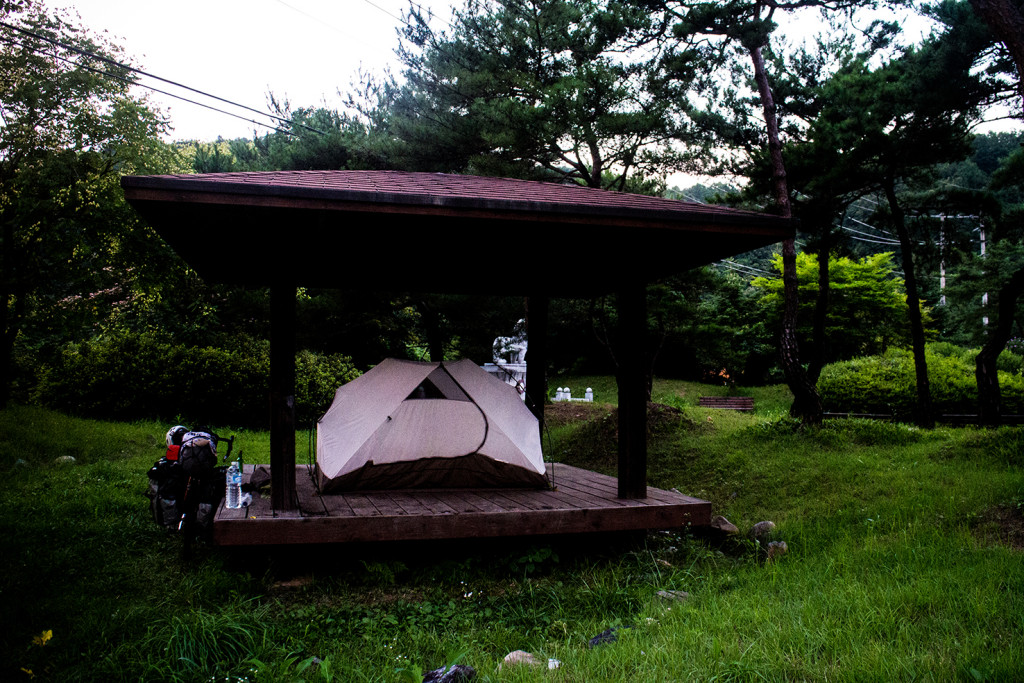 Now I’d already got more than familiar with Soju, it was my camping companion by the second night. It kind of tastes like a watered down gin with the slight texture of drool, ranking in at a brisk 14% and comes in a variety of flavours, my own personal favourites were lemon and watermelon. All yours for roughly one English pound. A bargain at twice the price. 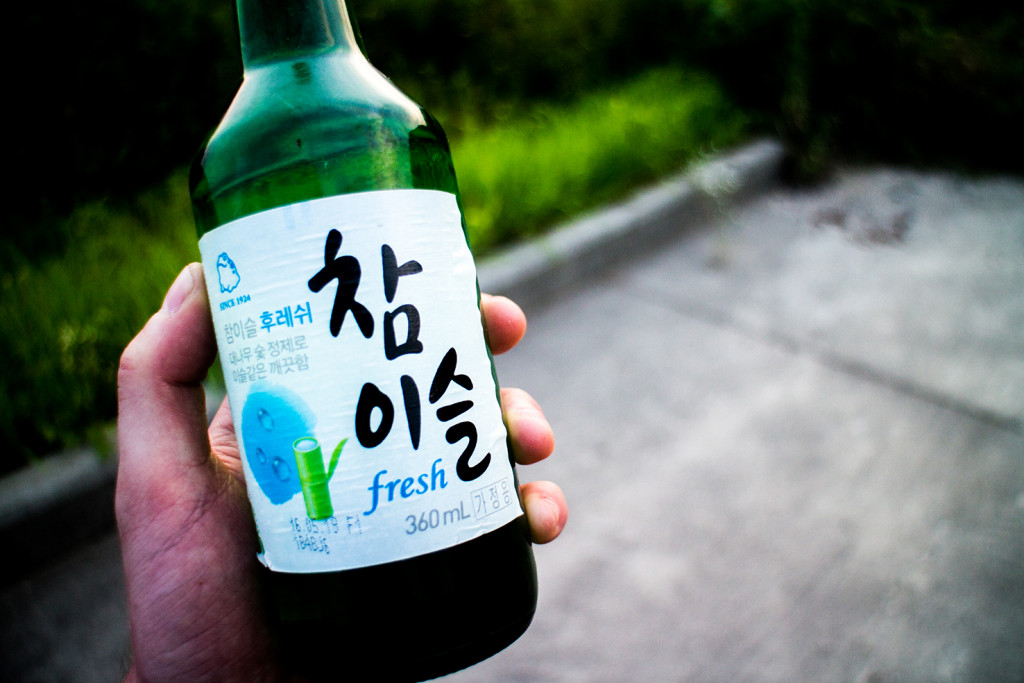 Barcoli was a bit of a different one; it’s kind of like a fermented fizzy milk. Apparently if you manage to sample the more rural homemade variations it gets a bit thicker. Lovely. I’ll take the Soju please.

I’d never really thought of South Korea as a place where I’d struggle with heat, but after a few days I’d turned a lovely shade of red and managed to perspire so much my shorts had a layer of white dust on them; salt from all of the dried sweat. At least campside cooking would be tastier. 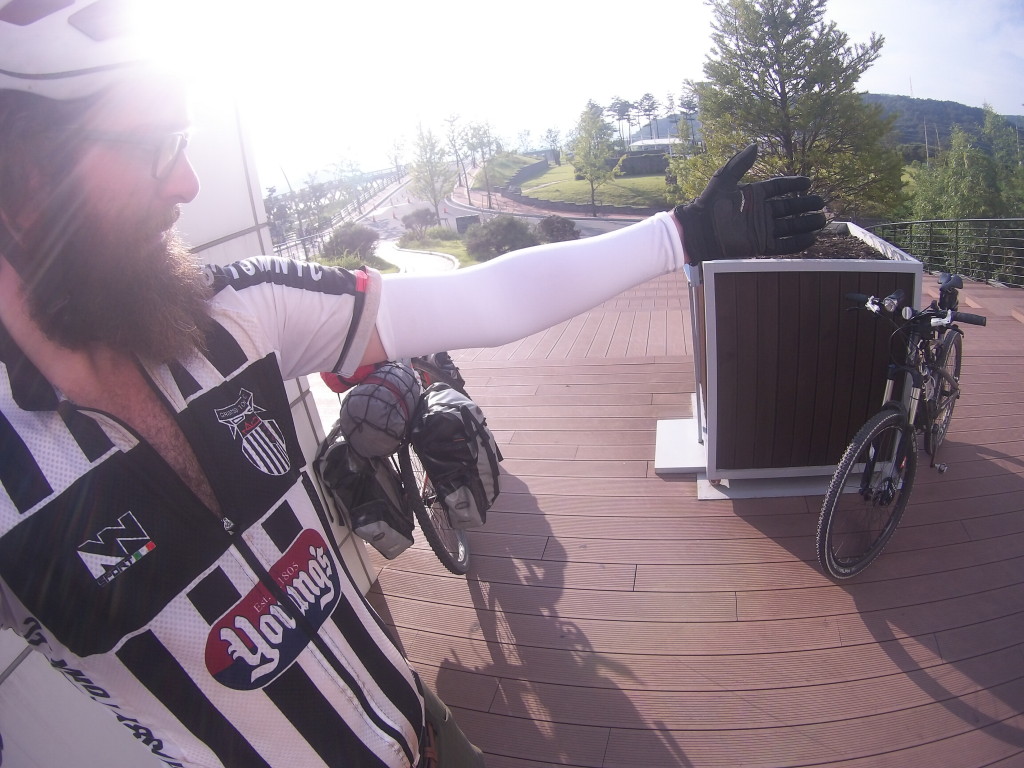 I bought myself some sleeves to stop my arms looking like crabsticks.

Now here’s a bit of proper cycle touring chat. When you’re sweating about four litres of fluid a day, you get wet, and when you’re wet, no matter how much of a luxury saddle you’ve got between your legs — Brooks, Fi’zik, your Nana’s double-wide padded springy affair, you’ll be walking like John Wayne with shitted britches in no time.

It’s got a wonderful ring to it, hasn’t it? 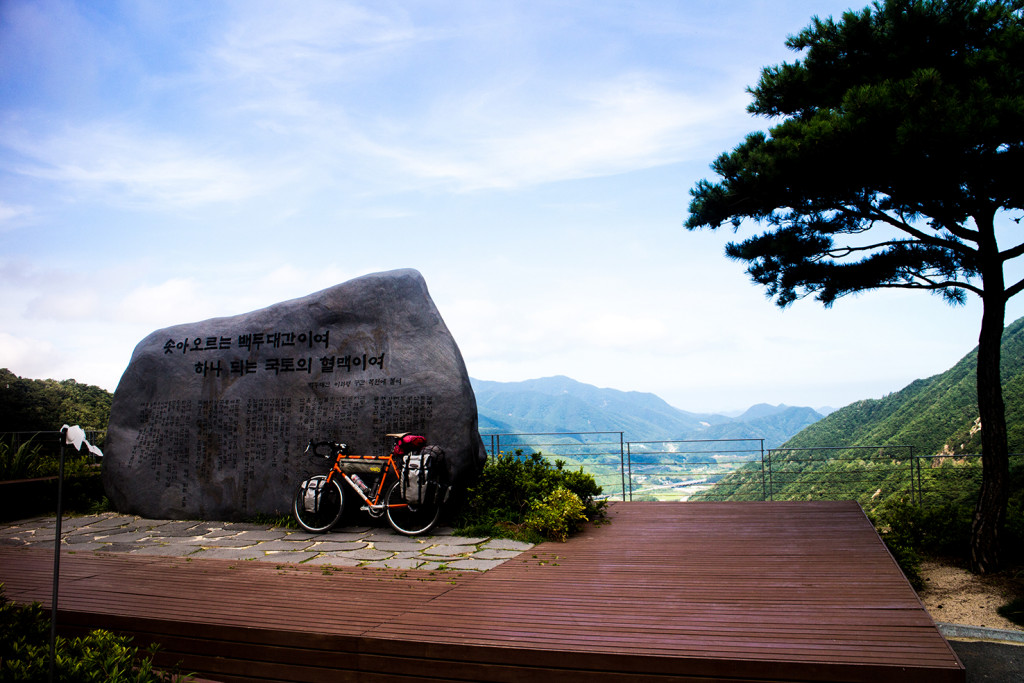 The highest point of the route. 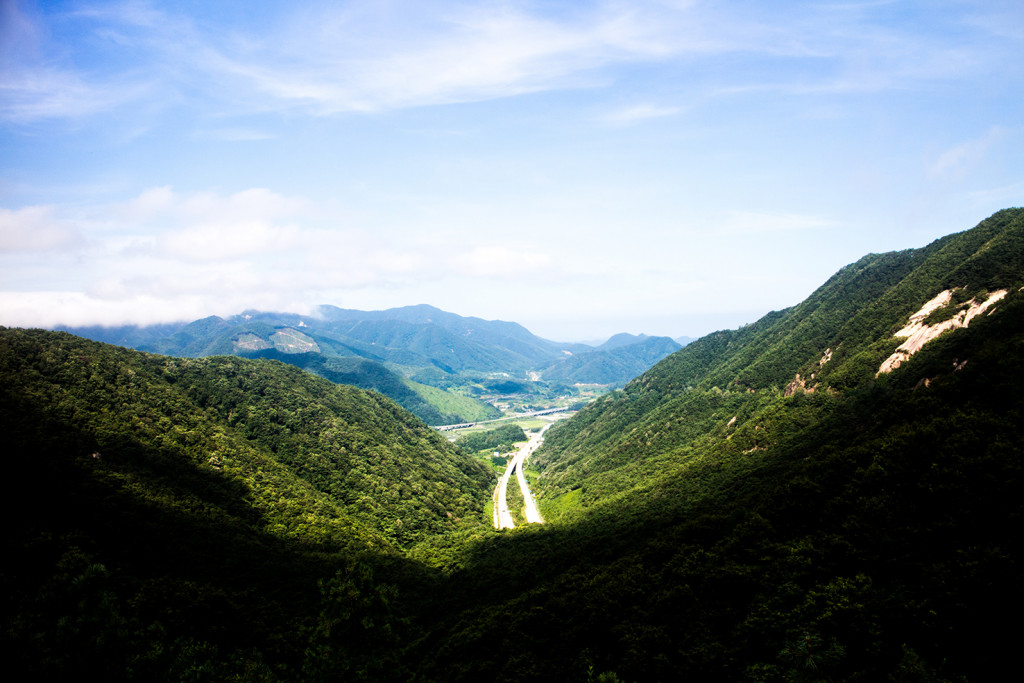 Anyhow, over the next couple of days there was some lovely riverside stretches, bits of mountain bike trails through forests and a decently sized mountain pass. I even rode with some lovely guys training for an iron man, namely Tam, whilst we chatted about Brexit (pronounced ‘Brek shit’) before he lost his bottle. His drinks bottle — he was quite capable of tackling a leisurely bike down the riverside, I think. 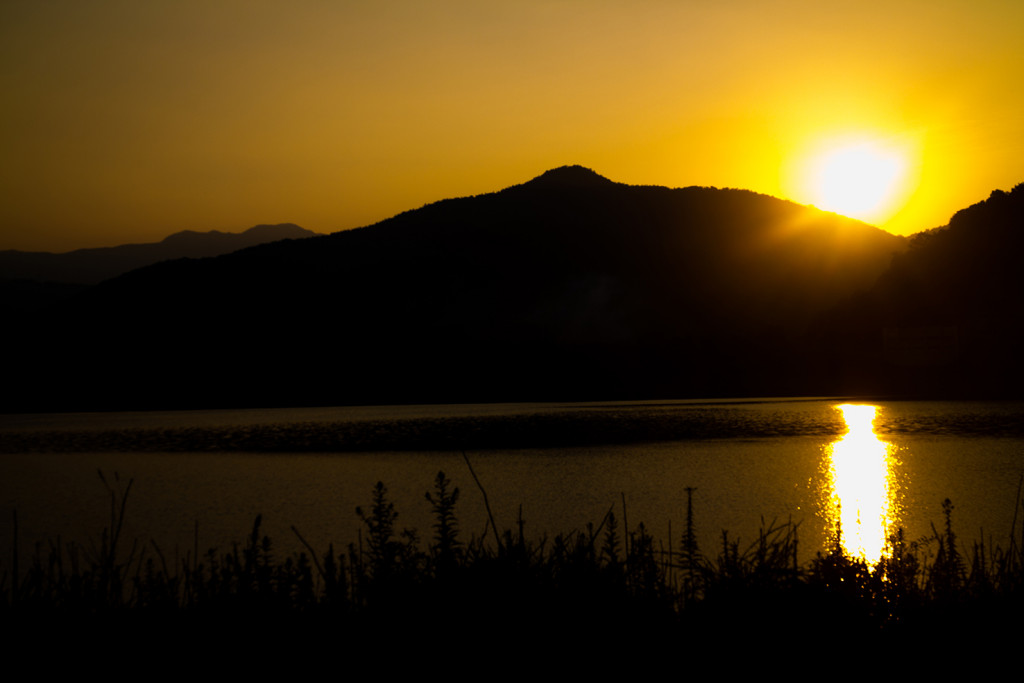 Looks nice, but the reality of being sat sweating in a tent wasn’t. 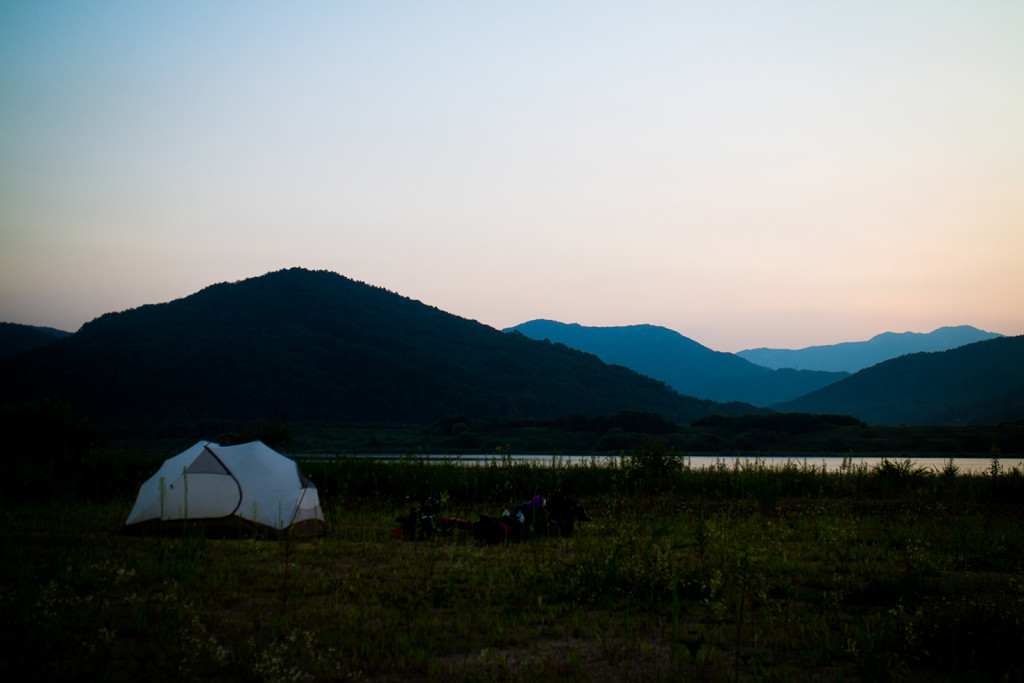 The night I nearly got run over whilst in my tent by some night fishermen.

About 100km from Busan it was time for me to detach myself from the security of the cycle path. It’s all well and good, but it kind of feels like the Koreans have gentrified cycle touring a bit, after a while you miss bring nearly clipped off your bike by a speeding tosser, or having to covertly take a roadside shit with merely two branches as a modesty screen. That’s what cycle touring’s all about. 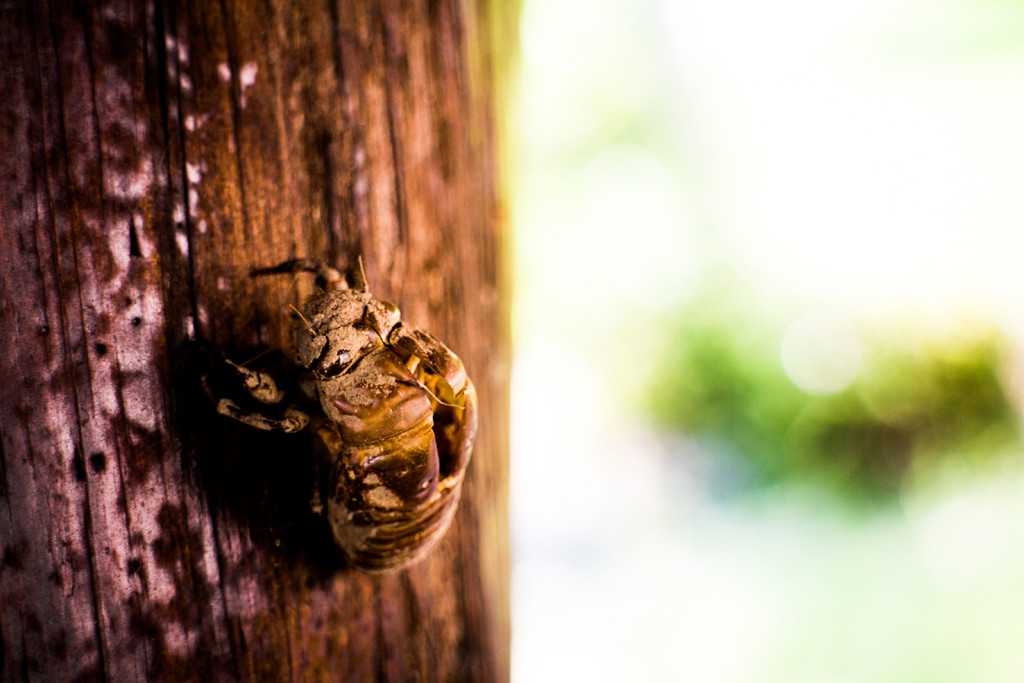 A Cicada husk. These are loud little bastards. 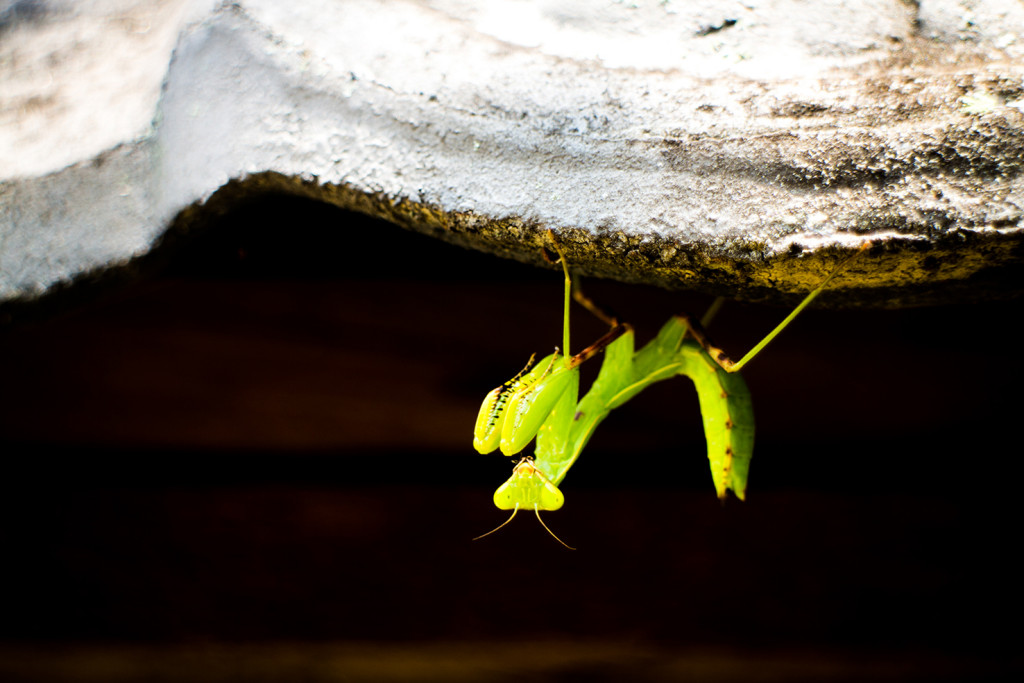 I had two days off piste to Yeosu, the first stop being in Jinjiu where I bagged a relatively cheap hotel in order to soothe my spiralling case of babooning of the arse, which left me a day to Yeosu.

When you’re cycling, some days just turn out to be shit. The worst of these are when it’s through nobody’s fault but your own. Can you remember the scene on The Truman Show in which Truman attempts to take an impromptu trip to Fiji, but is intercepted by a series of events that prevent from getting anywhere? Yeosu felt like my Fiji.

It didn’t help that it’s situated at the arse end of a peninsular, but there were three different bridges on the way that I thought I’d be able to cross. All inaccessible for cyclists. One was even clearly signposted yet ended up being half built, jutting out into nowhere. There were closed roads on the way, some for roadworks, some for no apparent reason. In the end I added 50km onto the day hauling the Buggernaut around the river before getting to Yeosu at 3am, eating a burger, drinking some soju and squeezing in a couple of hours quality shuteye on a park bench. Ahh, the good life.

That was pretty much me done for cycling on the Korean mainland. All aboard the ferry to Jeju, which took so long I genuinely think it was powered by the Chuckle Brothers wielding oars, and after arriving with two hours kip under my belt I was shaking like a shitting whippet, so the prospect of a week off the Buggernaut was a welcome one. 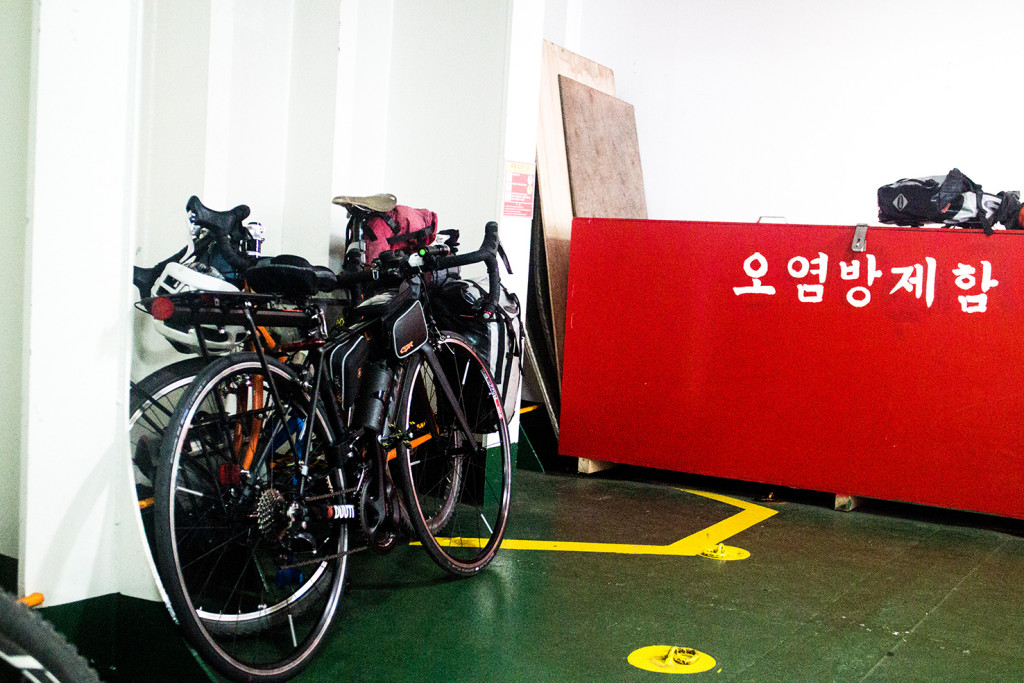 It’s always nice to meet old friends in different places and to see they’ve landed on their feet (even if they don’t quite realise just how good it is at the time). A week spent at Cal and Bex’s little tropical hideaway was proper grand. We wandered through rainforests, pondered down beaches, climbed aboard a pirate ship and went on a submarine. We laughed, we cried, we hurled (well we managed two of the three, I’ll leave it up to you to decide which). We swapped red wine and fishcakes for soju and kimbap, ate squid jerky that tasted of Pets at Home, and dreamt of Toby Carverys. That bit was really emotional. Proper tearjerker. 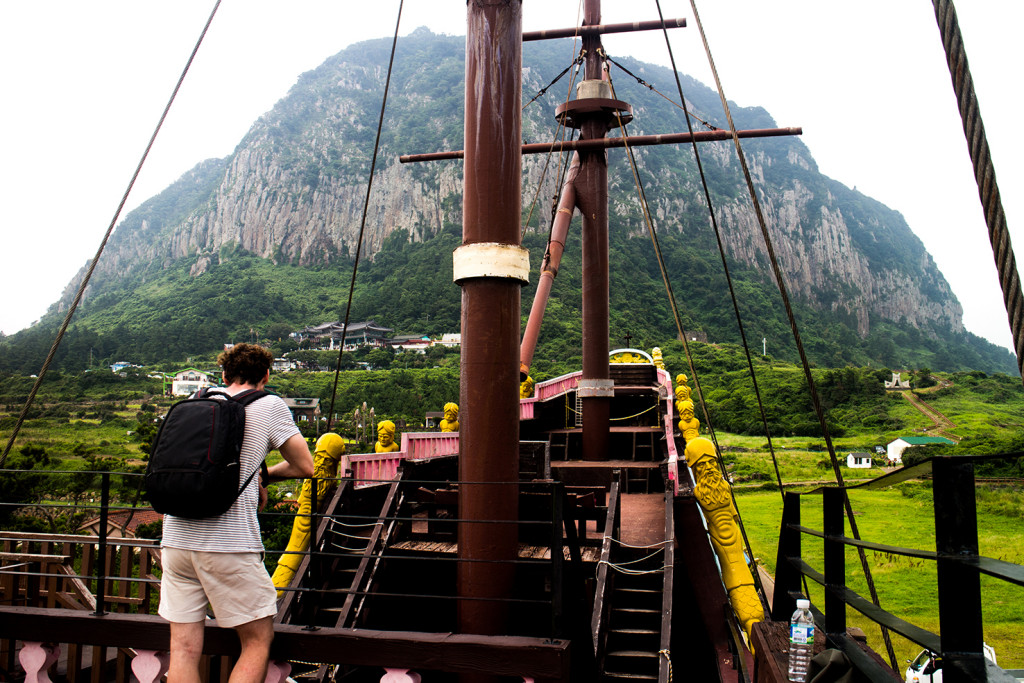 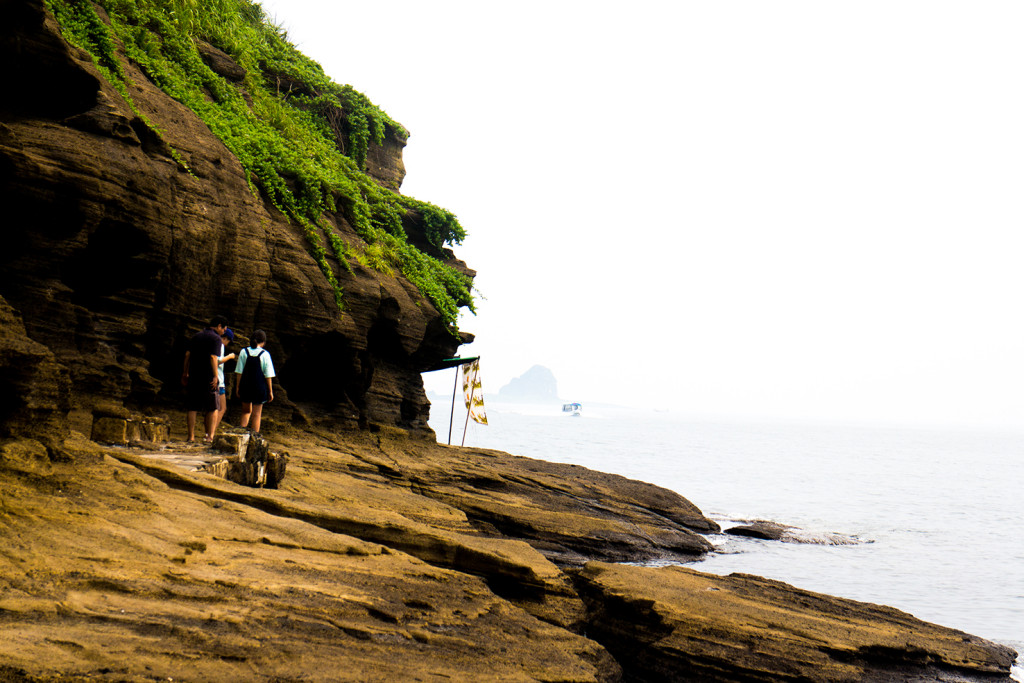 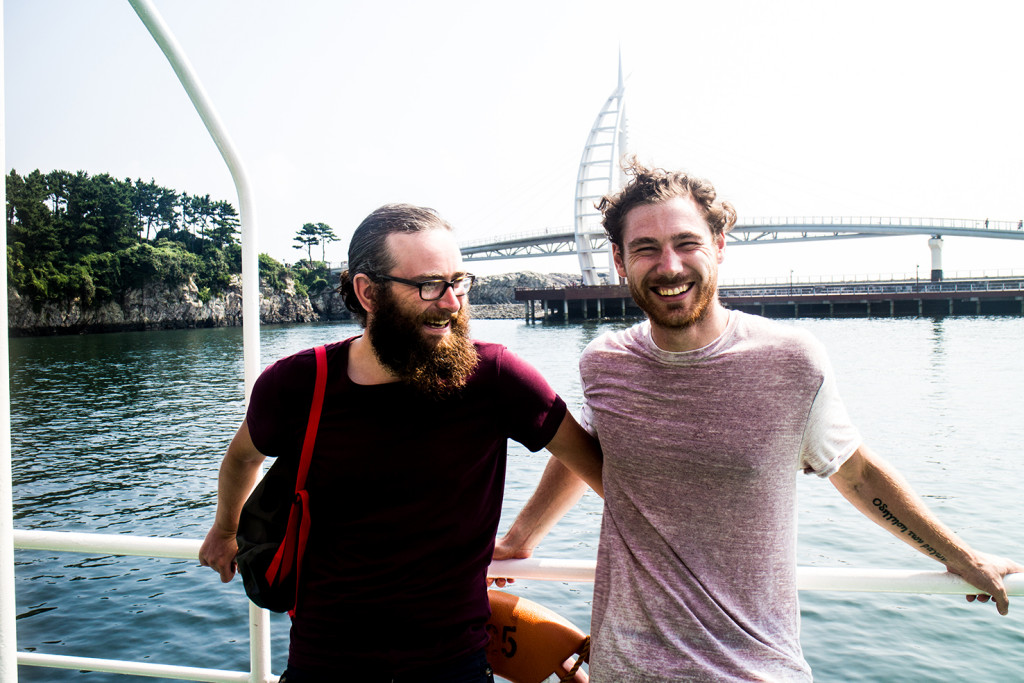 Sam and Callum; being great. 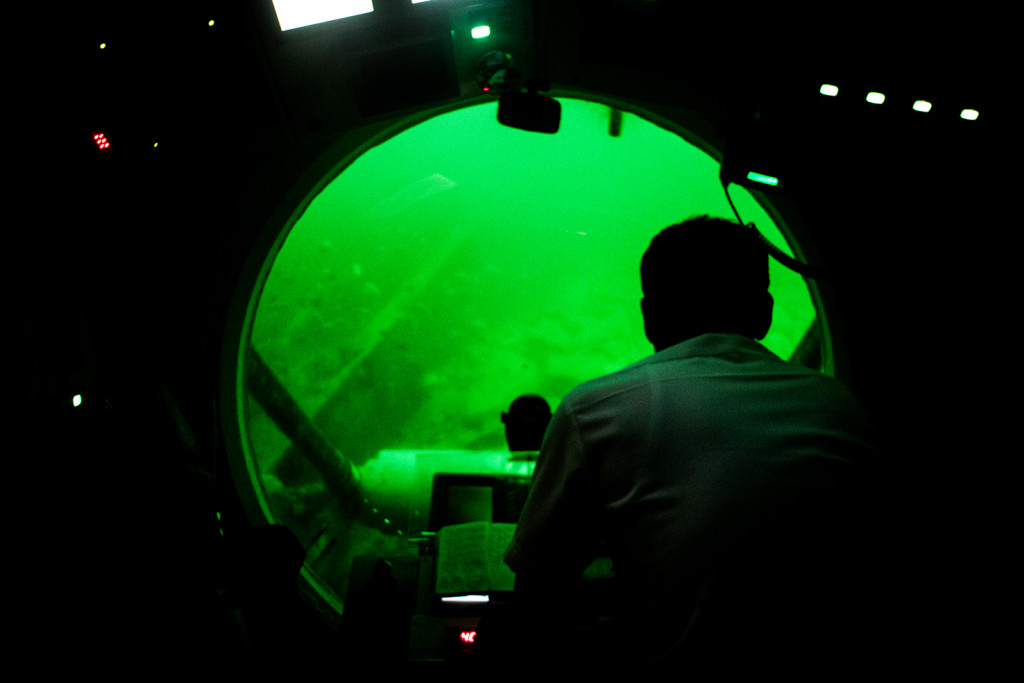 A week slipped past all too quickly, it was time for me to head back to the mainland, and fortunately there was a ferry direct to Busan, a solid 12 hours, enough time to kick back, relax, and get plenty of kip before heading over to Japan fresh as a daisy. Unfortunately, I’m easily lead and ended up meeting some Korean guys and drank soju and beer until the early hours. I think I got a couple of hours sleep in before I got kicked out of my lodgings. 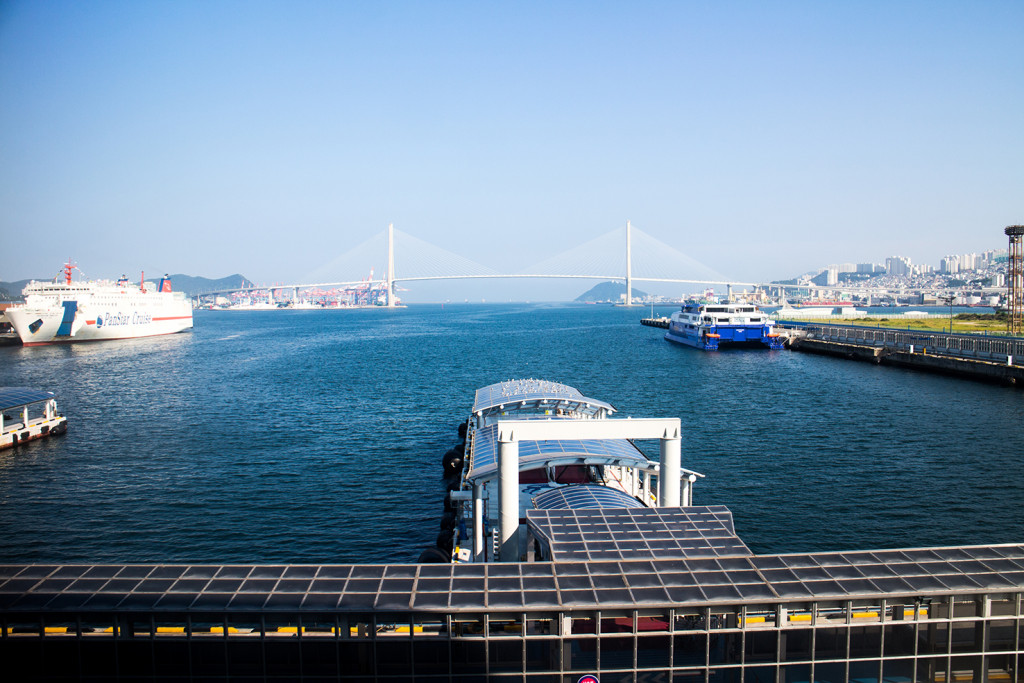 As such, my time in Busan was limited to moping around hungover, sweating, looking like sasquatch. Business as usual.

I had ten hours to kill at the port before my ferry to Japan. Plenty of time to sit and watch the ships comin’ in, and goin’ out again. 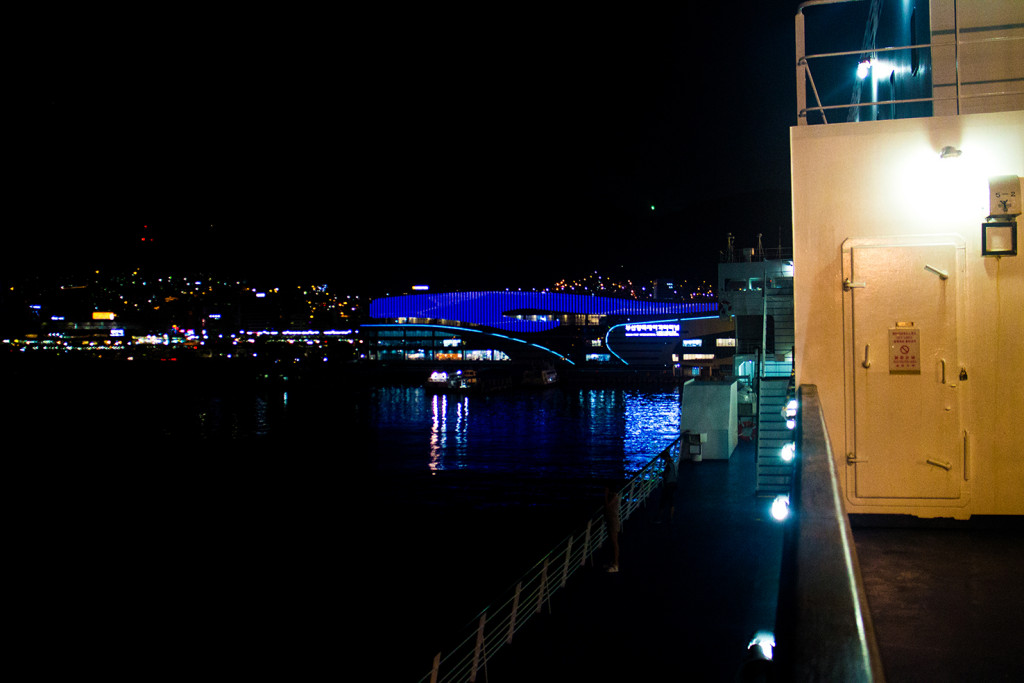 It wouldn’t be Asia without some neon lights.