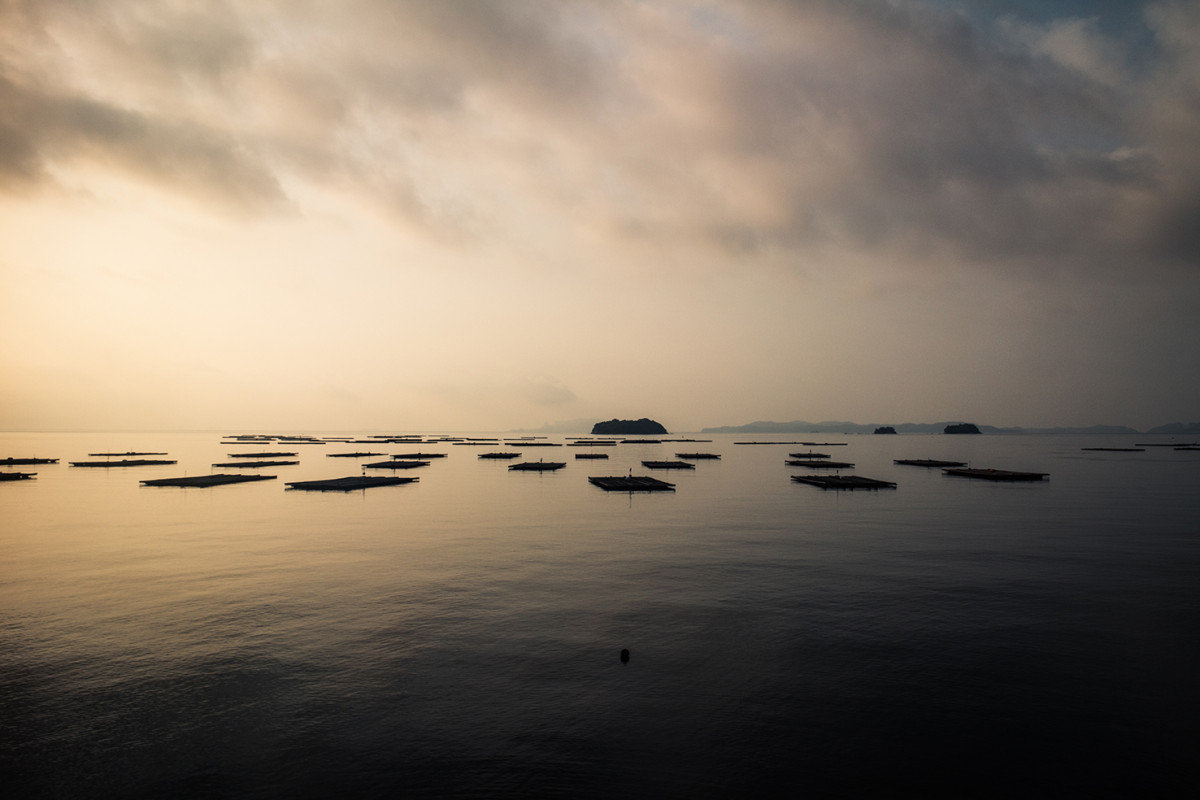 There was no soju aboard the ferry to Japan; a blessing in disguise.

I’d been expecting Japan to be a fairly hectic place, obviously Fukuoka didn’t get the message. For a fairly large city there wasn’t much hustle and bustle, and it was a fairly nice place to wander around. 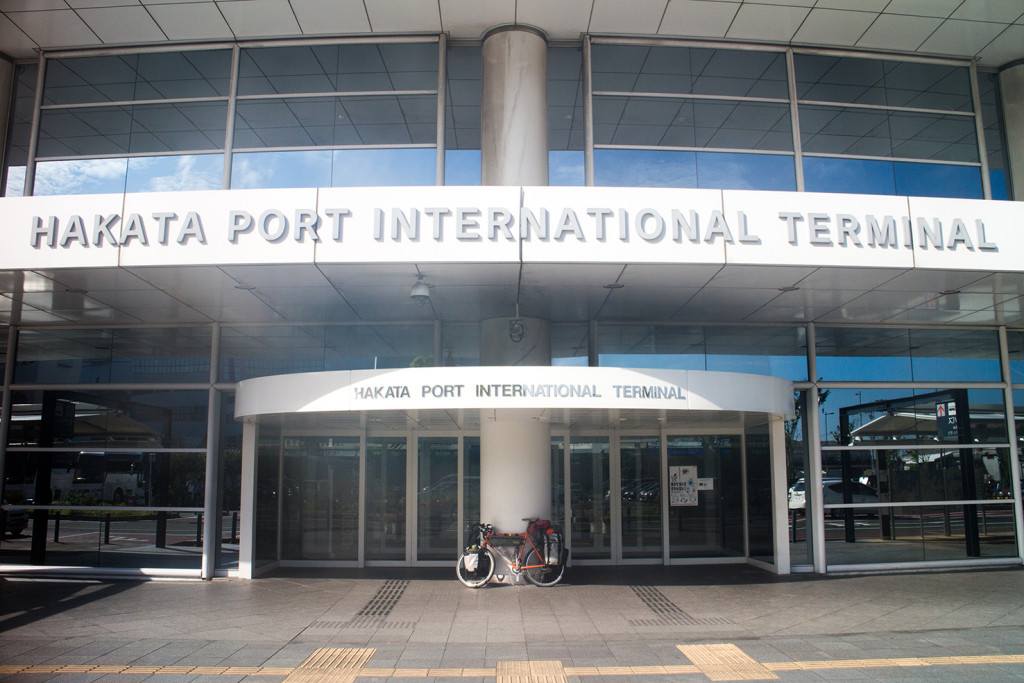 Fresh off the boat.

The plan for Japan — I had a flight booked back to Melbourne from Tokyo which gave me around 25 days riding time. Dress me in a yellow jumpsuit and call me Anneka. Go on.

I’ll be honest, the first day of riding in Japan was shit. Continuous, grey, urban sprawl all the way. Added to the fact it was sweat-pissingly hot; when I got to Kitakyushu I looked up to see a massive sign saying ’42°’. The lure of air-con was too great and prospect of sitting in a tent, let alone finding a decent spot, seemed so shit it took me seconds to decide.

Getting off the South Island was a bit tricky, and my normal approach of heading towards the most obvious route didn’t work. I had to double back on myself and ask a tiny old road worker who somehow knew a bit of English, well enough to tell me there was a tunnel for pedestrians and cyclists, whilst pointing me on my way. 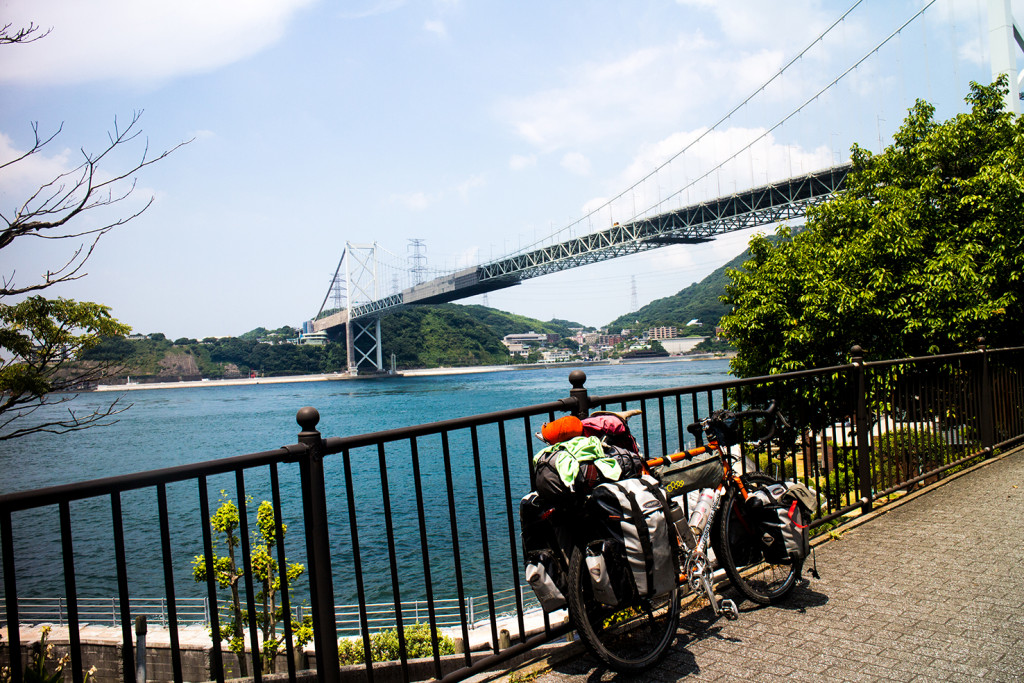 I wanted to get over there. 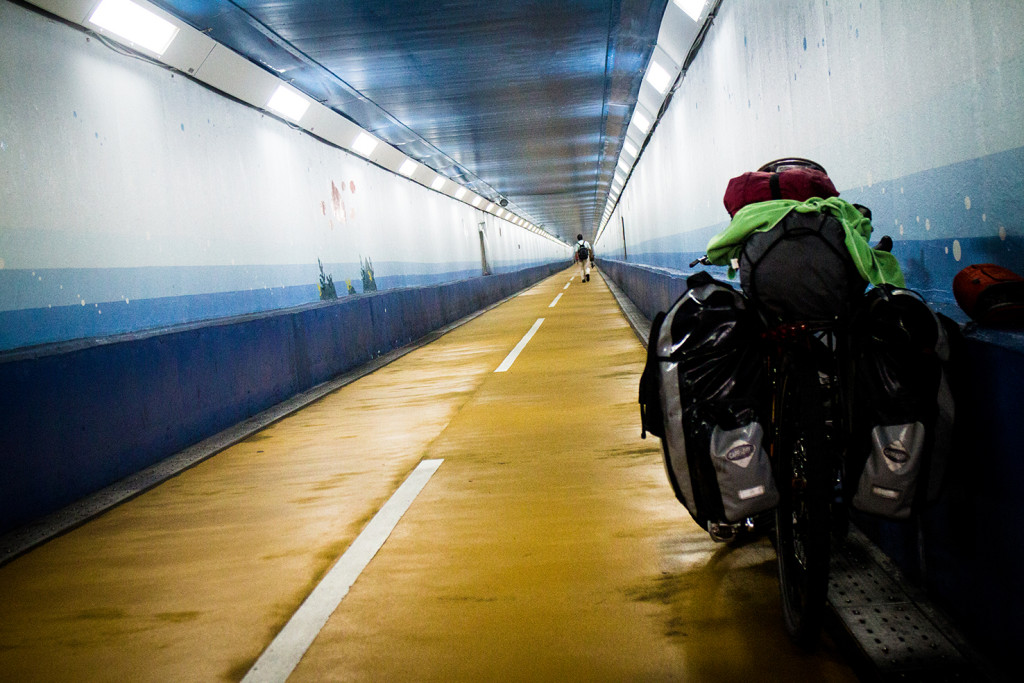 But I had to find the secret tunnel first.

I finally managed to find a bit of countryside on the main island, after skirting around some cliffs by the sea. I also started to figure out that nobody gives a shit where you camp in Japan, as long as you’re not a dick and leave rubbish everywhere. I camped next to a lake and a pagoda and had one of the shittest nights sleep, if you could even call it that.

The main problem was that I managed to get sleep paralysis after trying for hours to kip. The weird thing was, I kept dreaming someone was lifting one end of my tent up, and no matter how hard I tried to get up to tell them to piss off, I couldn’t move. This went on for what felt like an hour. 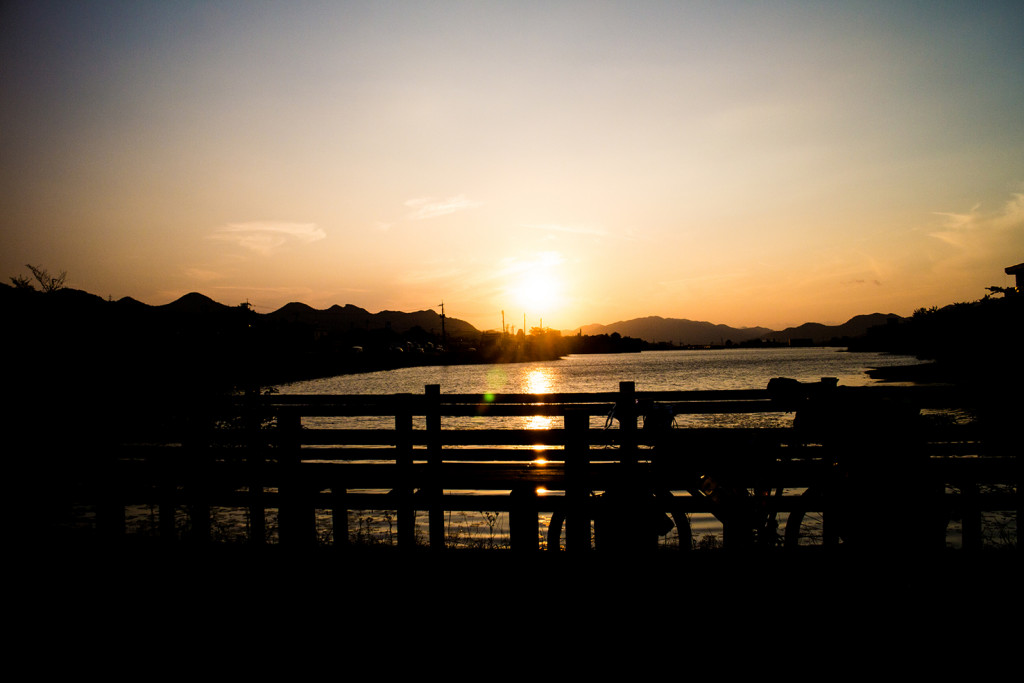 Feeling nice and refreshed I decided to give it a long punt to Hiroshima. Japan decided to show off a bit of it’s sexy countryside on the way, pulling apart it’s trenchcoat to reveal some cracking forest and crystal clear rivers. They were so clear I sat on the side of a bridge and watched a bunch of turtles float downstream. 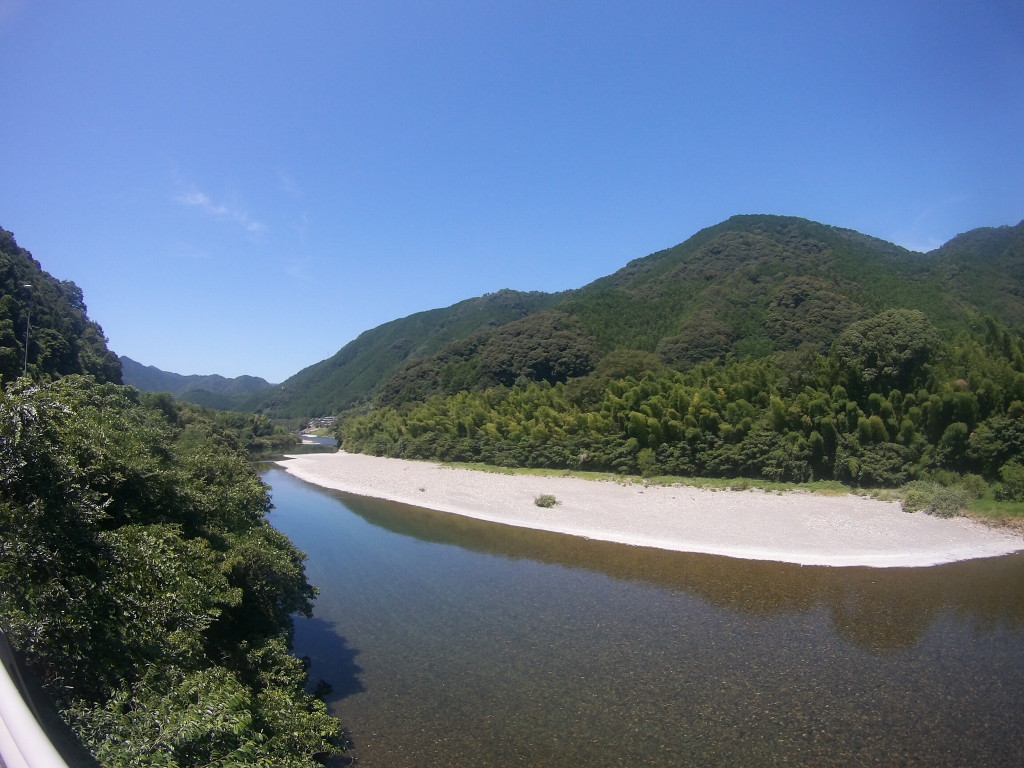 Prime for a dip. 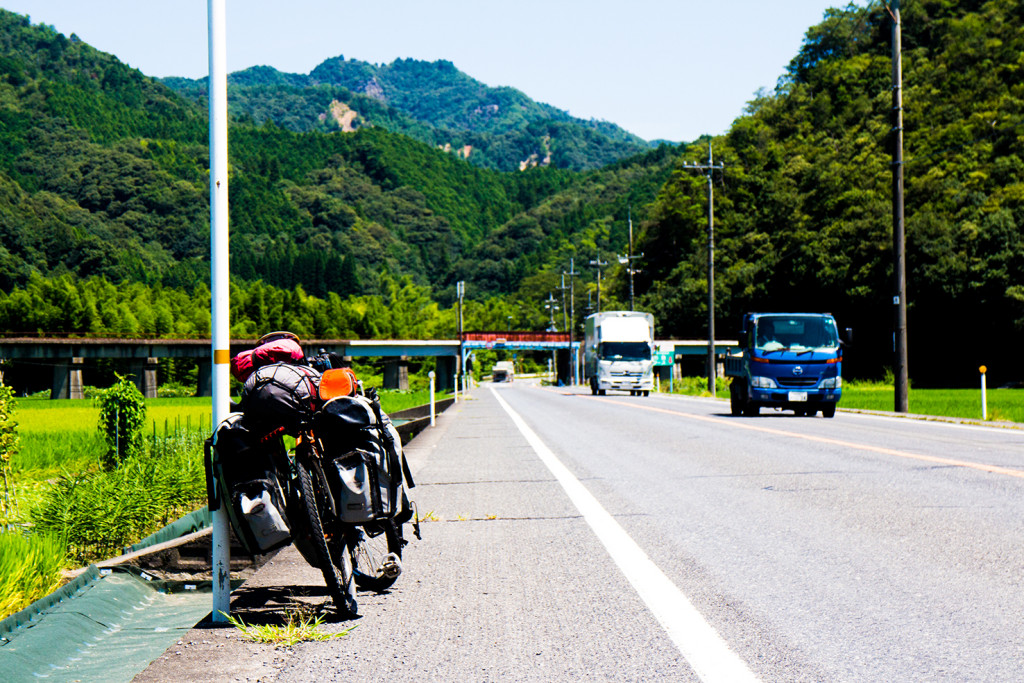 Hiroshima was another grey sprawling long haul on the way in, and the city wasn’t all that great either; it was like a bomb’s hit it. 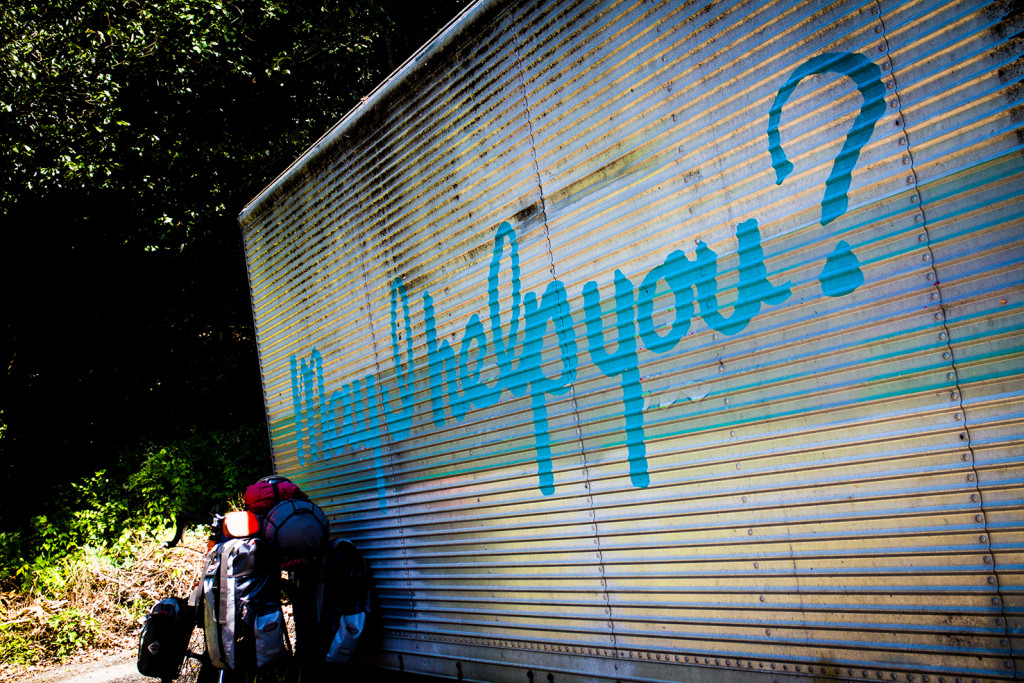 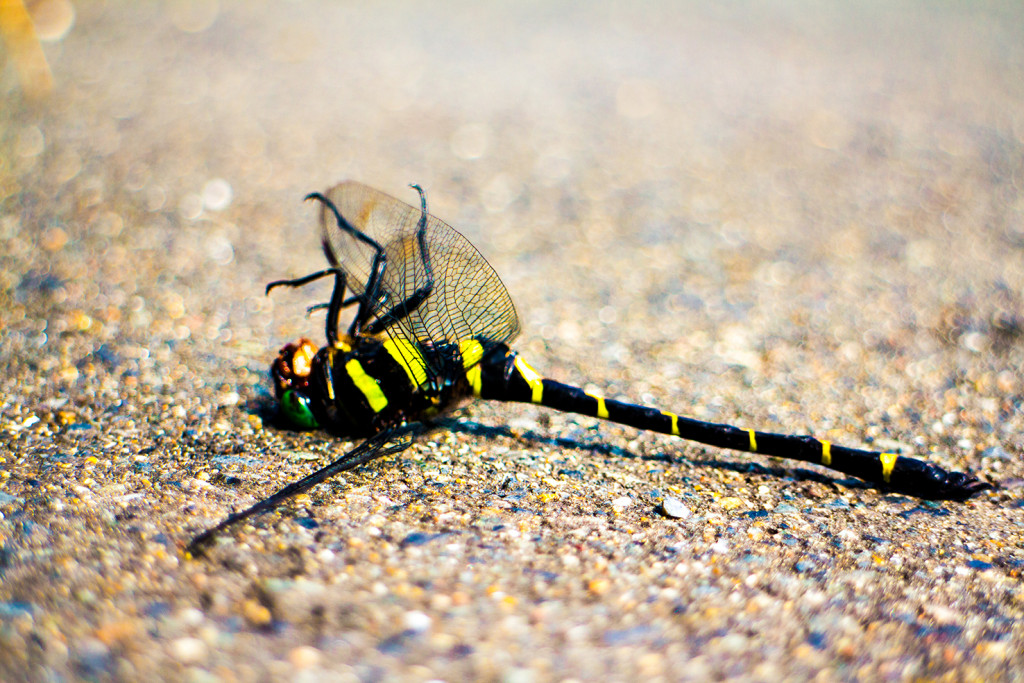 Crash landing. I gave him a bit of sugary drink to sort him out.

Jokes aside, I tried to stay a couple of days in Hiroshima because it’s one of the few cities I’ve been through with major historical influence. Unfortunately, Hiroshima’s just not really set up all that well for tourists; there didn’t seem to be much accommodation, even less actually available, and in typical Japanese style it cost an arm and a leg for something that you could just about fit an arm and a leg in. In the end I had to settle for a traditional Ryoken, which is a tiny room with a wicker floor and a roll-out bed that costs just as much as a hotel (but that’s ok because they’re really Japanese apparently).

I was a bit disappointed with the Hiroshima monument; one of the iconic moments of modern history, what should be a recognised as beacon of peace by the world, represented by a plaque, a pond and a torch. Maybe I’m missing the point. 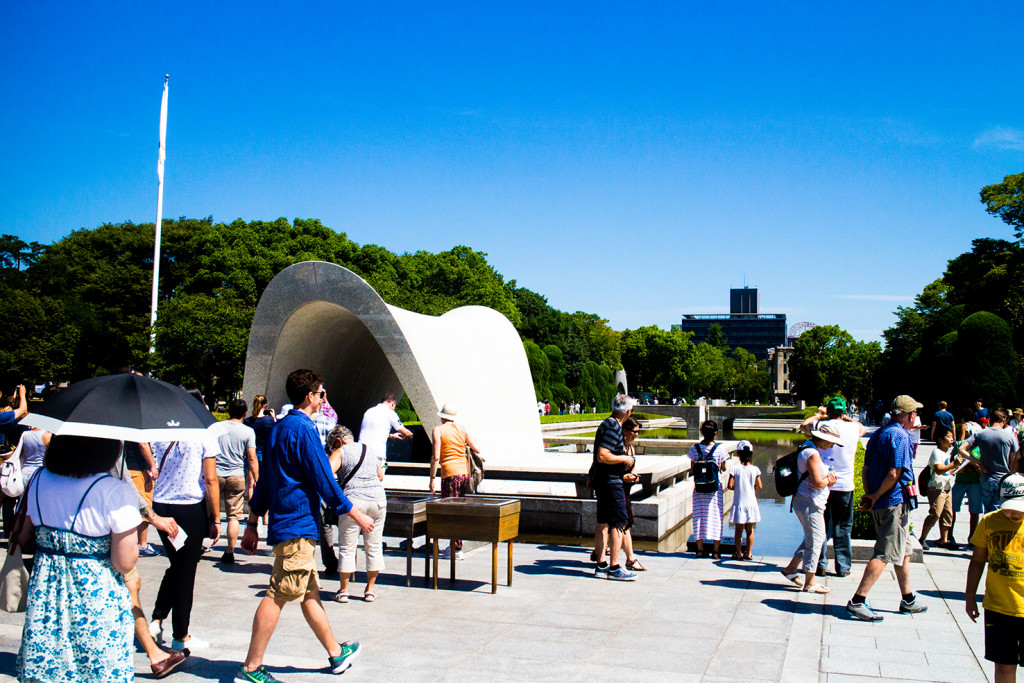 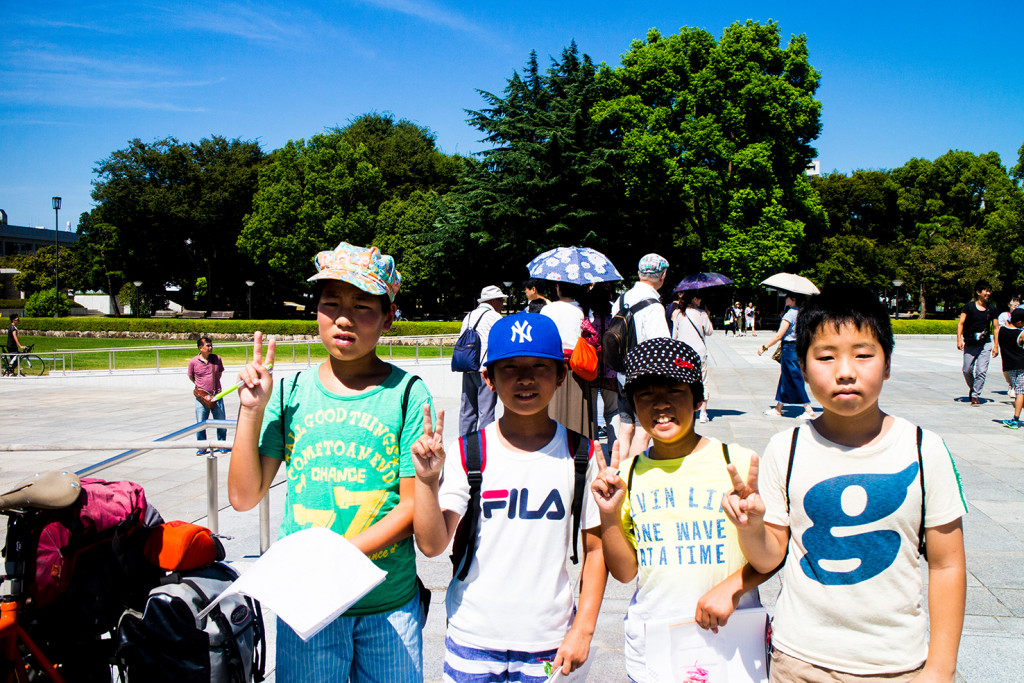 These lads wanted a little interview to practise their English.

They gave me this… thing for my time.

The museum is meant to be amazing, and from what it saw as I pinned my mug against the glass like a kid peering into a toy shop, it looked up to scratch, but one of the problems of cycle touring is that you’re lugging round your worldly possessions on a bike, and leaving it unattended is a stressful experience. Maybe I’m too paranoid; do thieves operate in peace memorials?

I bumped into some proper cycle tourers the next day, just after the sweaty climb out of Hiroshima. This was Tomas and Luka, they’d both been on the road for a while and were fellow graduates of the Silk Road Class of 2015. We chatted bike for a while, then future plans. Tomas was heading to Taiwan to live for a while, whilst Luka was going to try to get a boat to South America as a work-aboard thing. Ambitious.

The thing that tickled me the most about Luka, was how he’d adapted to the heat. He’d refined his cycling gear to his underwear, a unbuttoned shirt, and a straw hat that flung backwards whenever a gust of wind picked up, which from behind looked like he was laughing maniacally.

It was a quick ride together, just a few hours, they had another 40km to cover whereas I wasn’t in that much of a rush, so I set about finding a camp spot, and scored big time with a private beach. 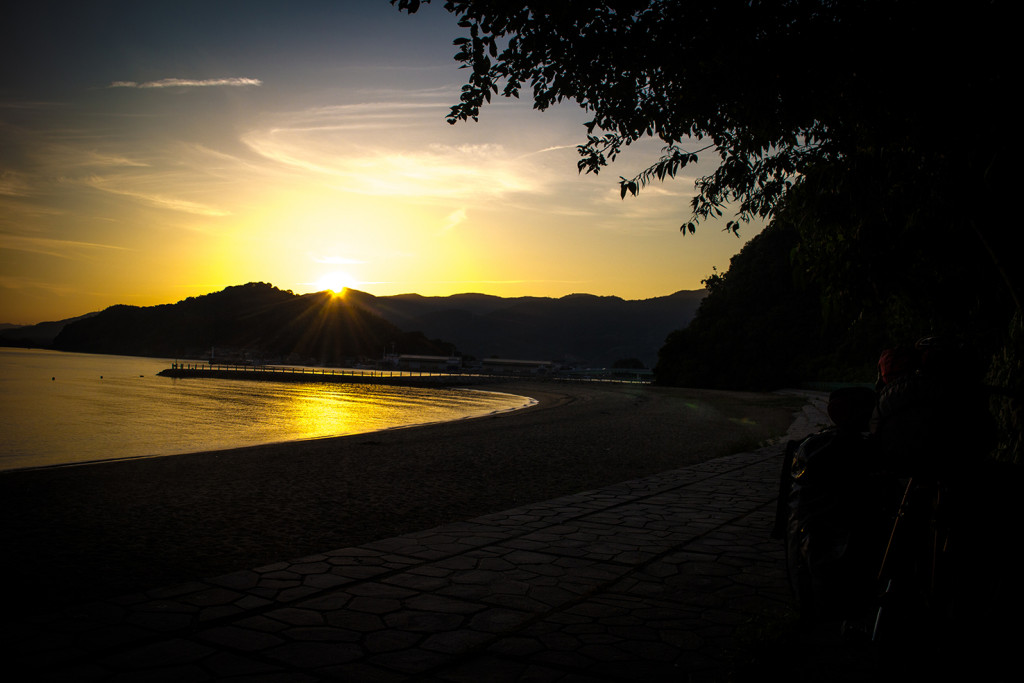 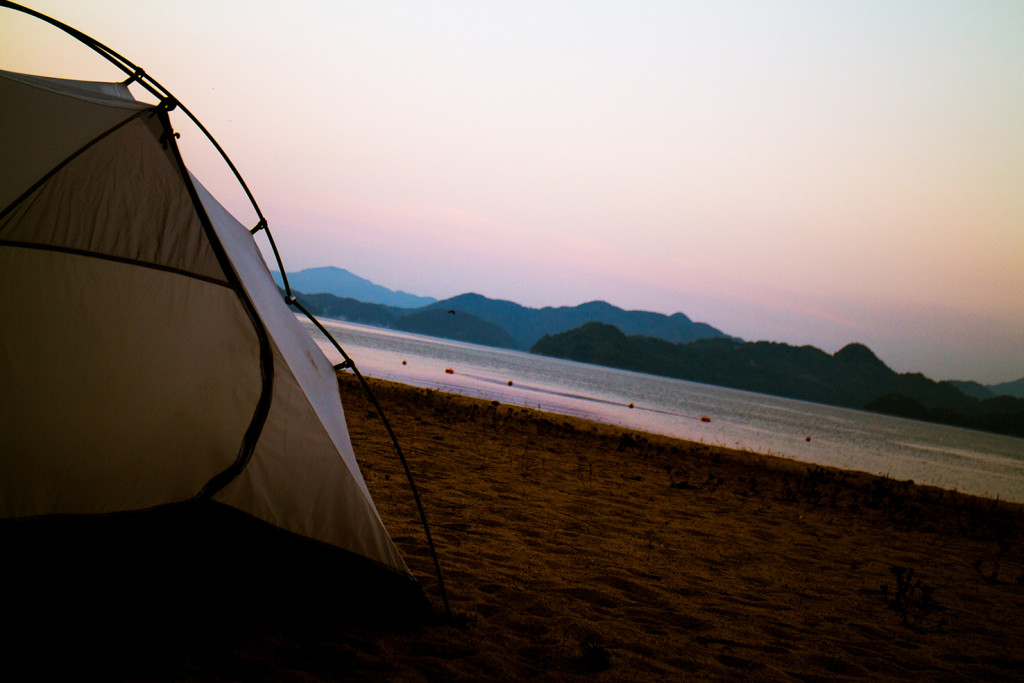 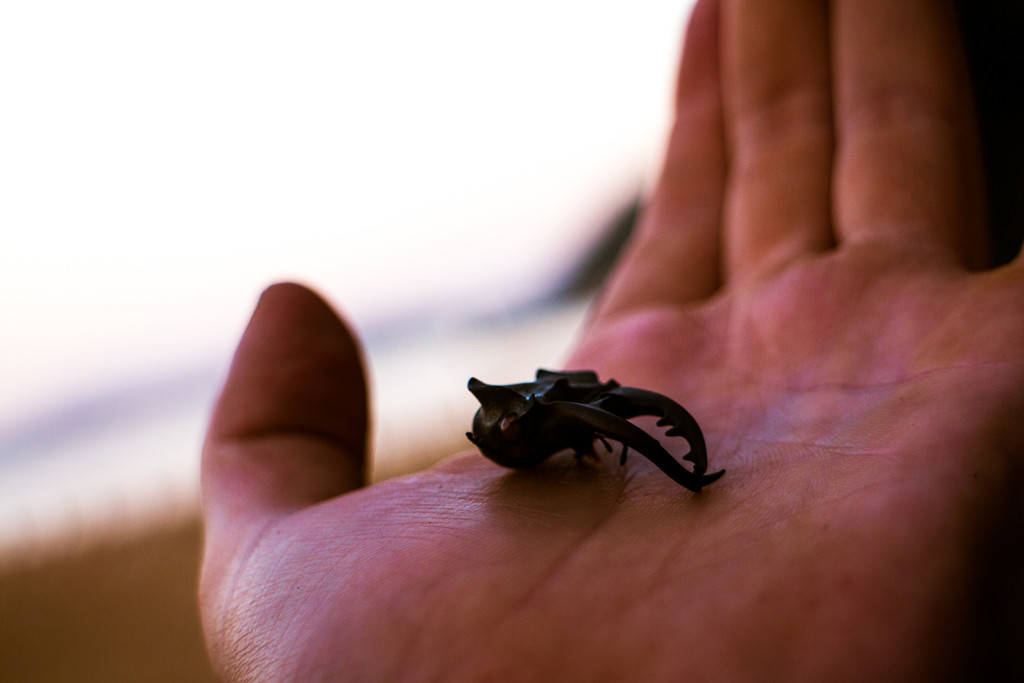 Insects were getting bigger 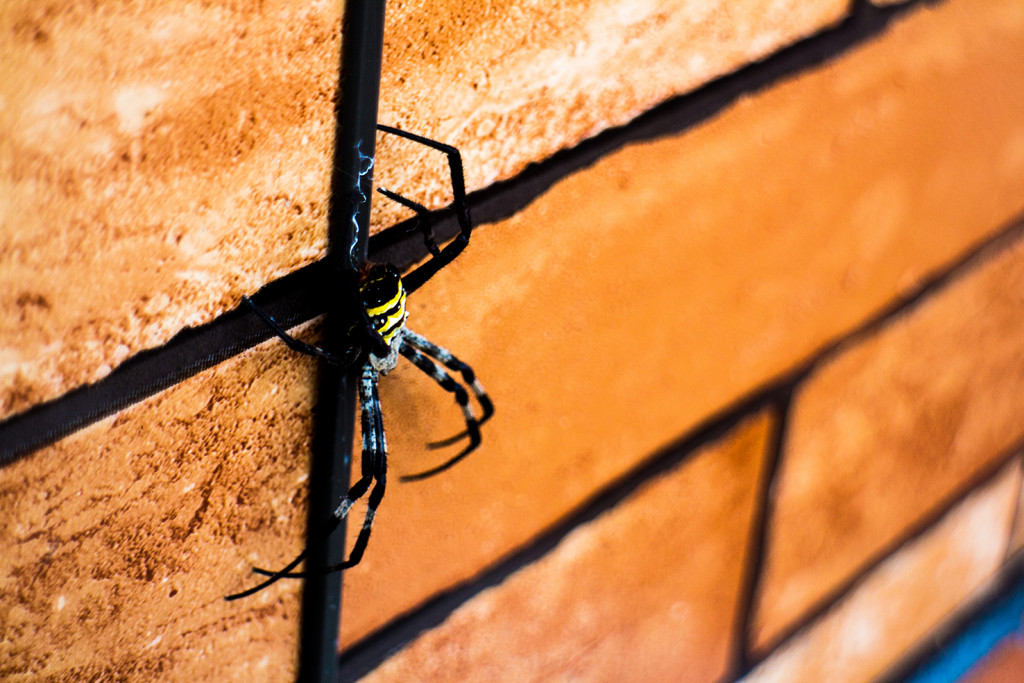 This fella in particular.

Just a note for any cycle tourers reading, I found an awesome map online with cool places to camp for free – A nice Google map of lots of free camping spots

Things you have to do in Japan – stay in a capsule hotel. I decided not to tell them I was on a bike with a daft amount of luggage, and I wasn’t going to leave it outside. The bloke seemed a bit annoyed and kept asking ‘make smaller?’, but unfortunately, The Buggernaut doesn’t fold up like a Brompton, and it goes where it wants, entirely unannounced.

This capsule hotel then. I didn’t realise it was a sauna, and at first all I actually wanted was a cold beer, so went off looking for a bar, but as it was six o’clock I had to settle for a beer outside a convenience store. This is where I met Andy, an American bloke who lived in Okayama with his Japanese wife. We probably had too many high-power 9% lemonades that are strangely the cheapest booze by a long shot in Japan. Anyway, I pondered back to the capsule hotel, stripped down, went for a communal sit down shower (as you do), got up, went to ponder through to the sauna and…

I didn’t quite hit the window hard enough to send me on my arse, but it was a bold, stark bollock naked stride I had going on, and let’s be honest, being the only white bloke in there I probably had enough eyes on me without drawing attention to myself.

The next couple of days were pretty normal, sweat-your-bollocks-off cycling days. There was a moment where I was rolling through a small fishing town and they started playing the Hovis theme tune on all of the loudspeakers. Nobody blinked an eyelid at this, so I’m assuming this was a daily occurance for them, but for me it left me giggling for hours. 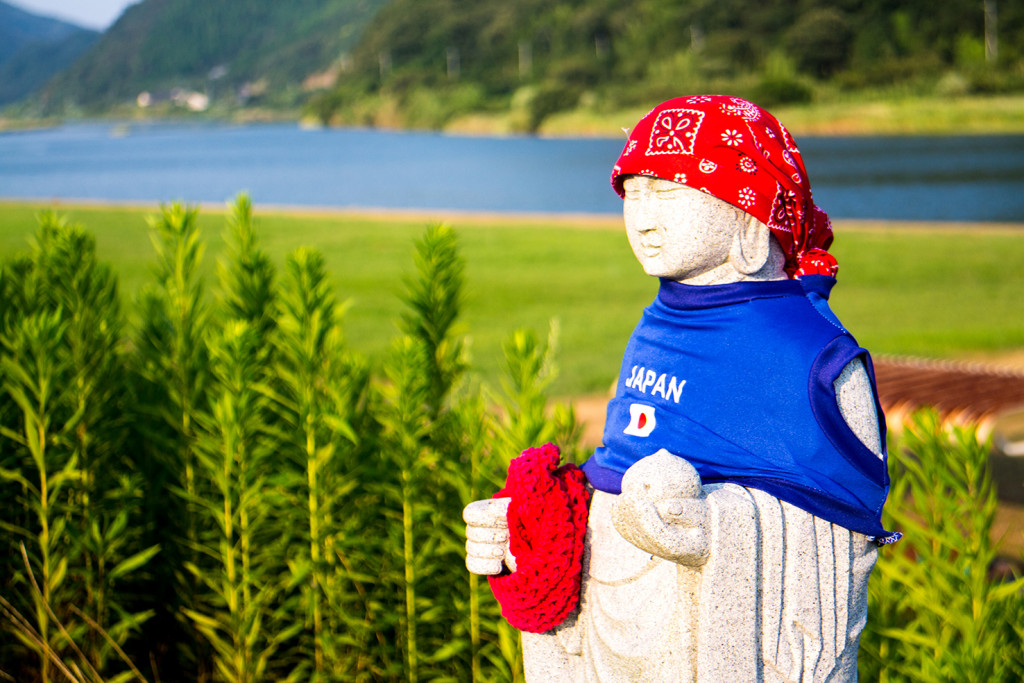 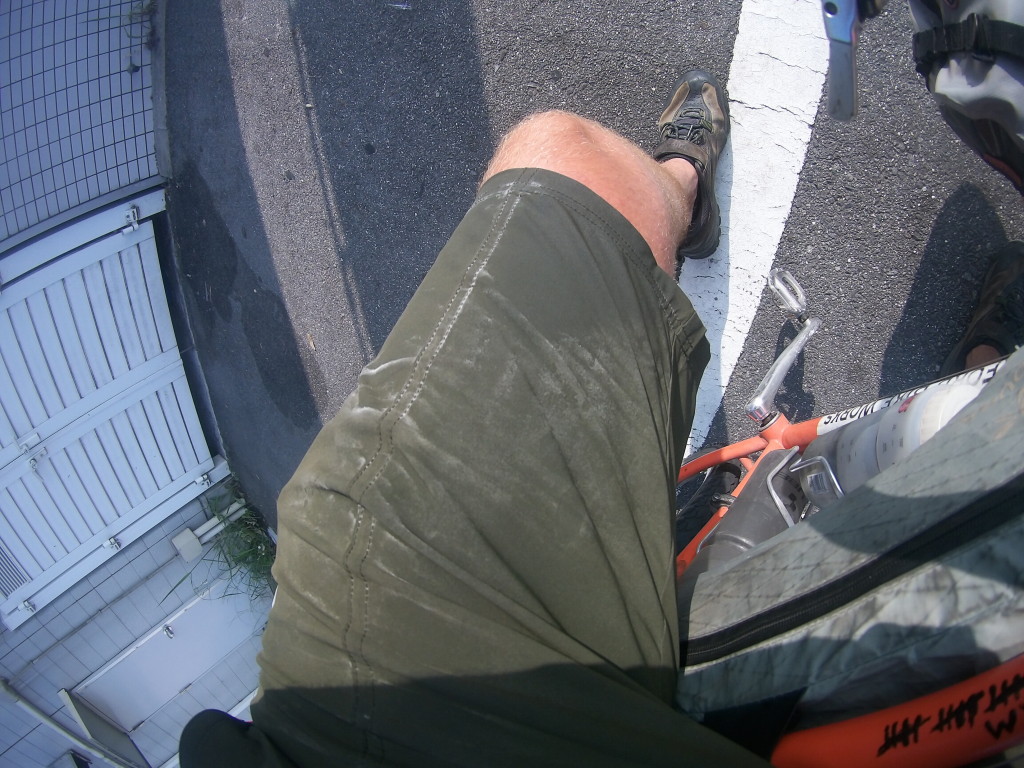 I went through Akashi. I really can’t recommend that. An absolute shite of a grey city that lines the inner sea, but it does have one thing; the largest cantilever suspension bridge in the world, which was pretty spectacular. Shortly afterwards I got overtaken by two guys and a girl on go-karts dressed respectively as Mario, Luigi and Peach. I guess that makes me last. I suppose given my current unshaven state I’m probably Donkey Kong, I’d best get the banana skins out. 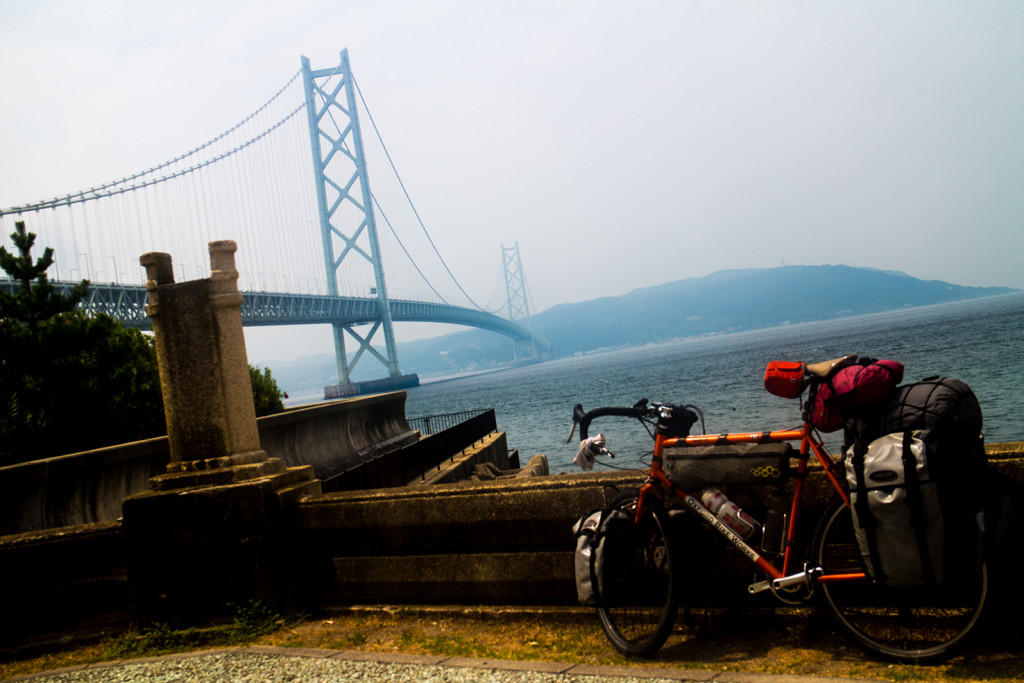 It might be bigger, but it’s still no Humber.

I popped into Osaka for a night before an overland stretch. I think I did Osaka all wrong, the area I was in was a complete shitheap with broken down, destitute people seemingly wandering around doing the best part of knack all. The centre seemed ok, but nothing special, just the usual tall, shiny buildings, maybe I’m missing something. 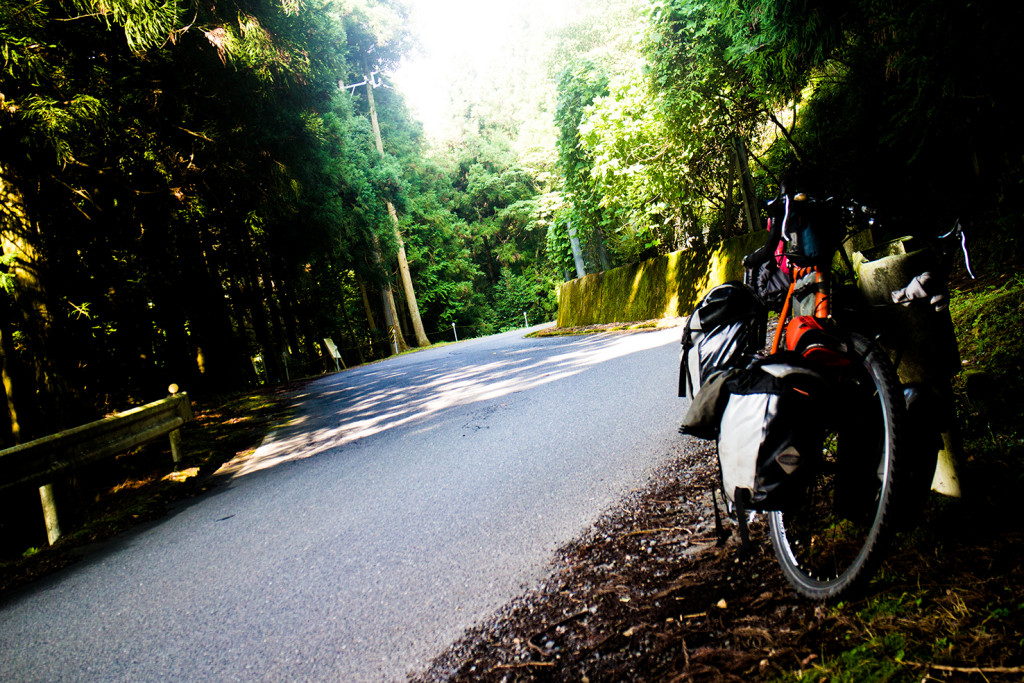 One of the best things about cycle touring Japan is the fact there’s plenty of parks that, as long as you’re not a dick, you can pitch a tent in. Either that or they’re too bloody nice to tell the westerner to piss off. In Iga I feel I might have been pushing it. I managed to find a huge forest park, with lovely gravel trails winding round gardens and woodland. Obviously I found the nicest one and stuck my arse right under a nice pagoda. A wise choice too as it pissed it down during the night. 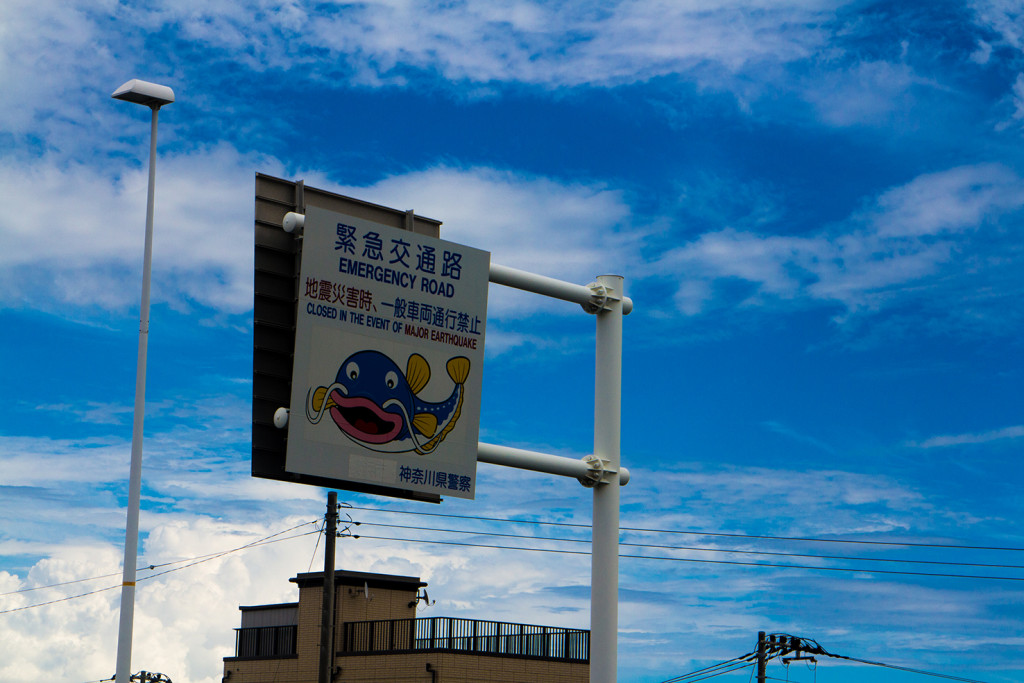 My run of luck camping in parks didn’t last forever, and after Nagoya I earmarked a park on a little island that I thought would be a shoe-in. Firstly I was rumbled in one potential spot by a hobo. Then I was rumbled in another when loads of people on their phones started wandering past, then I realised I was planning on camping in a Pokemon gym. The last spot was under a bridge as there was a thunderstorm looming. That was the least of my worries though as a pikey Japanese family decided to turn up as start setting fireworks off about five metres from my tent. I kept my cool until some smoking ball rolled near my tent, which I then picked up, strolled over and gave them a bollocking they probably didn’t understand. I think that my opening gambit was –

‘What the fuck do you think you’re playing at?’

I got ‘Sorry’ and lots of head bowing in return so I reckon they kind of understood. I think I spoiled their party a bit though. 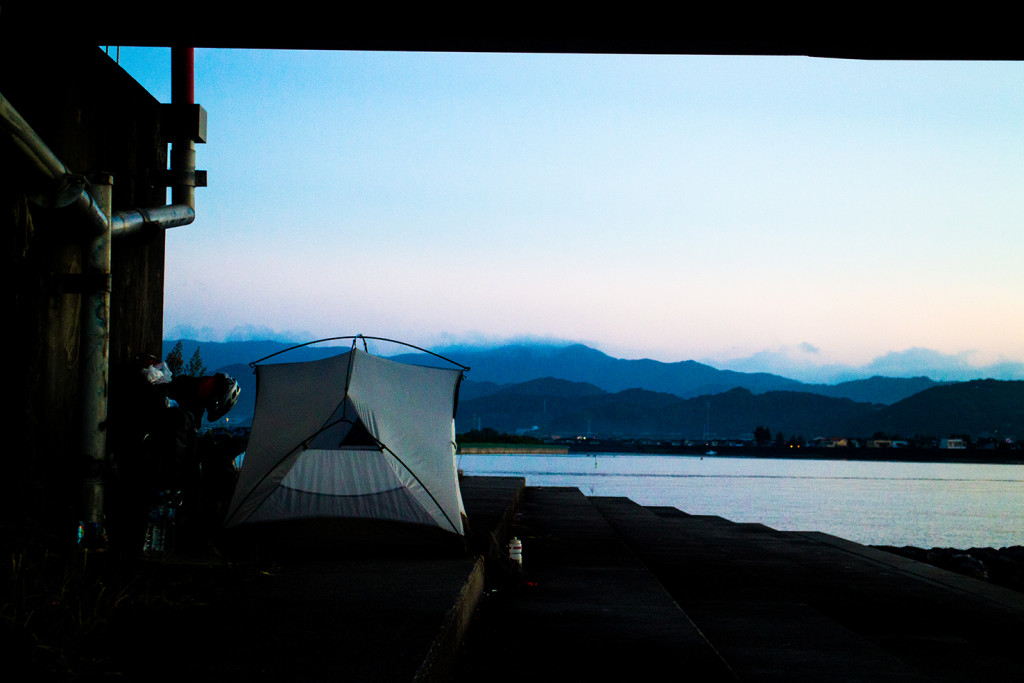 The angry troll under the bridge. 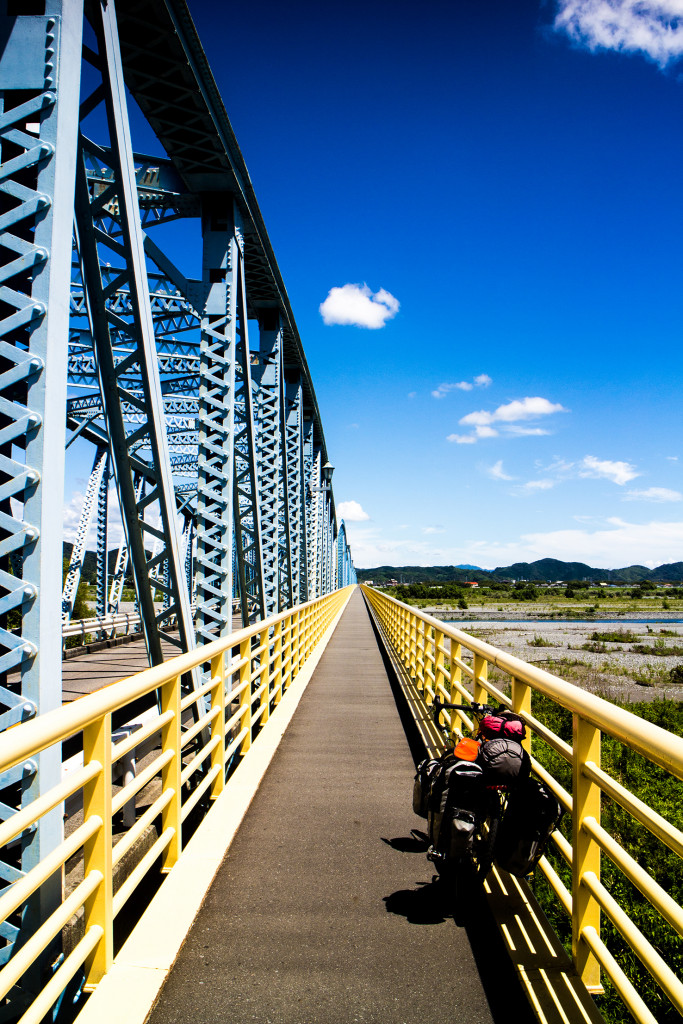 From here on it was pretty much just following the coast until Tokyo. I went past Mount Fuji at one point, in one of the shittest, rainiest days of my life. It was so cloudy I didn’t even get to see the peak. 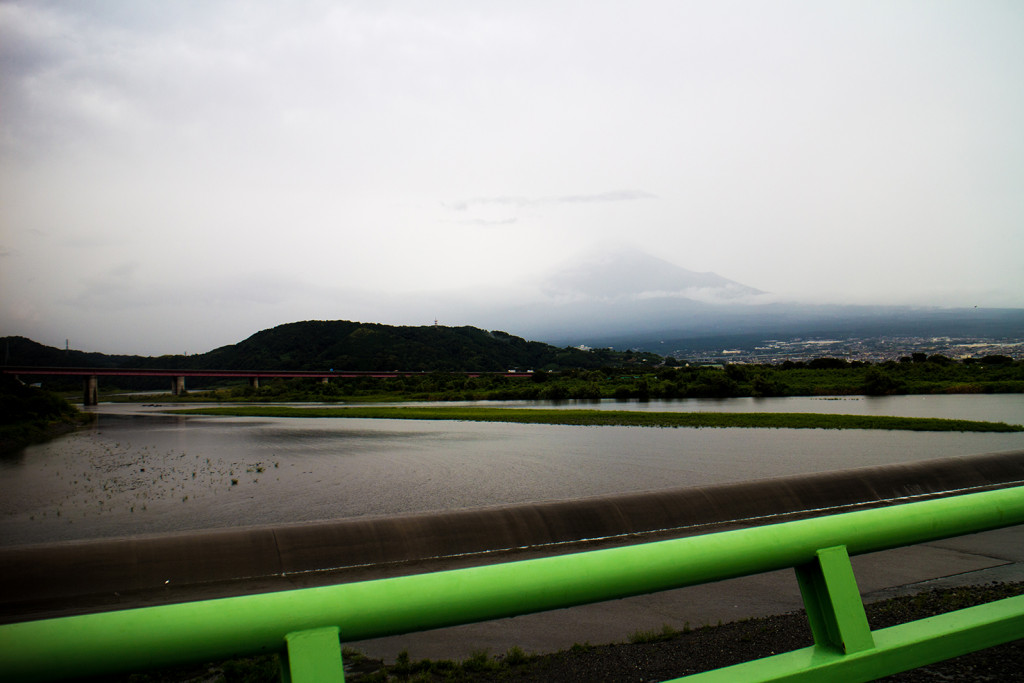 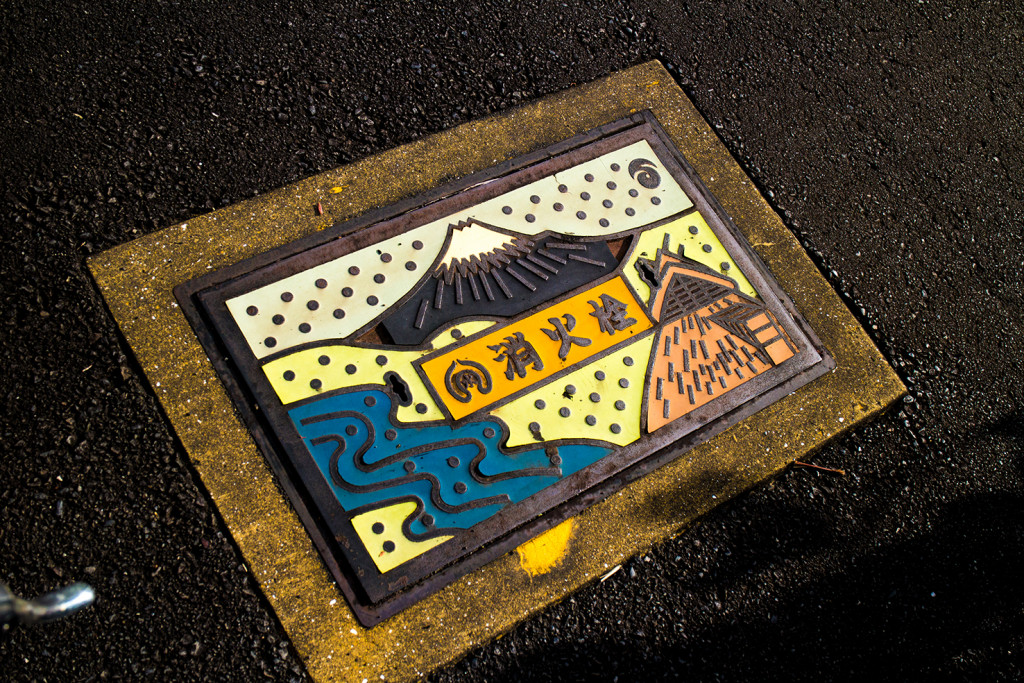 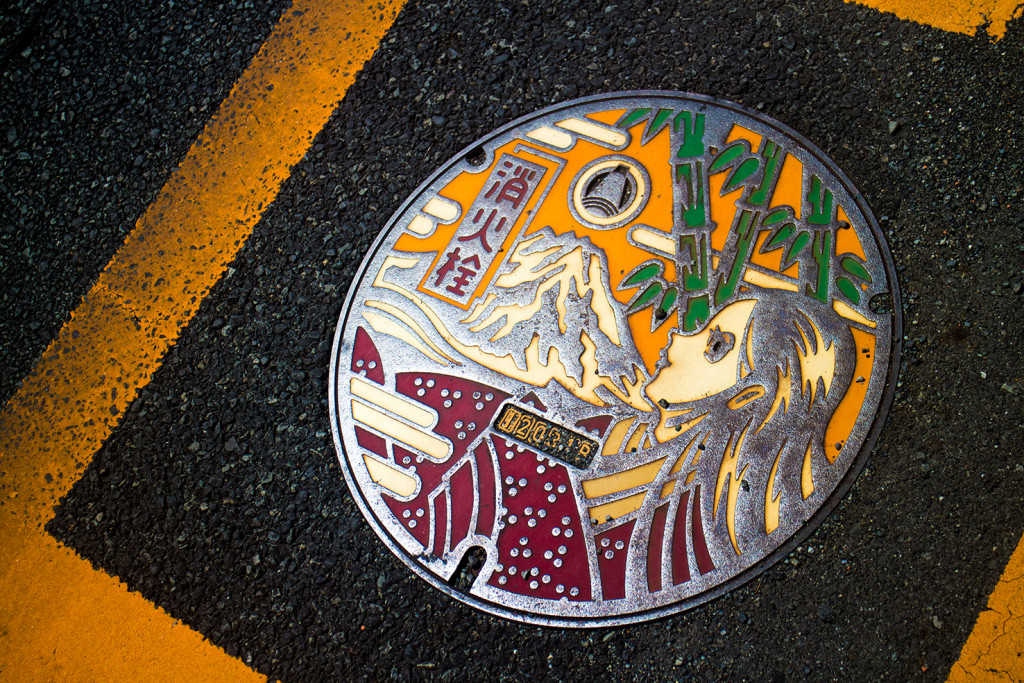 It was business as usual from here on out to Tokyo. I got a woodlouse infestation in one of my panniers on my last night of camping, which was irritating yet hilarious. I also made a guy on a bike who tried to overtake me ride into a lamppost after he’d bumped into one of my panniers. He wasn’t best pleased, and he probably didn’t understand my explanation that it was all his fault. 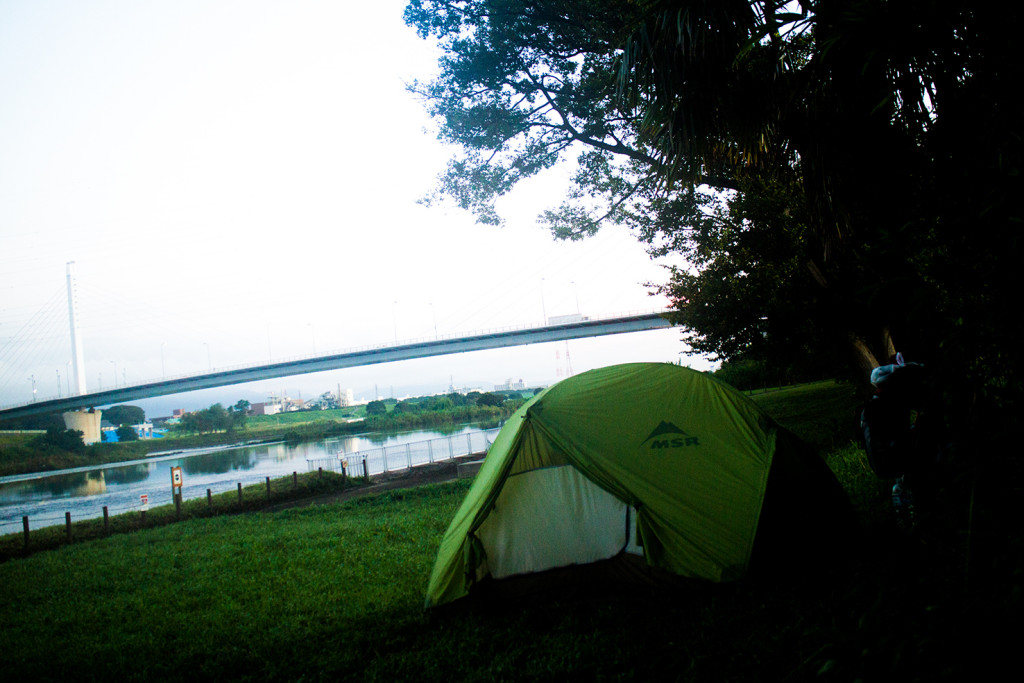 The site of the attack of the woodlice.

So that was it. I’m not sure whether it was the heat or all the city riding but I can distinctly remember thinking I was done with cycling for a while, I think it was partly due to being alone the majority of the time. Still, at least my Scottish accent’s coming on. 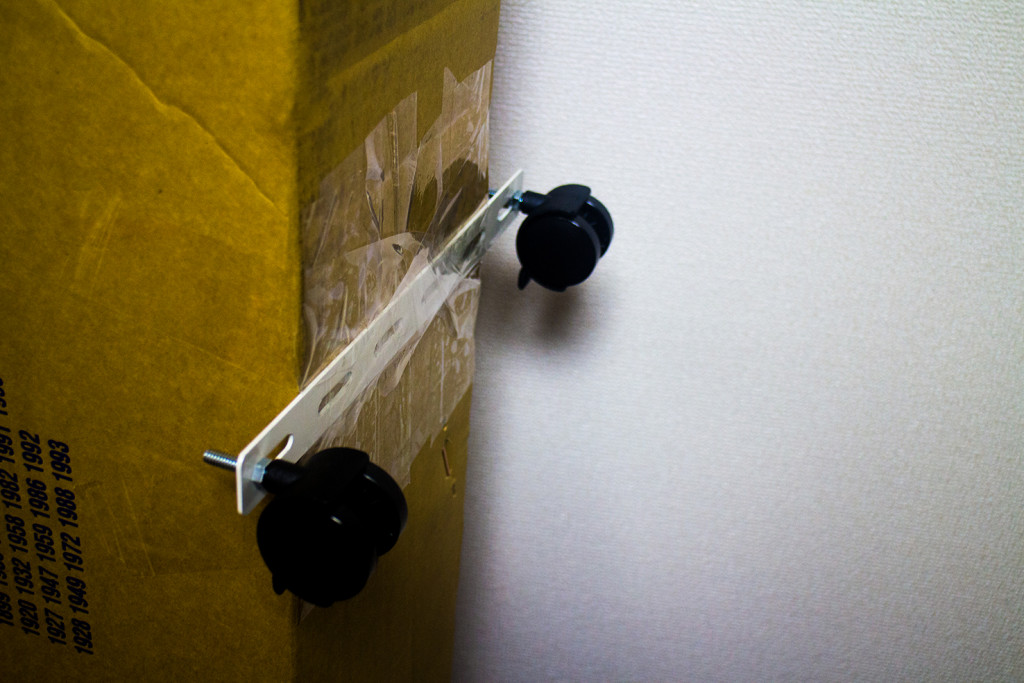 I made some wheels for my bike box so I could pull it around easily. 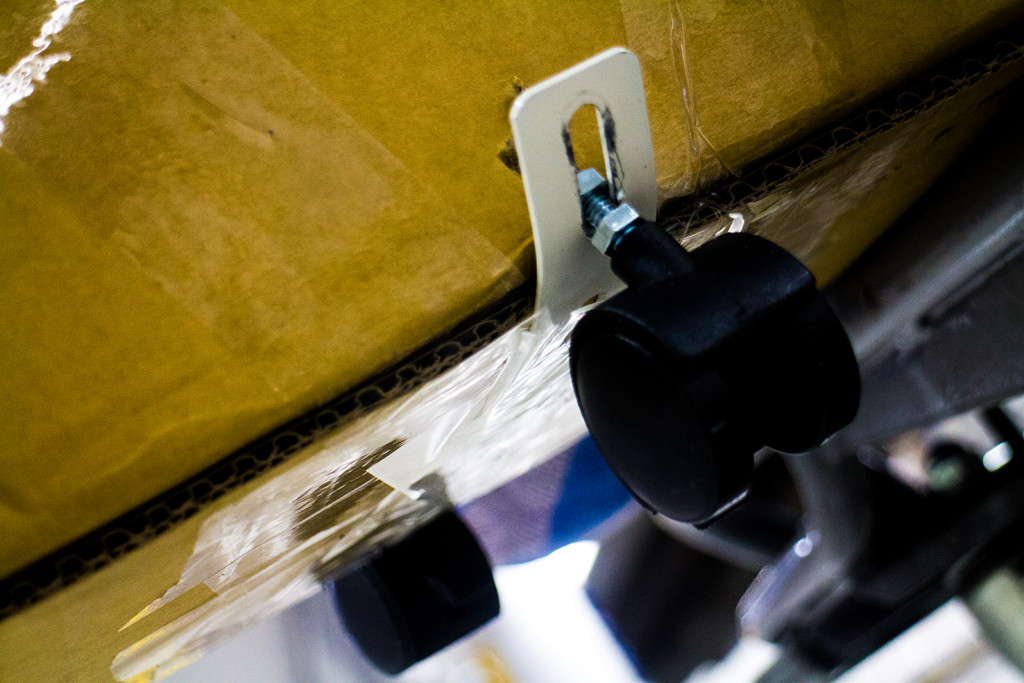 They broke within seconds.

Tokyo was, well, Tokyo. That’s probably the last of my Asian cycle touring. I think the take home thoughts are that you’ll never beat an old Asian man in a slow bike race, and there’s a lot of money in re-paving the streets of Asia. All of it. 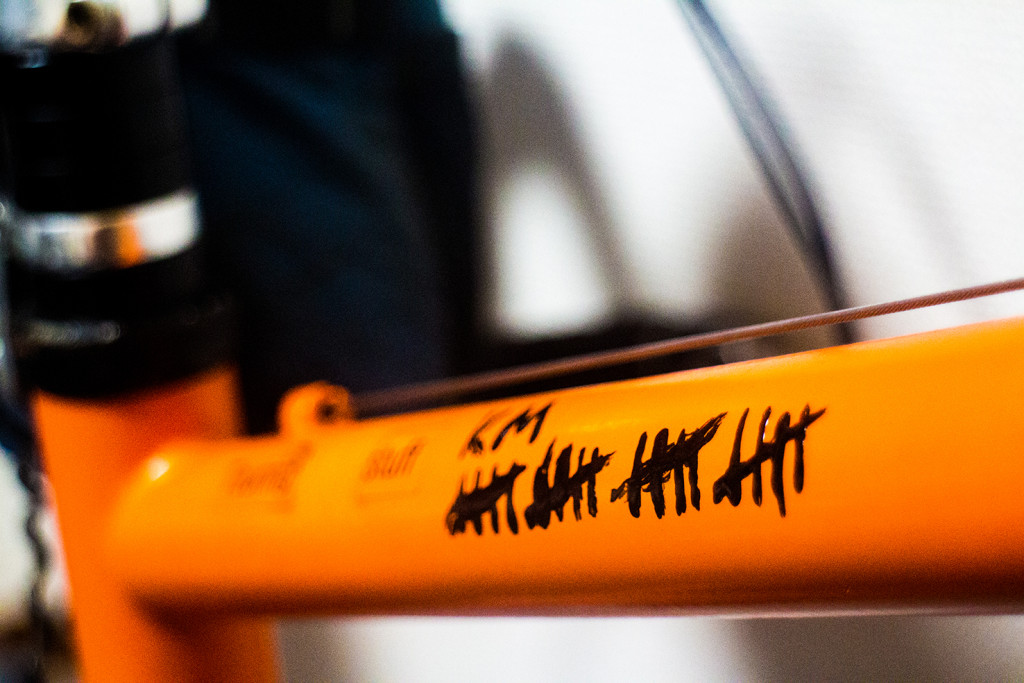