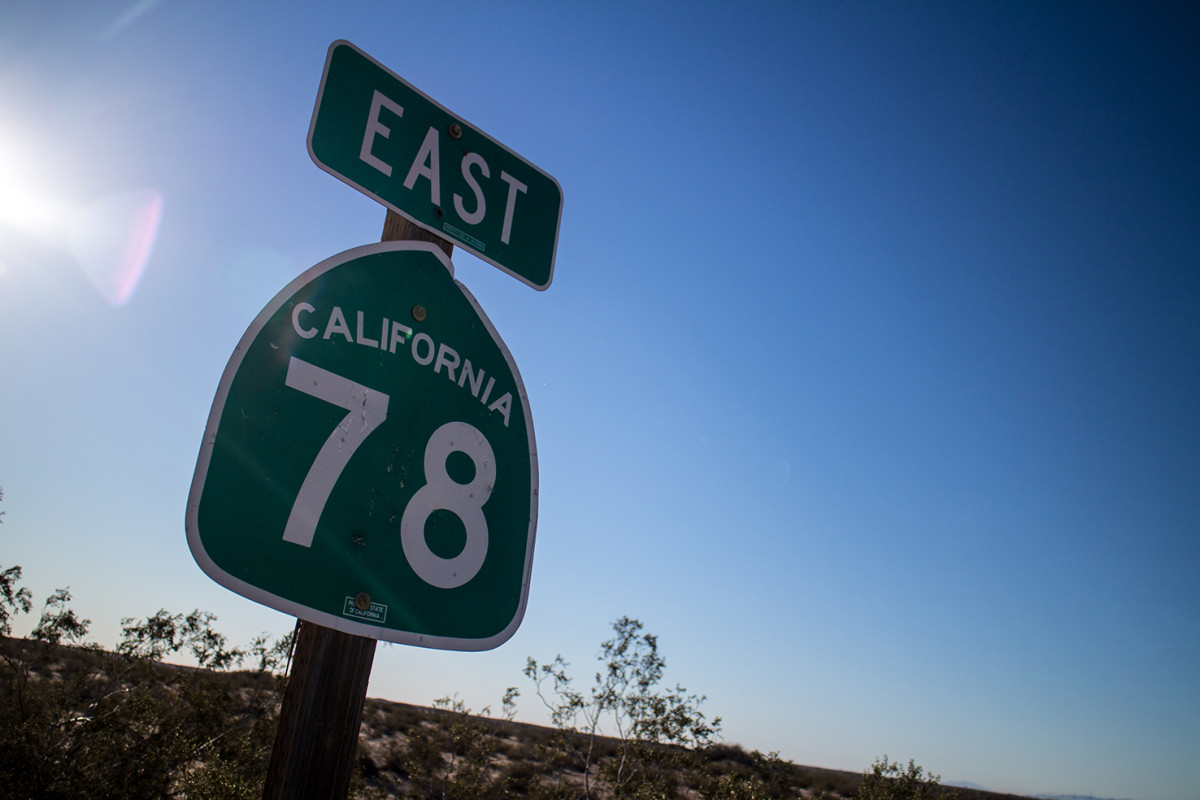 California has been in drout for six years. They were saving up all their best rain for my arrival.

After assembling The Buggernaut in the arrivals lobby of LA airport I had to immediately don the waterproofs and wait for three hours for the rain to subcede from ‘full-on piss it down’ to an acceptable level of ‘Manchester drizzle’. 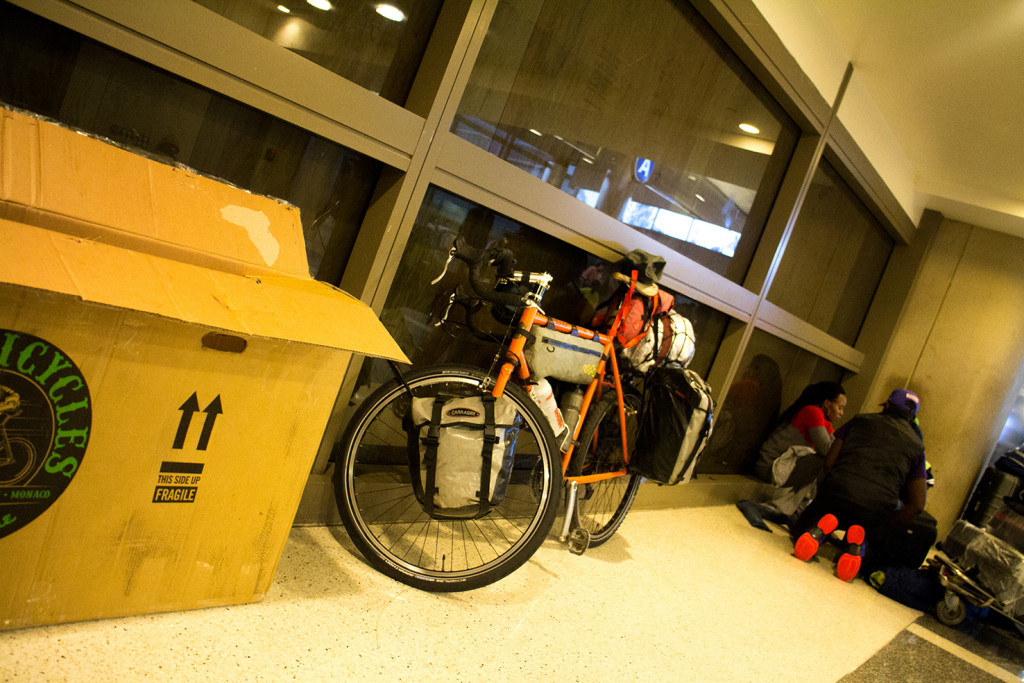 All aboard the Juggernaut. 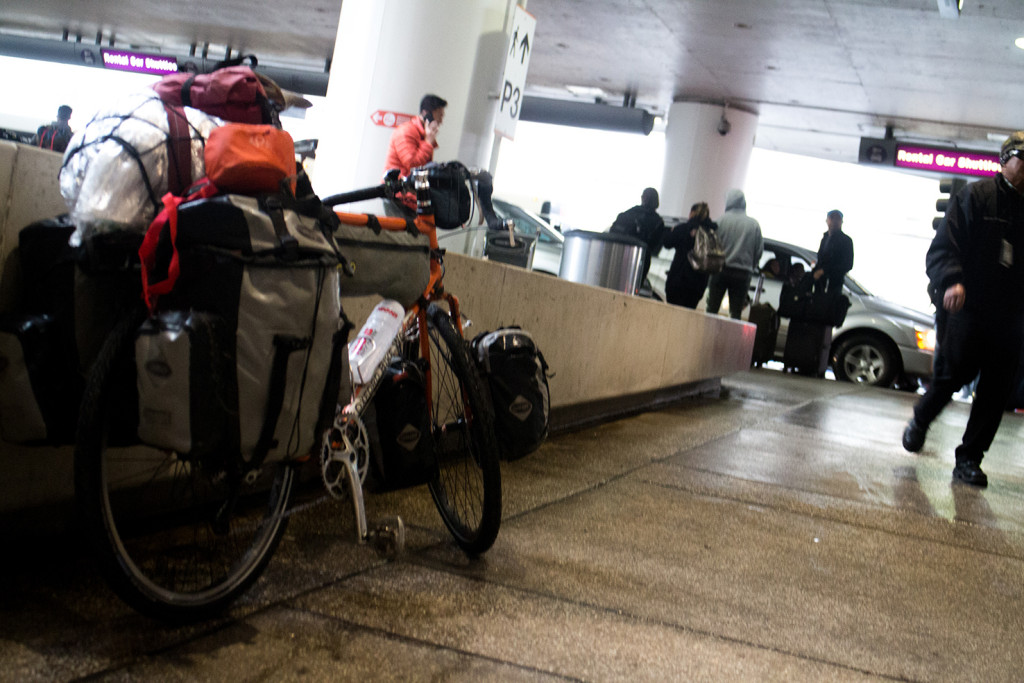 Maybe in a bit.

On the flight over I decided to watch Intersteller; a film about time and space and black holes and wormholes and all sorts of clever stuff like that. You can imagine my confusion when I checked the time and realised we’d landed two hours before I’d set off in Melbourne. I hadn’t realised Richard Branson had started running Virgin Time Machines.

After a year of being in the future I’m now playing catch up. Unfortunately, that also meant I’m a proper Rodney plonker and booked my Airbnb for the next day, so I had to go there and explain why I’d turned up a day early. I didn’t use the excuse ‘I’m a time traveller.’

I’m going to put it straight out there — LA is shite.

For every decent bit, there’s about four suburbs of shitheap to trawl through. Biking from the airport to Hollywood wasn’t a great idea, but it made me realise how good a job the guys at Rockstar did on GTA. Two lighter moments were watching a bloke dressed as a shit clown complete with massive bulbous shoes jumping out of a car and into a warehouse with the door being held open by some shady character, and a scrawny hood kid cycling all the way into the liquor store as if it was perfectly normal behaviour.

I popped into Downtown LA, that was shit, but at least it was interesting seeing as though lots of people had turned up to protest against Mr Trump’s inauguration. I wonder if they had big parties in the red states?

I was pretty happy to get out of Central LA and Hollywood. For such a world renowned place  it’s quite the shit-tip, and everyone seems to have some level of attitude, pent-up aggression or victim complex. There’s also some next-level homelessness going on that everyone seems to turn a blind eye to. Jonathan Pie recently did one of his angry rants about how homelessness is a symptom of a government that has failed. If that’s the case then America; you’ve bollocksed it right up.

Anyway, seeing as though I’d already cycled into LA through the rougharse ‘burbs, I decided to go the fancypants way out, high-rolling down Santa Monica Boulevard, past Beverly Hills towards the coast. Once I hit the seaside I rode down past Venice, Manhattan Beach and Redondo Beach. It was all eerily quiet. The recent storms had given everything an absolute pasting and the entire coastline was peppered with driftwood, torn up palm trees and miscellaneous debris. 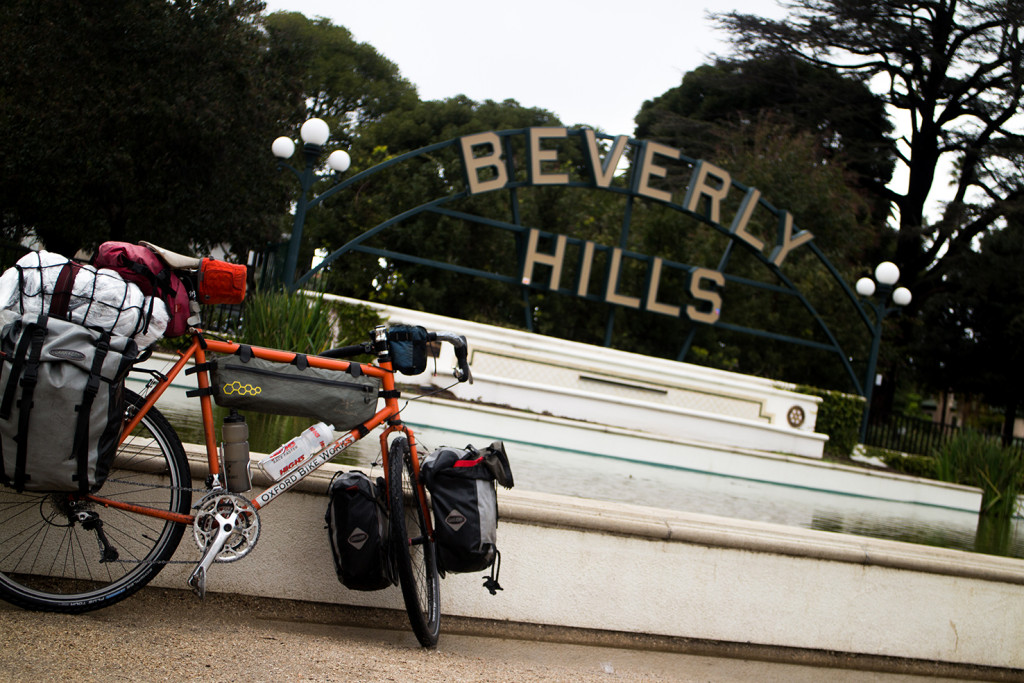 This bit was a bit fancy. 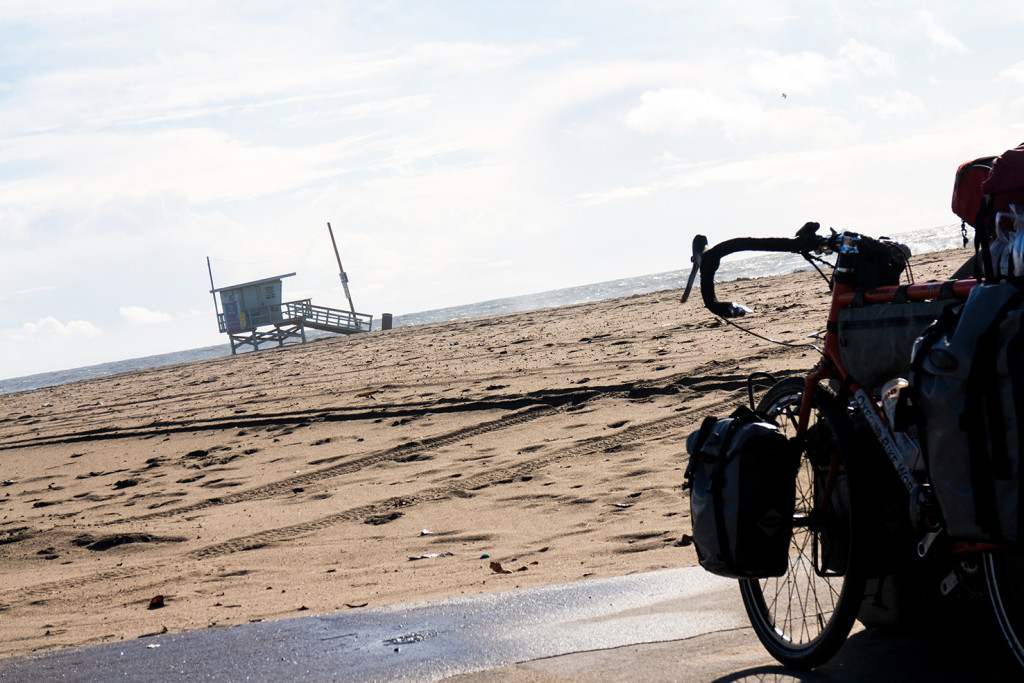 I had to rifle through my panniers for my red budgie smugglers.

I’d managed to get in touch with Ken and Kenny on Warmshowers and they were kind enough to host me the first night to kick things off. I already knew about Ken to be honest, he’s a Warmshowers stalwart, a board member, and regularly posts pictures of his guests, as well as keeping a guestbook and a photo album of everyone who passes through. It was quite humbling, truth be told. Ken and Kenny are great hosts and have an awesome level of enthusiasm, Warmshowers doesn’t get any warmer. 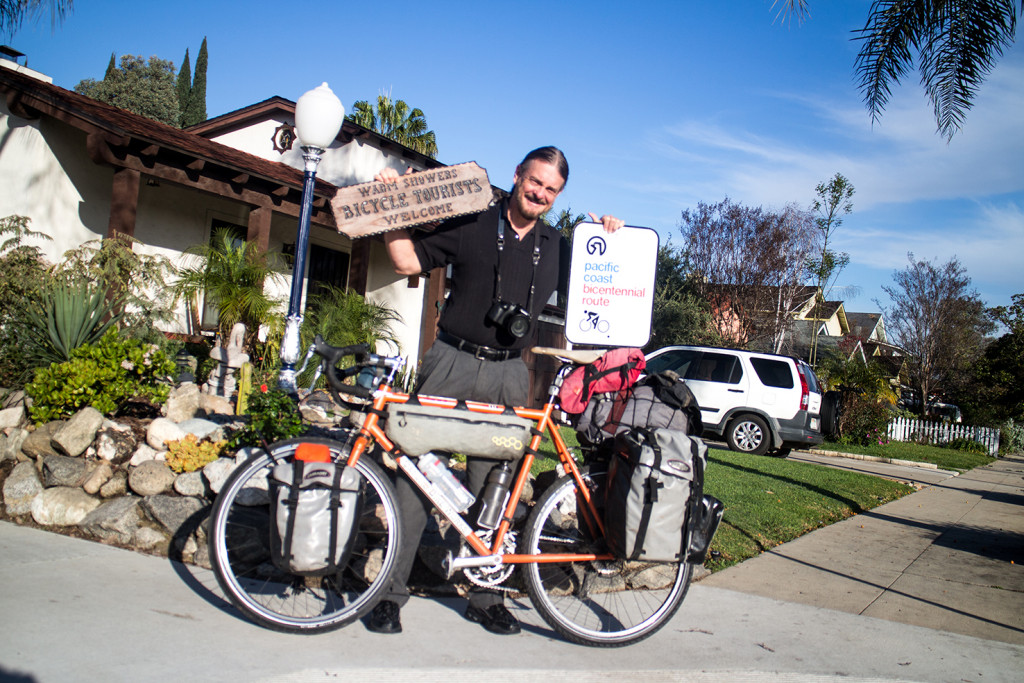 So the plan for America — go south for a little bit, then east for a really long bit, get to Florida, fly to Europe before we actually leave it. Easy.

Heading south down the coast on the Pacific Highway was nice and easy, and I seemed to be getting some decent weather as opposed to the storms I’d been hiding from for the last few days. 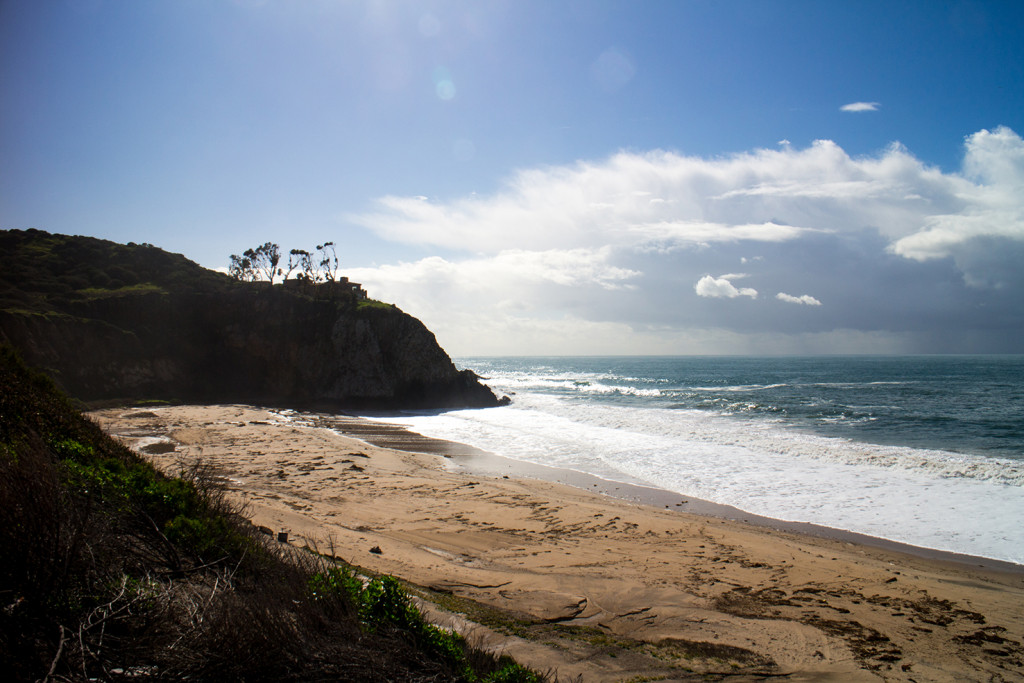 Enough blue there to make a pair of sailor’s trousers. 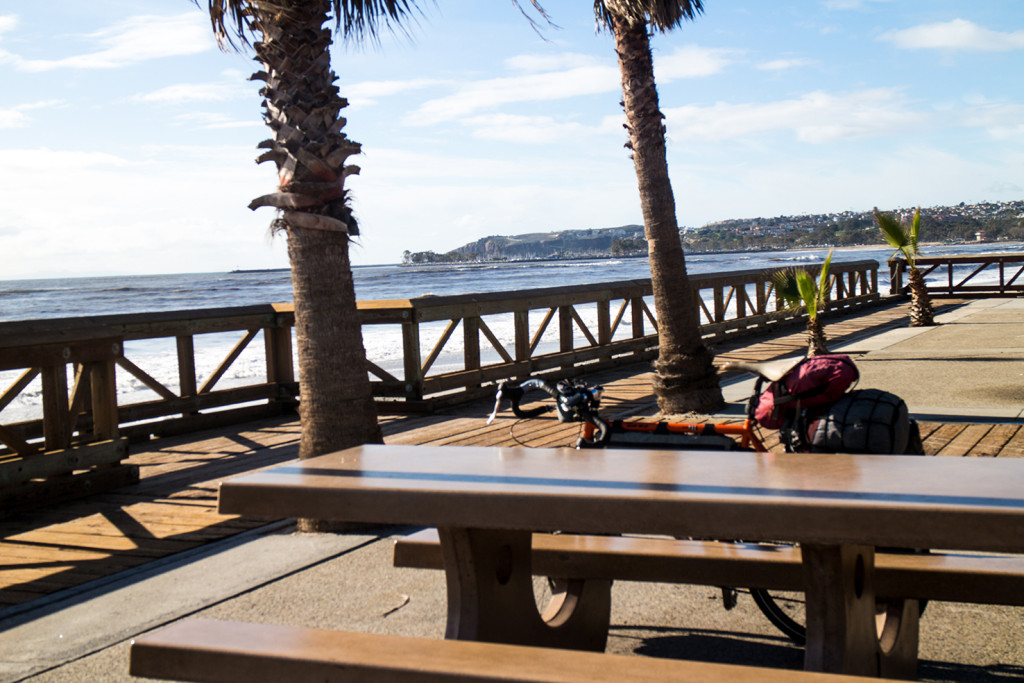 I got caught out by the sunset on the first night of camping. Having come up from Down Under I was still expecting summertime hours and not this dark at half five business, which kind of made it an unfortunate time to run into a 15km stretch of military zone then. It turned out the bicycle route runs through it, and with a passport check with an officer I was punting it through at dusk.

If I’m honest the military zone was kind of fun, they had the big paratrooper choppers circling on the beach and camo trucks out in full force, the only problem was I was fresh out of sunlight, and after the military zone it was another 25km of residential space until I found a campsite at San Elijo which had reasonable rates for bikers. 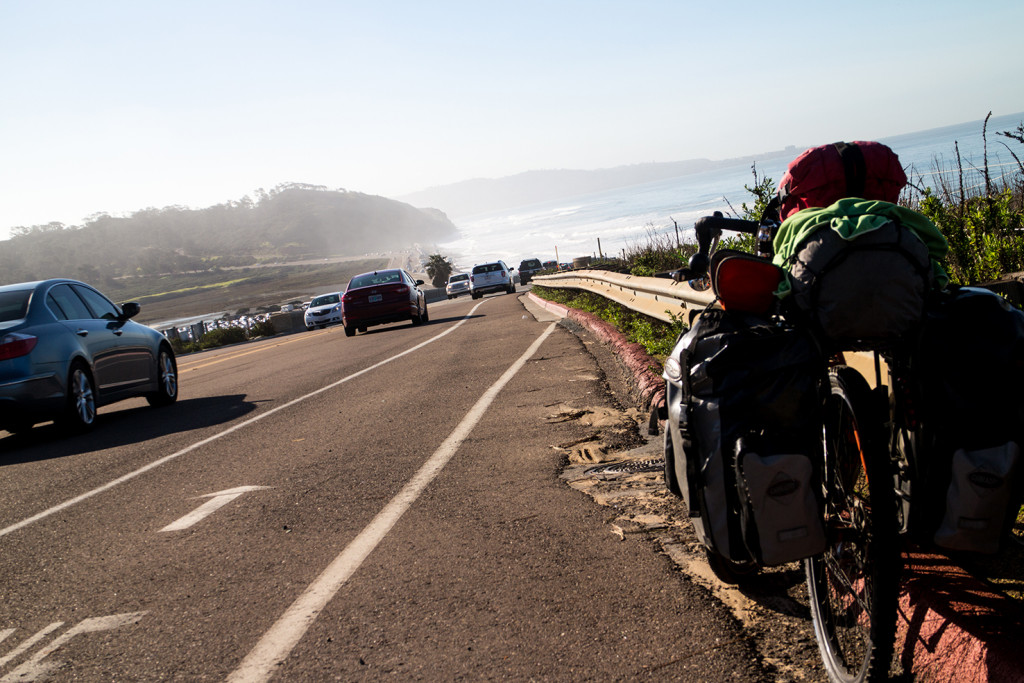 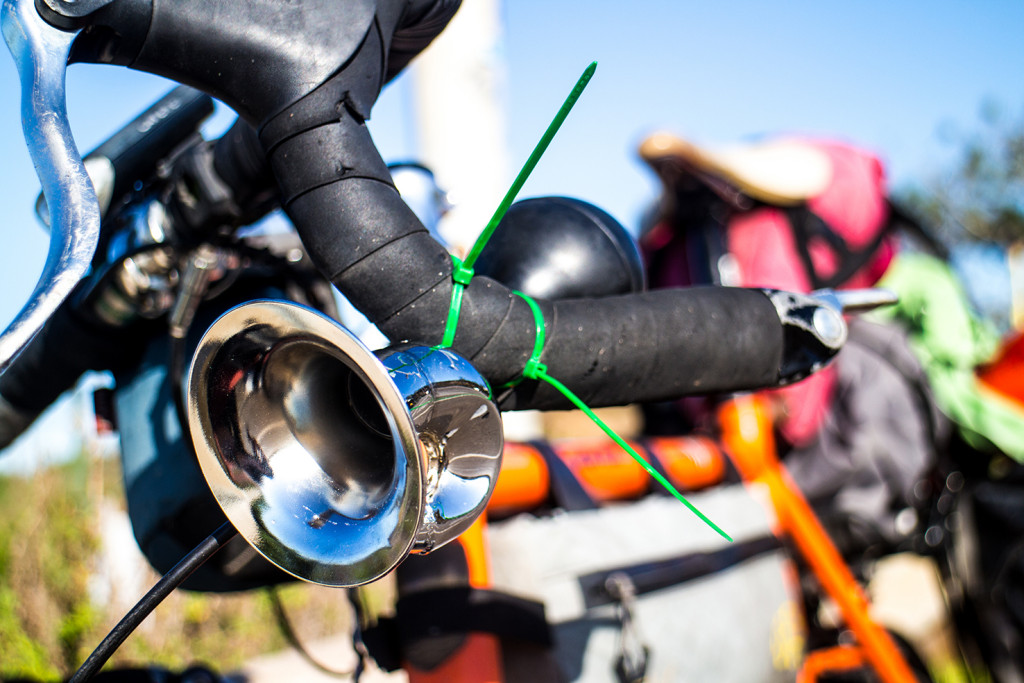 Ladies and Gentlemen – The Honker.

I ditched the idea of heading into San Diego for a day in favour of splitting off East and heading inland. It was pretty much rolling hills and steady climbing on the menu for a couple of days, and it looked like I’d timed it pretty well by the snow in the mountains. Still, even though the snow wasn’t falling, it was effing cold in the mornings with a hefty layer of frost on the tent. At this point I was pretty happy with my decision to keep lugging round a high-power sleeping bag. 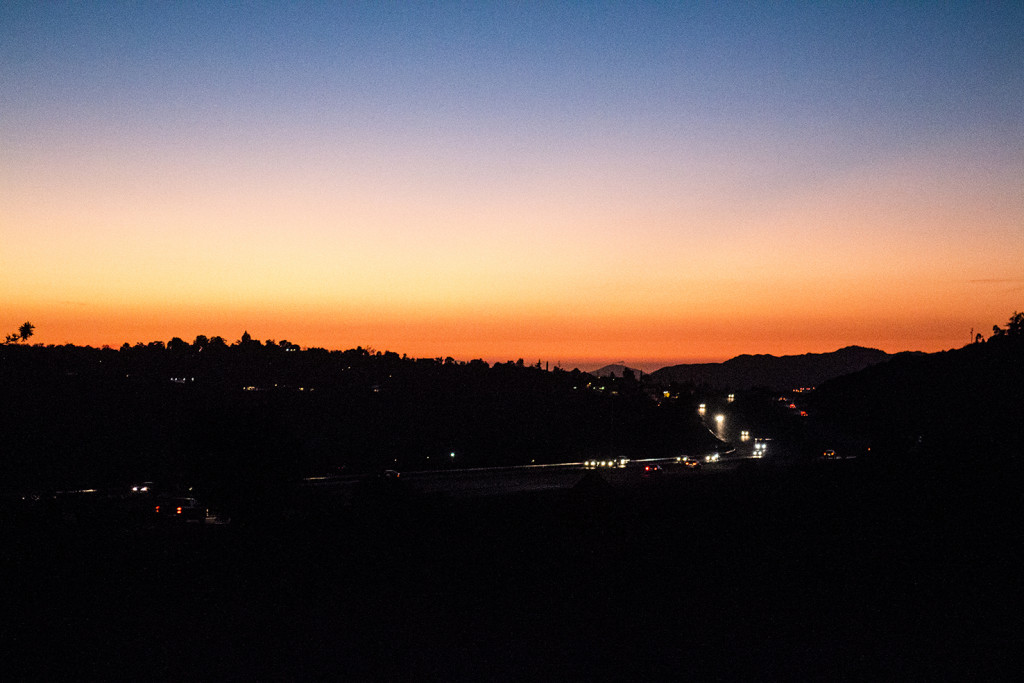 I had a chat with Border Control at almost the top of the mountains, they gave me the run down of what to expect; apparently I had a 4000ft descent to a desert that was below sea level, which sounded pretty cool. He didn’t however tell me about the freezing headwind for the entire descent. It turned out to be one of the coldest moments I’ve experienced, the wind cut through everything I had. I even fished out the Kazakh roadworker rubber-dipped gloves, something I’d thought (or hoped) had been condemned to the bottom of my panniers forever. 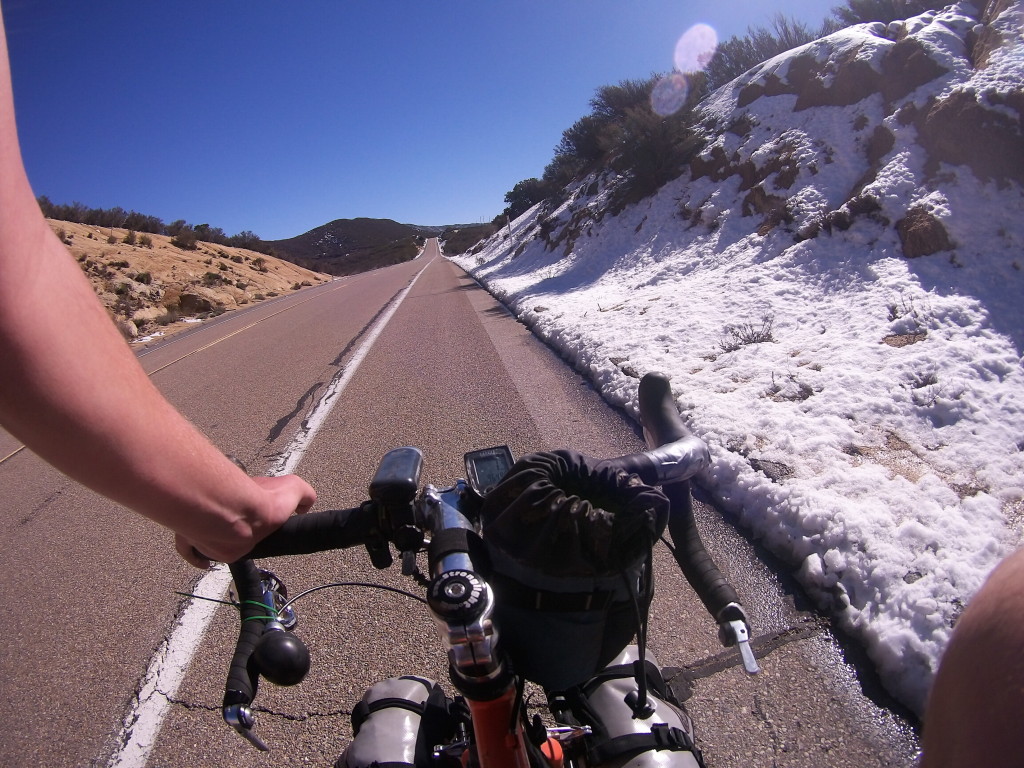 I hadn’t banked on snow. Still rocking the shorts and t-shirt though. 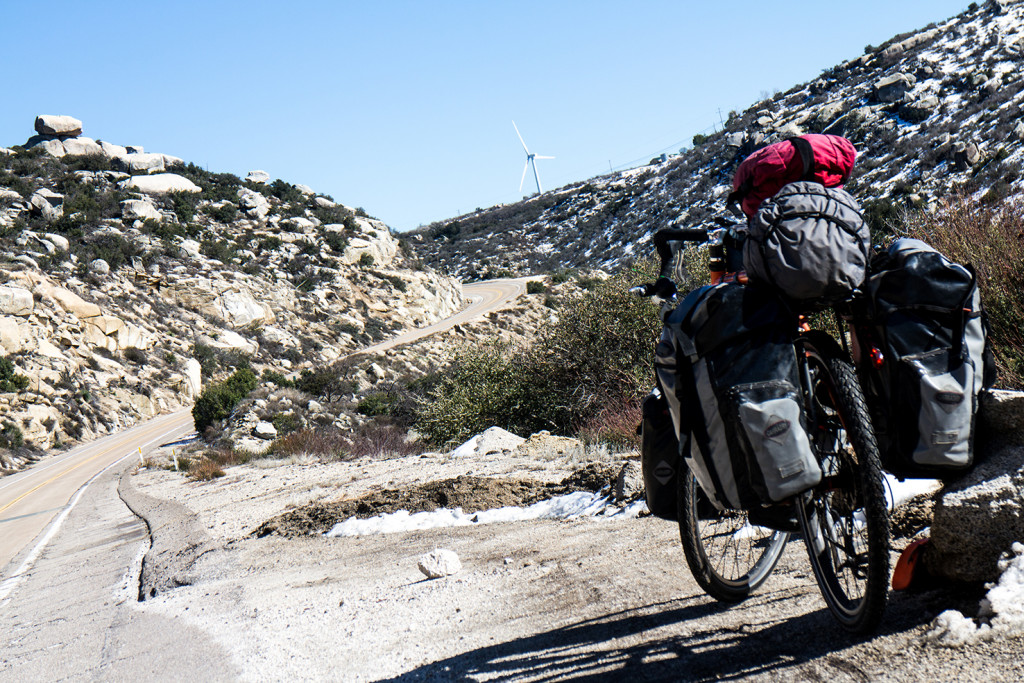 At this point the wind was nipple-shrinkingly cold. 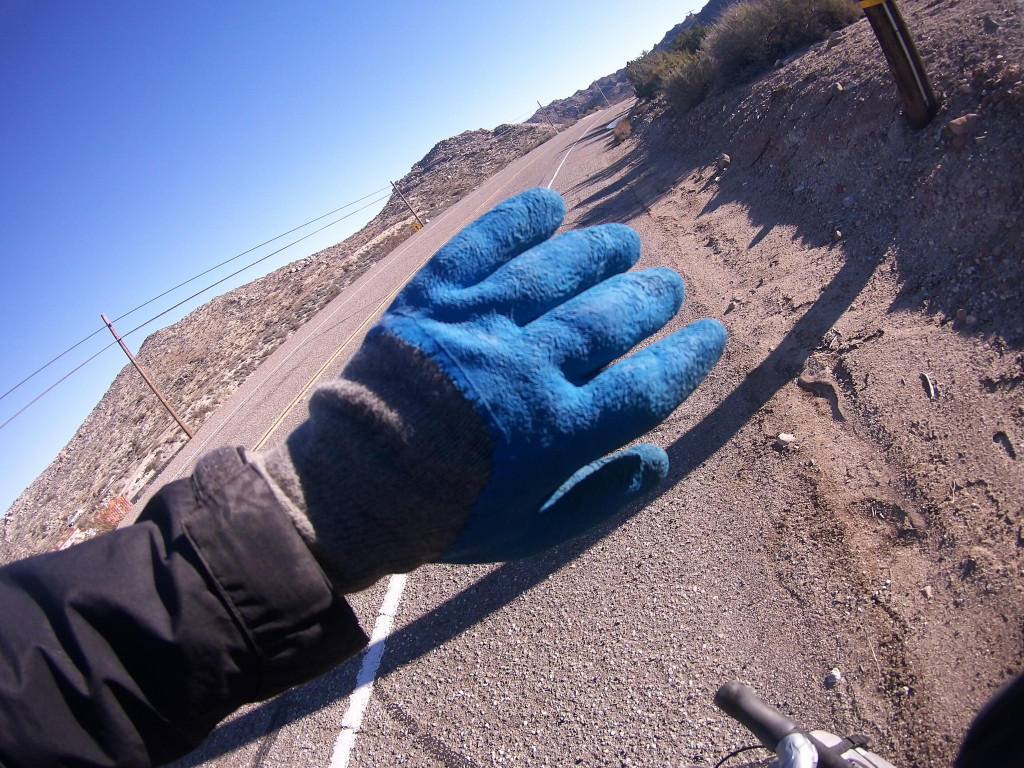 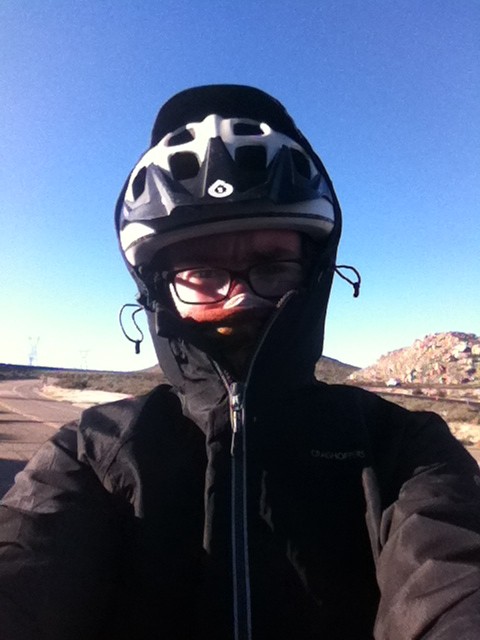 Just before the downhill section I met a bloke who was pretty much Ned Ryerson from Groundhog Day as I was having a look at the soon to be upgraded border fence. The conversation went like this –

Ned: ‘No, I know you. I saw you earlier on by the bridge. I’m on a daytrip down the Old Highway 80 and blahblahblahbleuurgh…’

I think he’d got confused with having seen someone and knowing someone, and I’m all for a chat with random people on the road, but by now I’ve realised that a lot of Americans just won’t stop monologuing until you just start moving away. On the first day I got stuck talking to a supermarket security guard about real estate and God for half an hour. Maybe I’m just too polite, and by the end of this trip, I’ll have the ability to shut down inane bullshit conversation with ease. 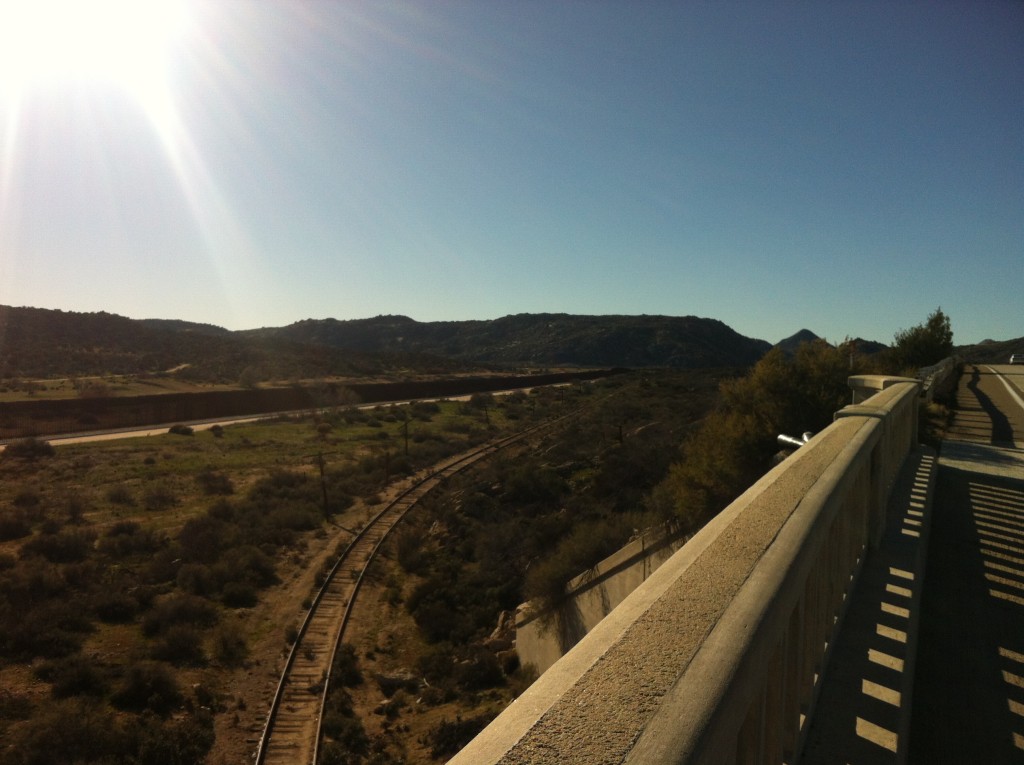 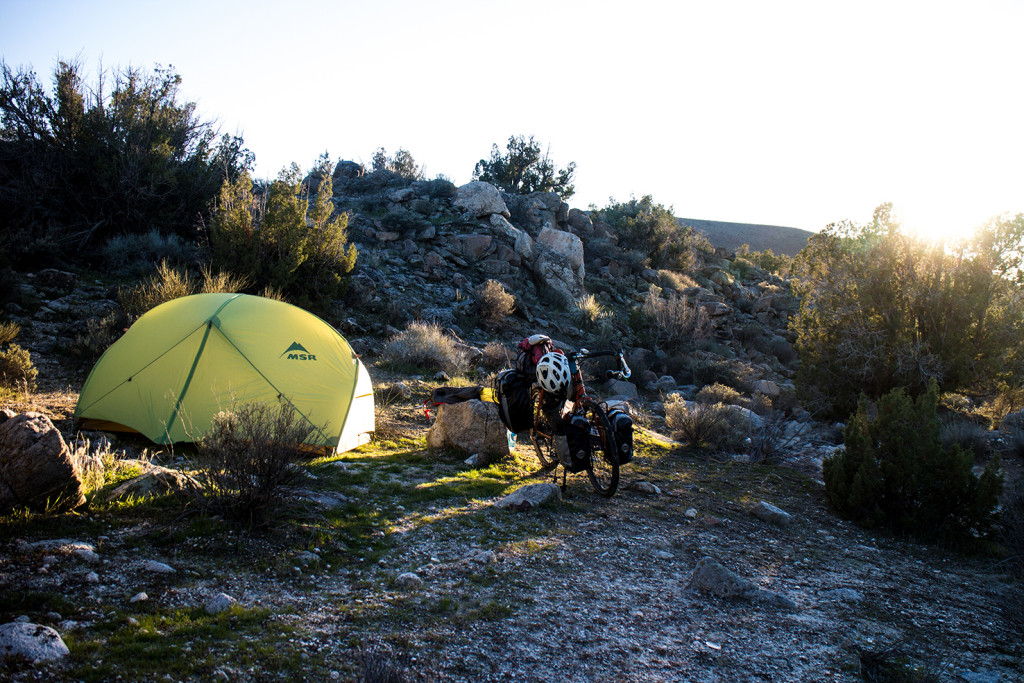 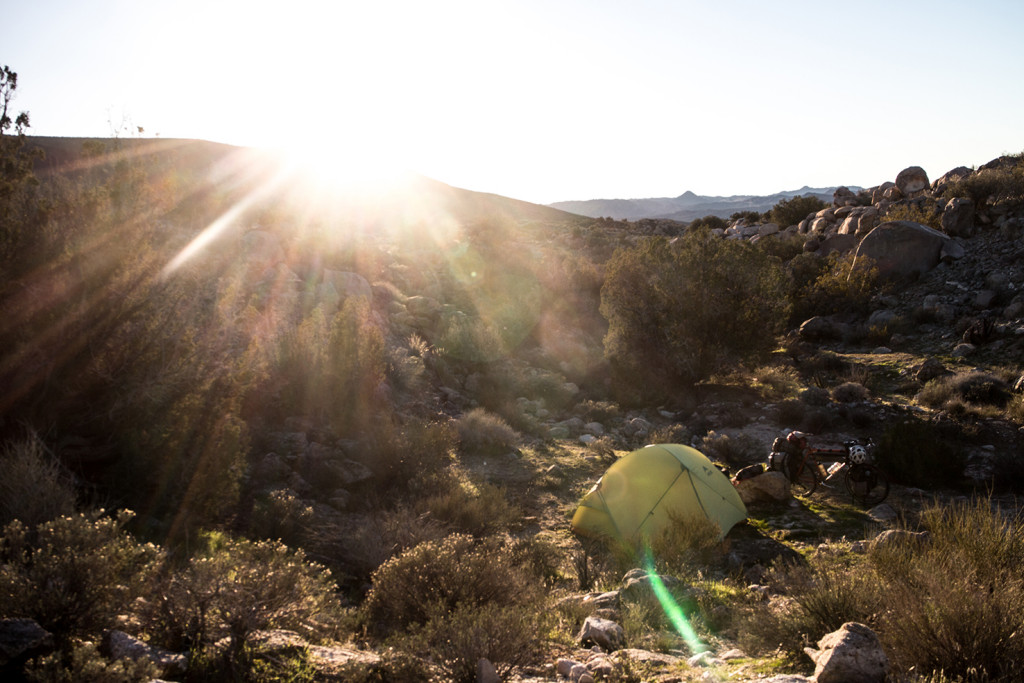 Down below sea level in the Yuha desert was a bit warmer, but just as windy, which meant I traded cold for being lashed with sand for a few hours. This was my first slice of American desert life. It’s exactly how you’d imagine; tumbleweeds, cacti,  everything beat up and rusted, including the people. 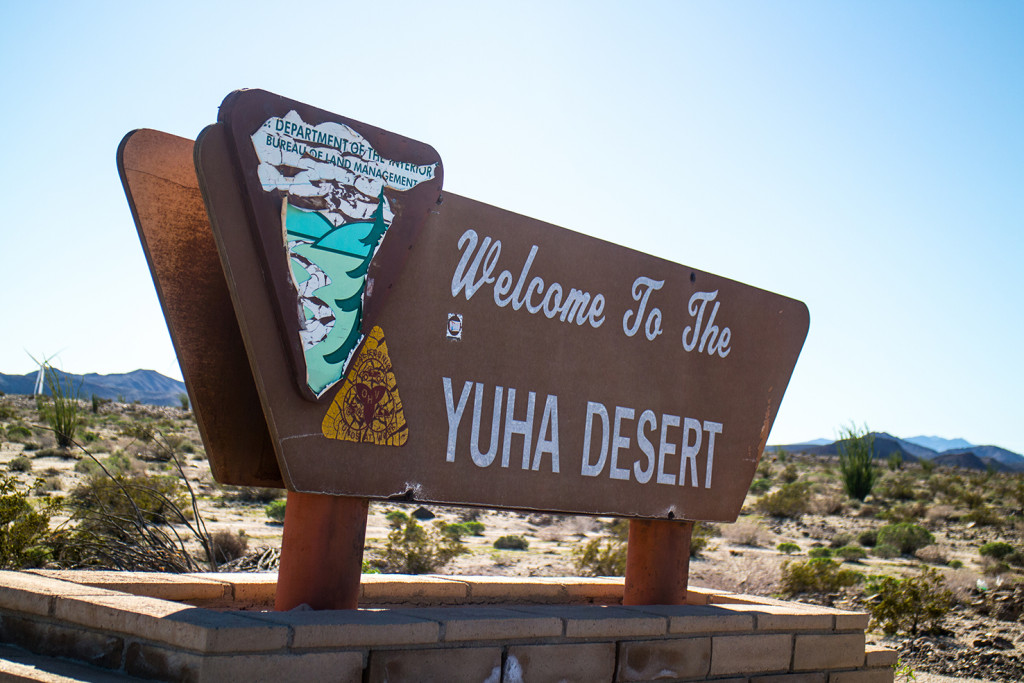 Optionally, you could also pour a handful of sand in your mouth, turn the heating up and not wash for a week, then you’ll almost replicate the same feeling I felt cycling through Glamis sand dunes. 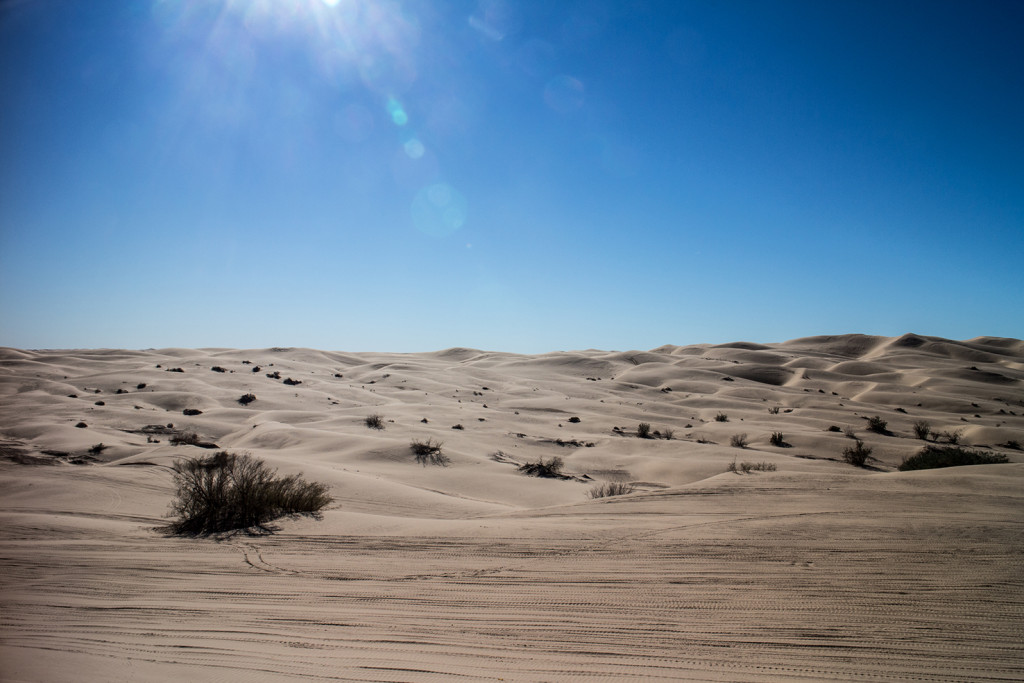 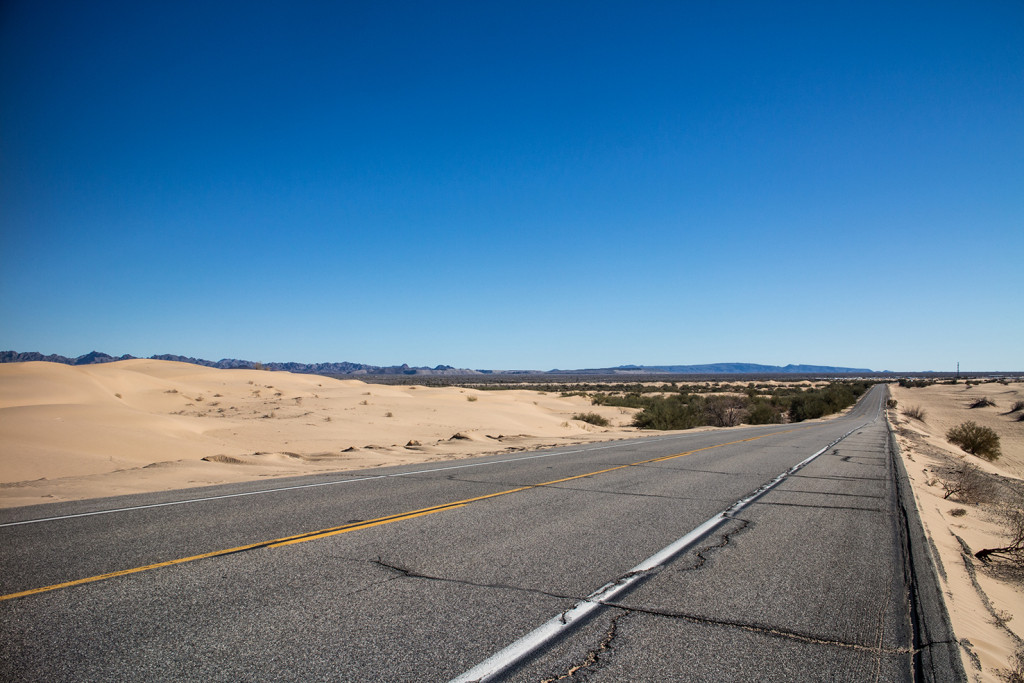 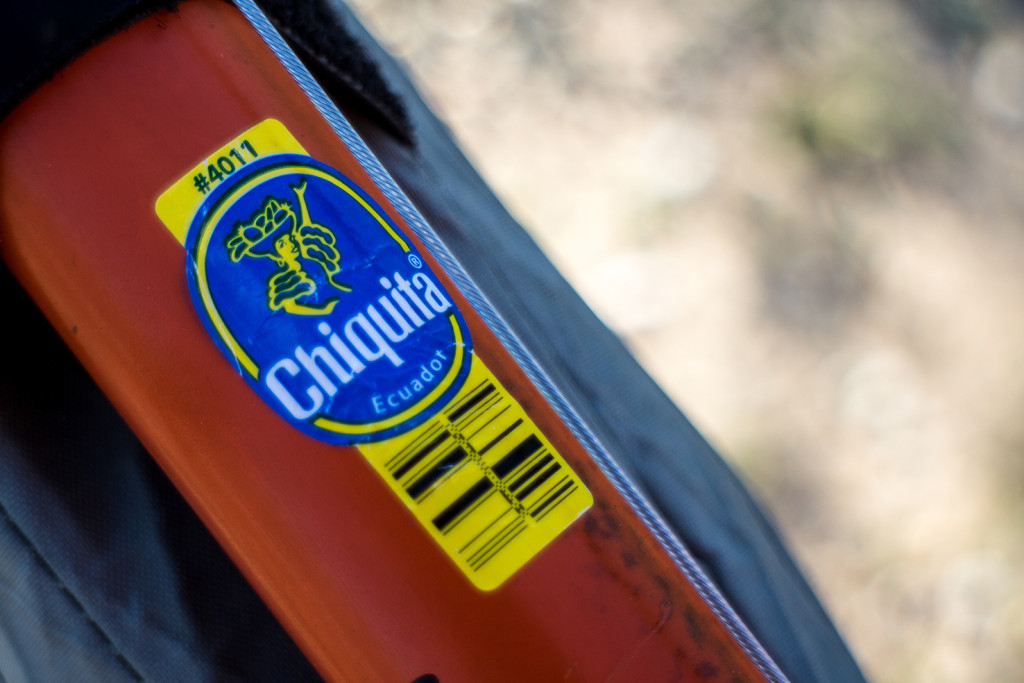 Unfortunately, these gave way to a desert stretch with rolling dips on an extremely narrow road with a headwind rating of ‘absolute bastard’ for fifty miles. 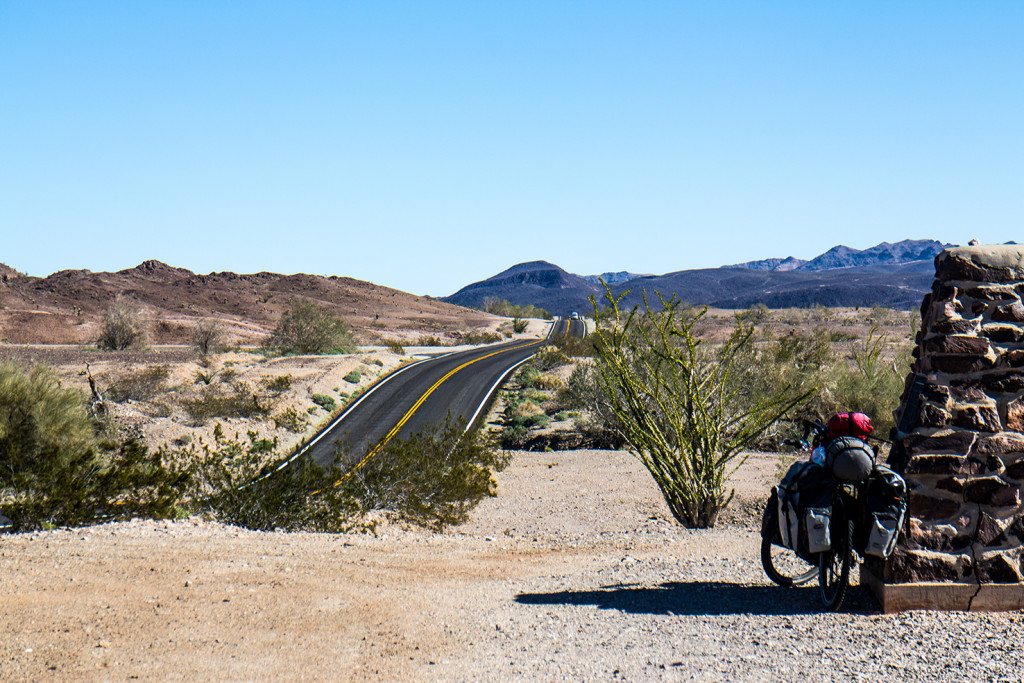 That left me in Blythe, the border town before Arizona, which seemed to be some kind of fast food retail park. To celebrate, I had a rootbeer.